The future of communications is 5G, and today three major companies jointly made a big step towards the next-gen connectivity. Oppo announced in a press release that it has conducted a VoNR call on one of its own commercial handsets with a Mediatek Dimensity 1000L chipset (that's the Oppo Reno3 5G) over a 5G SA network environment, provided by Ericsson. 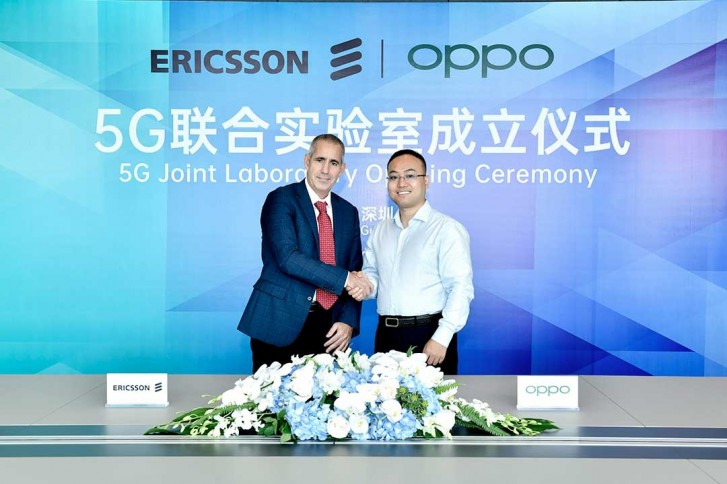 Luca Orsini, Head of Networks and VP, MNEA, Ericsson and Andy Wu, VP of Oppo and President of Software Engineering

The press release stated that the VoNR had significantly lower latency, improved sound quality and picture quality, which will eventually lead to “an elevated overall experience for users”. Andy Wu, VP and President of Software Engineering Business Unit at Oppo said the company “proactively works to accelerate large-scale commercialization of 5G”.

VoNR stands for Voice over New Radio with New Radio being the official name of the 5G networks. This means it can place a phone call relying entirely on the 5G architecture. SA differs from the NSA (non-standalone) with the ability to operate through its own antennas, instead of using the LTE infrastructure.

The experiment was conducted at Ericsson’s HQ, based in Stockholm, Sweden. The phones on both sides of the call connected almost instantly “and then seamlessly switched to a high-definition video call with a single keypress”, the press release added.

Your last sentence answered your own whole comment. Once there is a bespoke 5G architecture, 4G would be obsolete and possibly redundant.

Quote, "VoNR stands for Voice over New Radio with New Radio being the official name of the 5G networks. This means it can place a phone call relying entirely on the 5G architecture." Forgive my naiviety, but would anyone care to explain what the...