You’ve already seen the LG GC900 in our MWC 2009 coverage hung behind glass without a word on specs details. Dubbed as LG Viewty 2, this 8 megapixel fella is obviously set to arrive in Orange UK network some time in Q2 2009.

According to some leaked information (a sneak peak of Orange UK release schedule) the LG GC900 or otherwise known as LG Viewty 2 is planned to hit the shelves in June this year. We guess that means an official announcement is due quite soon.

The LG GC900 packs an 8 megapixel camera with autofocus and face tracking and a 3" WVGA touchscreen display. The S-Class Touch UI will also be aboard along with DivX/Xvid support as well as the Dolby Mobile technology.

According to a leaked specs list the LG Viewty II is expected to have a xenon flash (although one is not found on the unit at the MWC 2009), Wi-Fi and HSDPA support and GPS.

Sounds much like the Renoir, doesn't it? With the slight difference that the KC910 Renoir lacks the heavily promoted S-Class Touch UI and the practically endless 32 GB in-built memory the GC900 is rumored to come with. 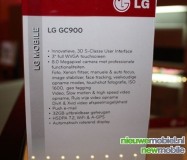 By the way, Samsung Omnia HD is also due in June along with the highly anticipated iPhone 2009, Nokia N97 and Sony Ericsson W995. Yep, this summer is about to be hotter than ever.

And while you're waiting for more details to pop up, take a look at our LG Arena preview for a complete scoop of the new S-class interface by LG.

I've also got a Viewty1 but dont find that the flash is poor! I think the flash is actually pretty good in comparison to phones that were released around the same time as Viewty1 -- cant wait for this to be released, any hint of a release date?

I've had a Viewty for 1 year now. I'm not a fan of any brand I like phones for their own merit. If the specs of Viewty 2 are true then LG have improved the 4 main drawbacks of Viewty 1 1) A hopefully capable xenon flash (the led on Viewty 1 is us...