The Poco F4 looks like a smartphone from 2022 from the front. It's practically all-screen with a tiny centered hole punch for the camera, small bezels on three sides, and a slightly larger chin. We've seen this formula a lot before, but we're not complaining. Sure, the chin could have been exactly as narrow as the rest of the bezels, but that's just nitpicking at this price point. 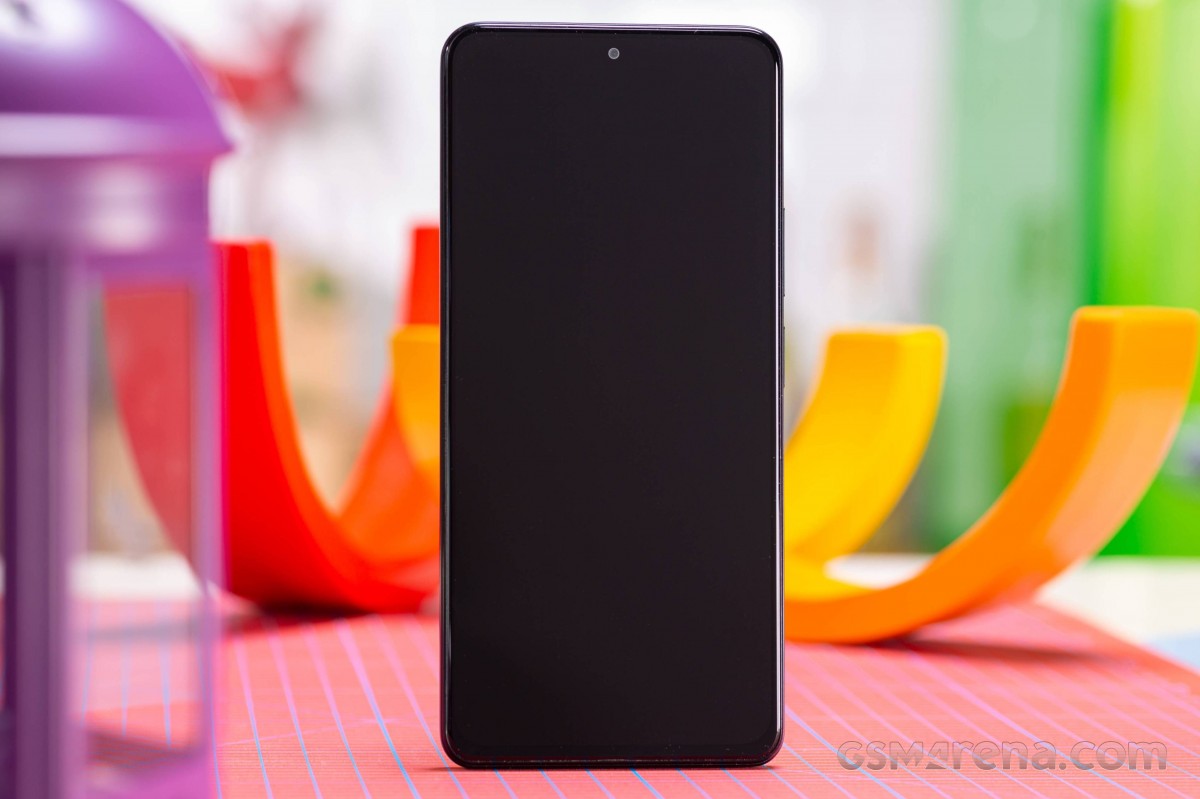 More annoying is the silver ring around the selfie camera, which serves no purpose other than to draw attention to itself constantly as light reflects off of it. The whole point of tiny hole-punch cutouts was supposed to be to make the camera pretty much 'disappear' in the sea of screen surrounding it, and that entire idea is completely negated by this silver ring. Baffling choice, but definitely something you can get used to pretty quickly. 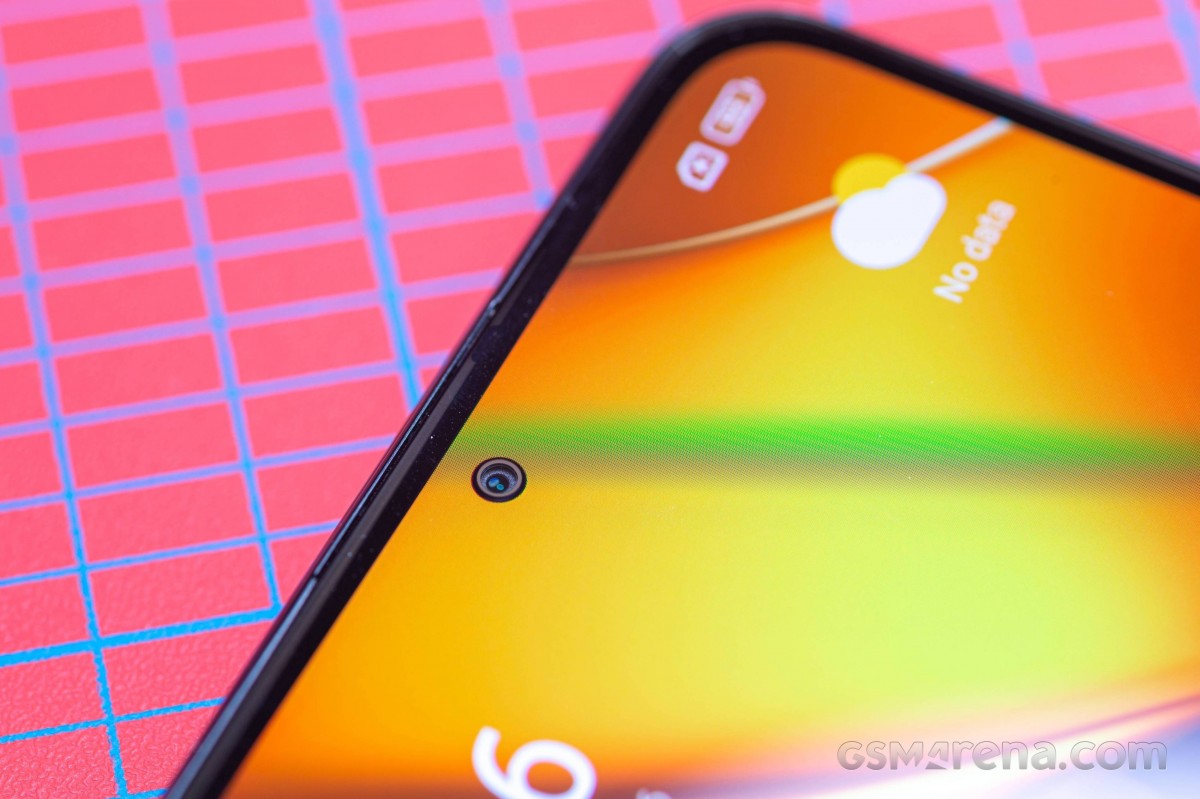 The frame is plastic, in an obvious cost-cutting measure, and it's also pretty flat because every Chinese smartphone maker needs to copy Apple's designs for whatever reason. Unlike others, we don't really have a strong opinion on flat-framed devices, we find them fine, not particularly exciting, but not particularly annoying either. The plastic build will come through in how the frame isn't as cold as a metal one would be, and if you're put off by that, you should probably be looking elsewhere. 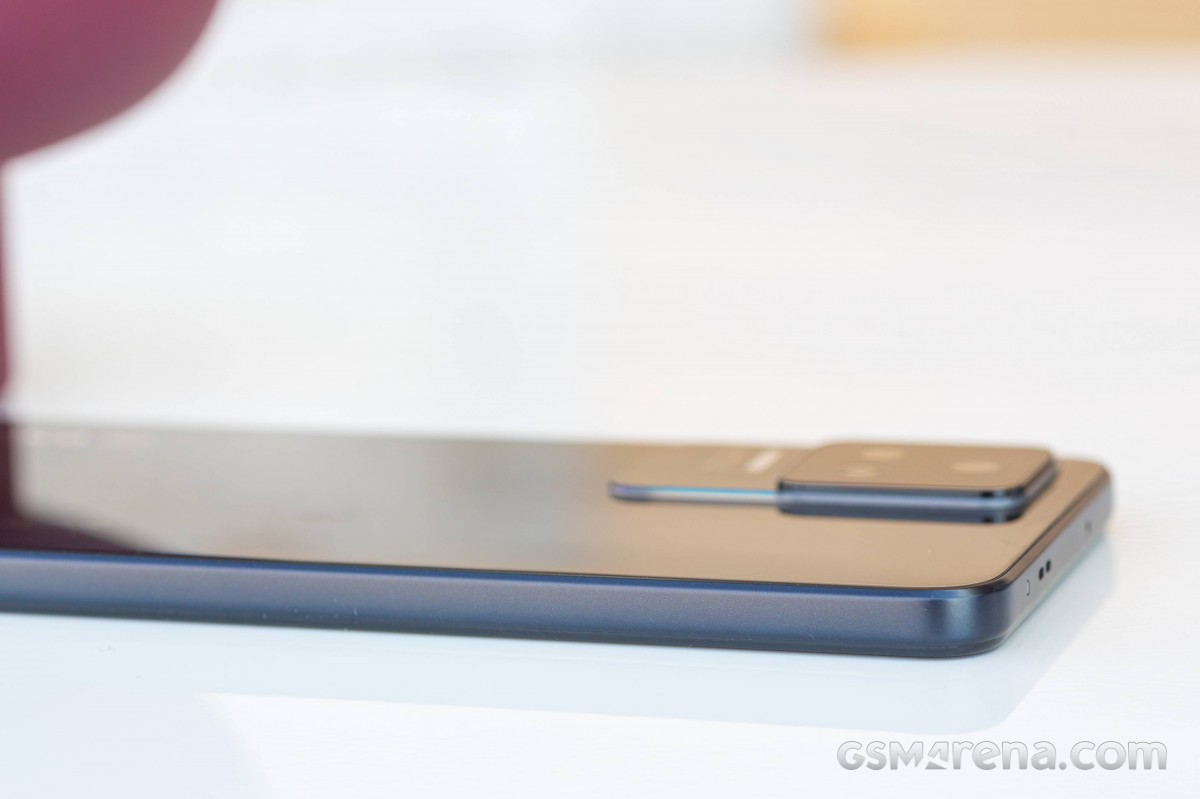 It's good to note that this is not the most premium feeling phone to hold because you are simply touching more plastic than with a non-flat frame. Any other device with a plastic frame that isn't this flat will feel less plasticky by design. If you mind that, you've been warned. If you plan to use a case, this entire point is moot.

The back of the Poco F4 has glass on it, which is a step up in the premiumness factor, and a weirdly looking two-step camera island that takes it back down a notch. We can't really explain why, but the main, thickest part of the island, where the three sensors are, just doesn't really look all that glamorous. It screams cheap(er) phone, but in a subtle way. A whispered scream, if you will. The strange two-step design, unfortunately, does draw a lot of attention, however, and we're still unsure why the LED flash array needed its own hump - is it really that deep? 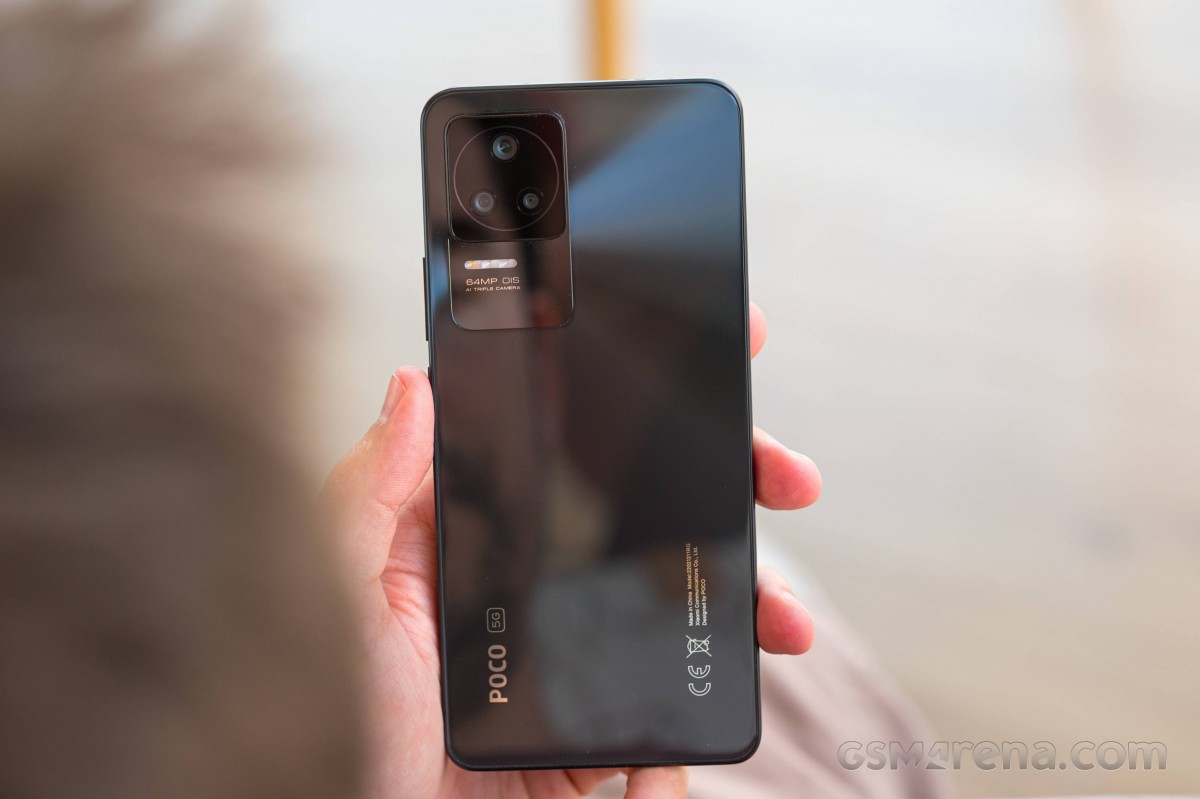 Anyway, the obligatory text on the camera bump is less obnoxious than some others we've seen, but still completely superfluous. No one needs to read "64 MP OIS AI TRIPLE CAMERA" on the back of your phone, for any reason. Ever. Period. At least these words do make some semblance of sense (with the very loose meaning of "AI" of course), unlike what we've encountered on the back of the Poco F4 GT in a previous long-term review where the words on the camera island read: "Freezing. Speediest." Still, from where we're standing, text on camera islands is always completely unnecessary unless it's camera specs and even that is hard to justify on a phone. 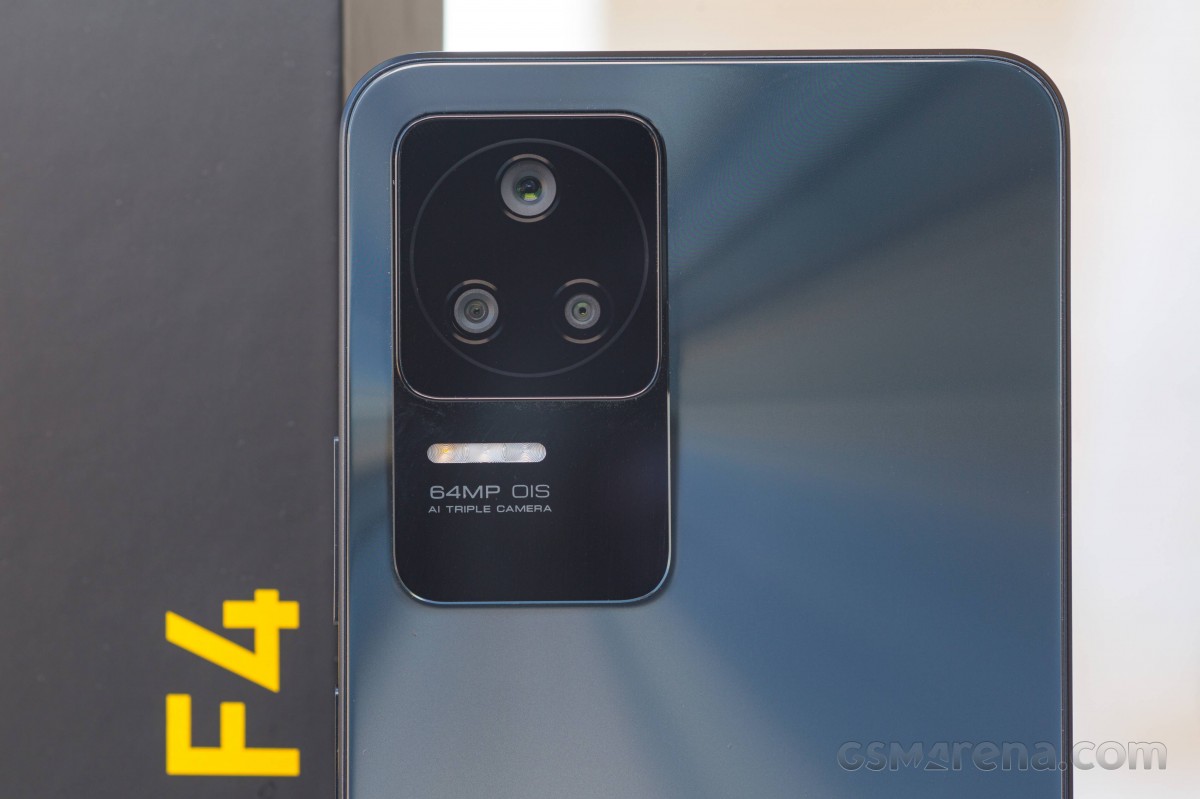 On the other hand, the regulatory paragraph in the lower right side of the back is actually necessary, which is an unfortunate reality in Europe. This is also where you can point to if Poco insists on telling you that it's a completely independent brand. We've had smartphones for so long, and yet the European authorities still can't make all of this text go away? Perhaps they're too busy mandating charging standards. Maybe next year? We can hope. 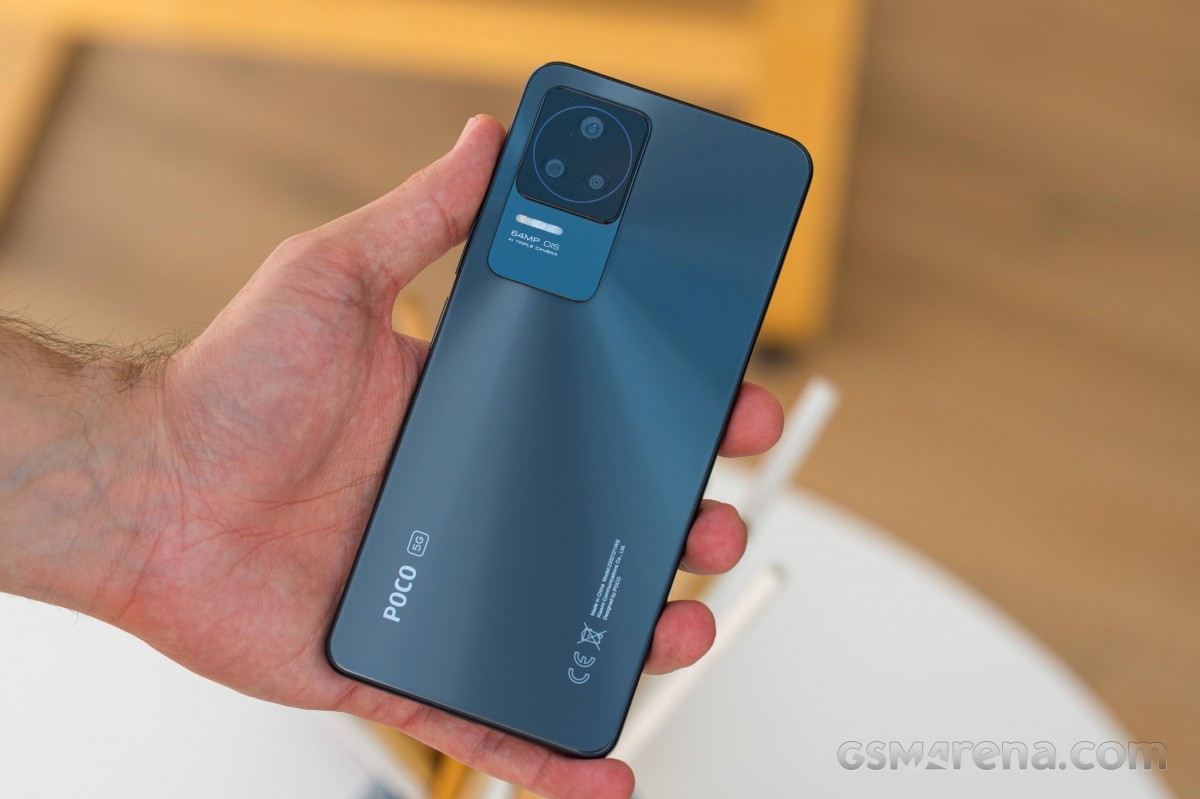 Anyway, the rest of the phone's back is empty aside from the prominent, but not too much, as we've definitely seen worse, Poco logo that's joined by a 5G one that can't become redundant too soon. The glass feels like glass, is as slippery as you'd expect, and that's about all we can say here. The phone itself is definitely not among the worst offenders when it comes to slipperiness, as the plastic frame isn't as much as metal ones usually are, and the glass finish also aids with that. It just doesn't help the device stand out in any way.

It is, dare we say it, incredibly boring looking. That's not necessarily a bad thing, mind you - a lot of people might in fact prefer that. Plus, if you're going to slap a case on it anyway, then the most important thing is the case's design, as that's what you'll really be showcasing all day long.

That brings us neatly to the subject of the bundled case. We appreciate the fact that there is one to begin with, especially as there usually are only a few quality third-party options for brands that aren't Apple or Samsung or Google. The case itself, while not the sturdiest feeling we've ever encountered in a smartphone box, also isn't as cheap feeling and flimsy as the one that ships with the Poco F4 GT, for example. It's a very middle-of-the-road thing that still does manage to offer some level of protection - we dropped the F4 once from about 80cm on a tiled floor, and it survived unscathed. 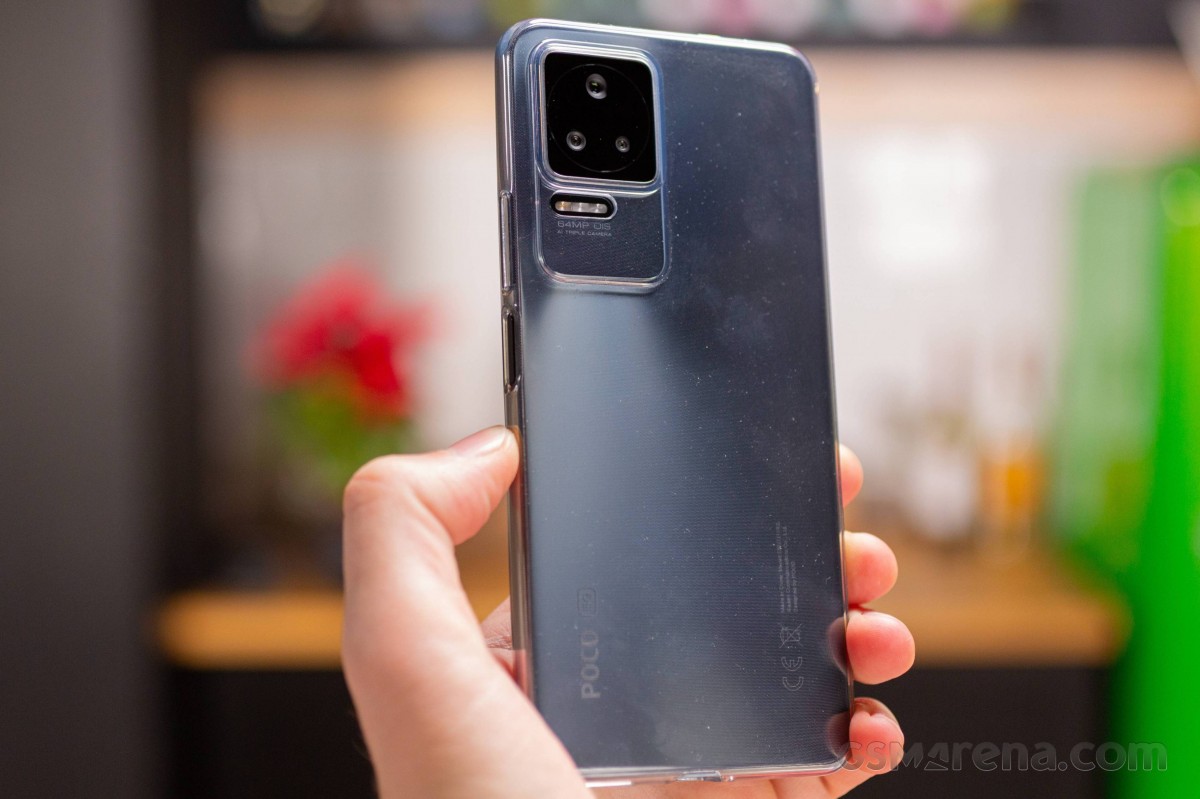 The case has an interesting way of dealing with the two-step camera cutout by basically bulging at the first step and only having an actual cutout around the LED flash array. This means that, if you're right-handed, while you hold the phone your index finger will constantly run into this protrusion, for better or worse. Its ridge can be used as a place to rest your finger against, so that would be the "for better" side, while on the other hand, it's a constant thing you're hitting in day-to-day use. That might not be great for a lot of people, but there's no way around it, really given the design of that island.

Handling is great if you have hands on the larger side, okay if mid-sized, and as bad as any mainstream smartphone for the past few years if they're small. The Poco F4 has a nice weight to it, that's right in the goldilocks zone in this reviewer's opinion, where it's enough to make it feel substantial, but not as much as to require breaks in usage to rest your hands. 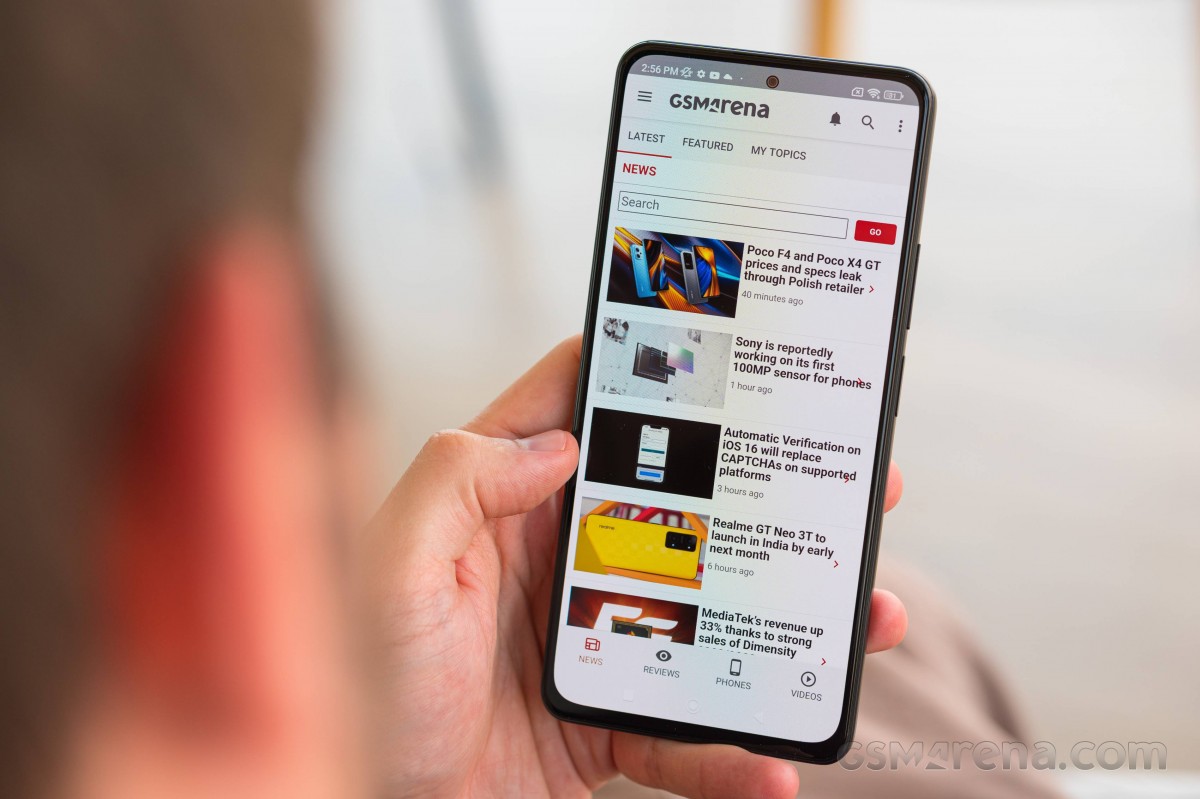 Build quality is outstanding, but as we've already discussed, this definitely doesn't feel as premium as more expensive devices that use metal frames. We're only saying this, so you keep it in mind and don't get disappointed - think of a run-of-the-mill Redmi Note, and the feeling here is quite similar (which is no accident since this was initially launched in China as the Redmi K40s, though with a lesser camera. Xiaomi / Redmi / Poco naming and rebranding shenanigans are still ongoing.

The Poco F4 has a side-mounted fingerprint sensor that lives inside its power button, and it's among the best we've ever used, although not quite the best. Unlocking accuracy on the first try was around 95%, which is very good, but the Poco F4 GT's sensor that we've recently reviewed long-term fared much better with practically 100% accuracy on the first try. Comparatively, this may seem bad, but the Poco F4's sensor is perfectly adequate and similar to most side-mounted ones - it's just that the F4 GT's was an outlier in how good it was. 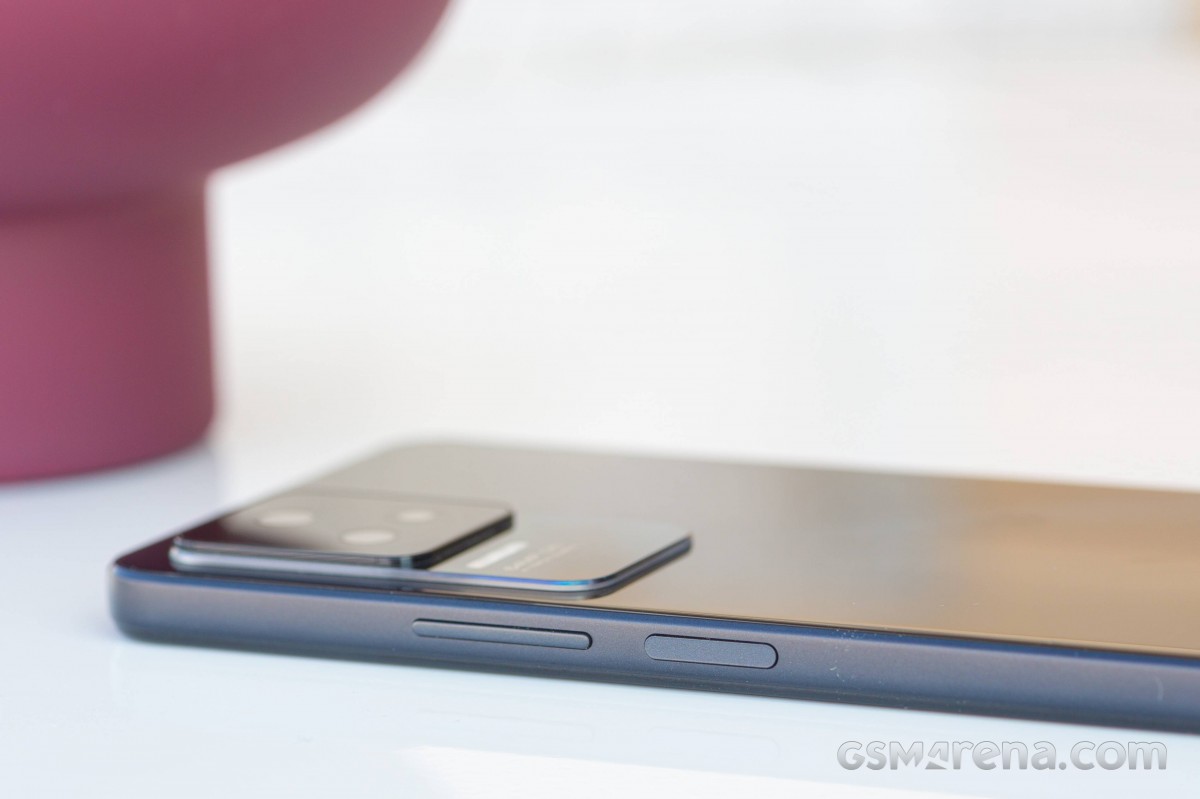 As usual, there's an option to either scan your fingerprint upon touching the key or pressing it, and we always go for the latter as it ensures no accidental unlocks while simply handling the phone. It also makes sense to press the power button to unlock the screen - and this is a two-for-one deal where that does happen, yes, but in a very secure fashion.

There's face unlocking too, and it doesn't work when your eyes are closed (we checked), but with the fingerprint sensor being this good, we're not sure why you'd want to use it, especially since it's less secure. Perhaps if you only unlock using double tapping the screen? Then face unlocking is faster, of course, but if you use the power button mainly - like we do - it's very redundant.

The Poco F4's speakers are perfectly adequate for the job, and we're happy that there's two of them. No matter how good a single down-firing speaker is, it can't touch a dual setup. As usual for Xiaomi and Poco phones of late, the top speaker has two outlets - the earpiece and an additional slit in the top side of the frame. This means that when you're talking on the phone, some of your call's audio will leak out into your surroundings; it's just an inevitable consequence of how it's set up. On the plus side, you do get fuller sound from that speaker than you would have if its only outlet was the earpiece. 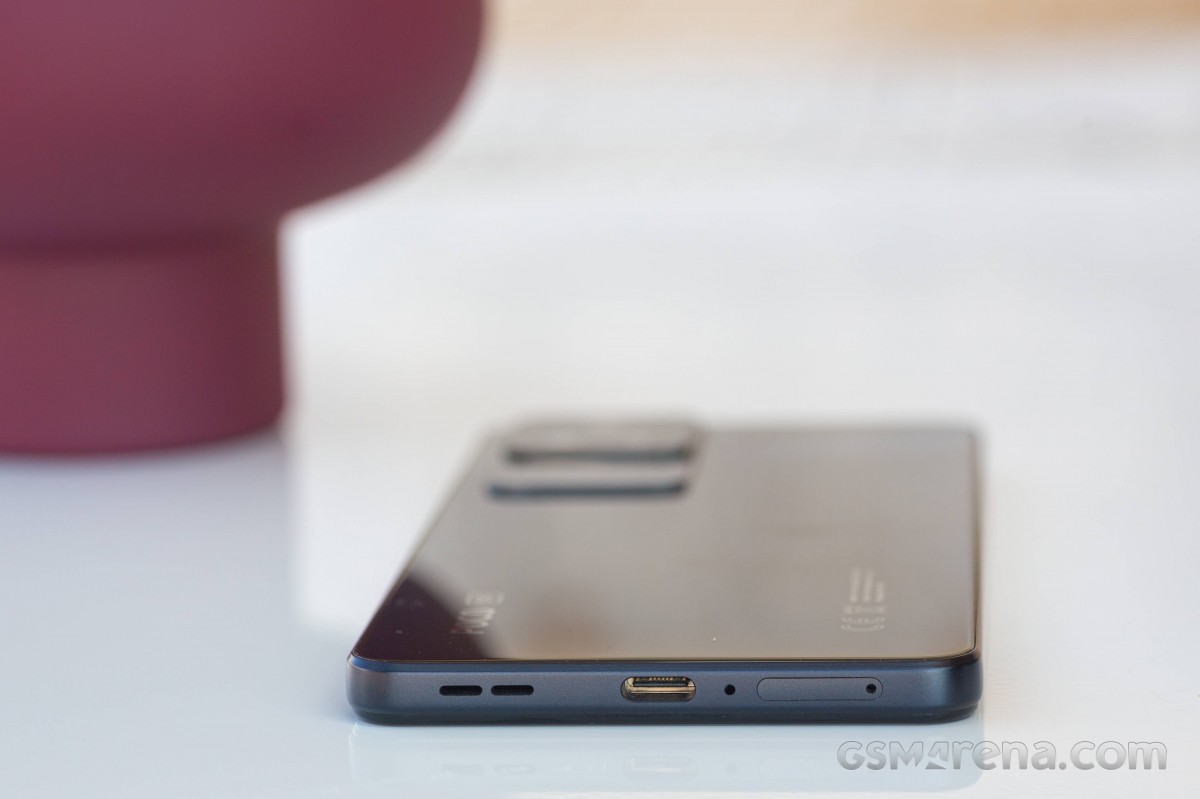 The speakers aren't the best quality ones out there, but they do sound very good, and there's also plenty of volume to comfortably consume media in silent or not very loud environments. In loud areas, you will have to bring the phone closer to your ears to hear what's going on, but that's a limitation all phone speakers currently have. While these weren't the loudest we've heard, they weren't far off and overall, they're very good and unlikely to disappoint, even if they don't stand out in any particular way.

The Poco F4's vibration motor is fine, but not much more than that. This might be one of those areas where some cash was saved, as it feels like it completely lacks any depth - whereas the best ones feel "3D", for lack of a better description, this one's clearly in the "2D" camp. Like all modern ones, it's also of the 'feel it more than hear it' variety, which is okay for the more "3D" ones, but in this case, because of that lack of depth, there's not much oomph in it at all. So even inside your pocket, if it engages when you're on a busy street with a lot of noise and vibrations of its own, you might actually miss the notification or call or whatever else it could be.

So we'd call this passable for the price, but Xiaomi and its sub-brands are definitely capable of doing better - see, for example, the recently reviewed long-term Poco F4 GT, which offers a very different experience. Anyway, unless you've had some experience with the best of the best, this vibration motor isn't likely to feel very bad - it's not like those in the cheapest phones used to be a few years ago. It's just not on par with the best out there, so you should definitely tune your expectations accordingly.

I have the Poco F4 I bought it a month ago after my OnePlus 7 pro died. The poco is amazing a truly amazing phone I don't know why they keep comparing it to Poco F3

Try poco launcher with meeyo theme and you'll thank me