The Poco X4 Pro 5G is easily distinguishable from the Redmi Note 11 Pro 5G because of its uniquely designed rear panel, the camera island specifically. We do appreciate the shrunken Poco logo - it was quite large on the Poco X3 series. 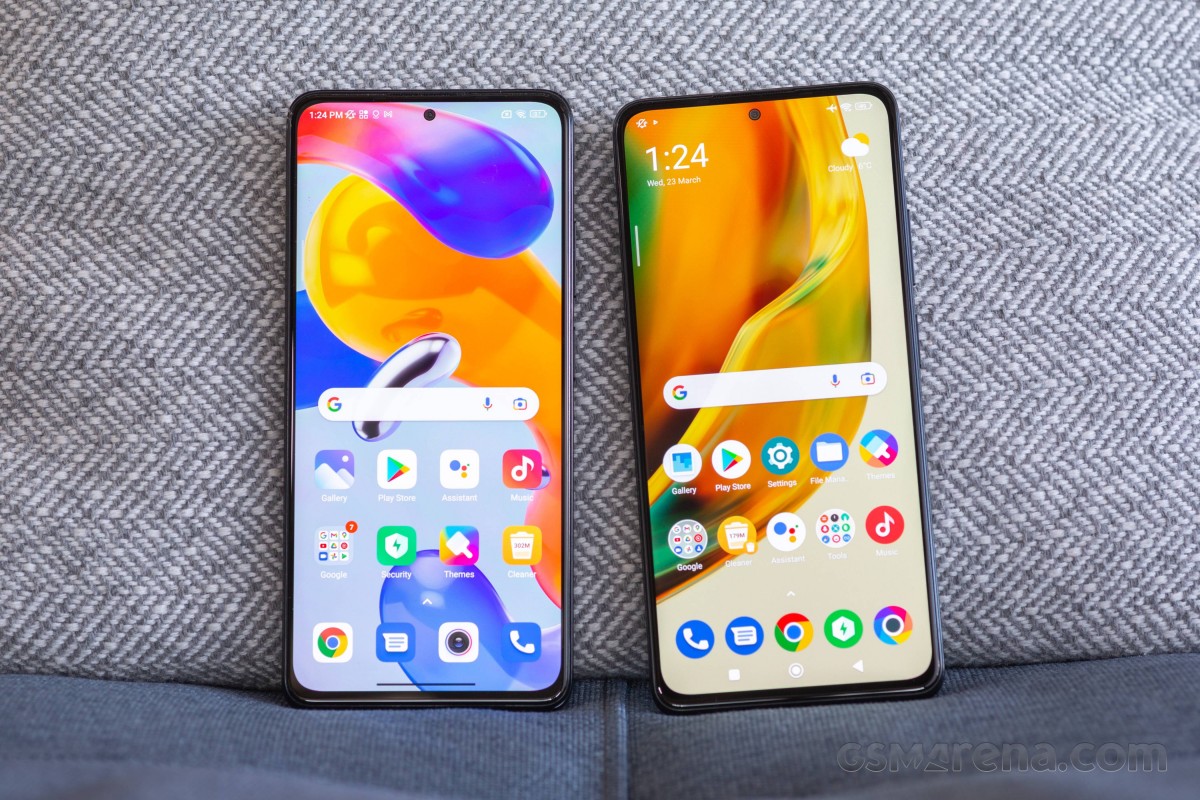 The Poco X4 Pro borrows its shape from the Redmi Note 11 phones - it has a flat glass front, a flat glass back, and a grippy plastic frame with a matte finish. Gorilla Glass 5 handles the screen protection, but we have no information on the maker/brand of the rear glass.

The Poco X4 Pro is IP53-rated for dust and splash protection, which is appreciated, and we could see rubber insulation across important parts. Of course, these are both basic resistances - meaning the phone is neither dust-, nor water-tight and should not be submerged into anything. It should do fine in light rain, and that's about it. 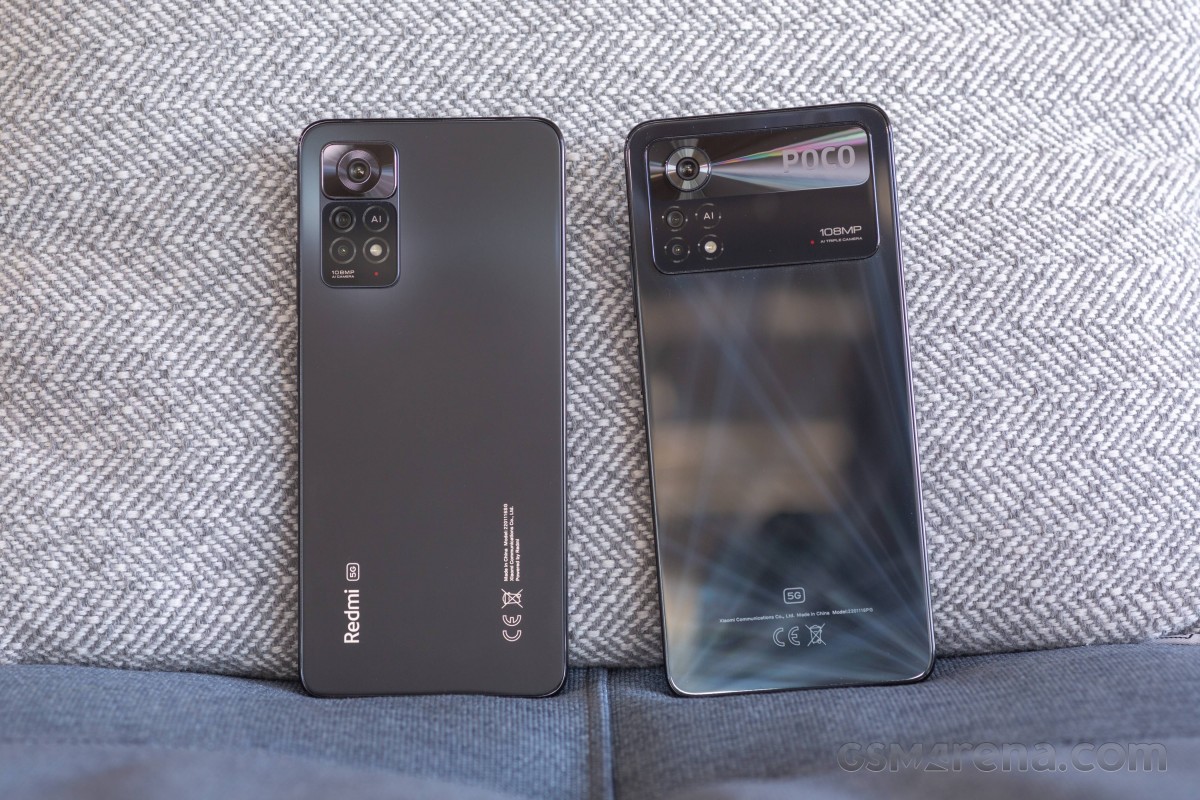 We have the Laser Black version, which is incredibly good-looking for its simplicity. Of course, this is Poco, and you will get a unique effect on the back, however subtle, once some light comes into play, and its reflection begins shooting various laser-like rays across the back panel.

You can also get the Poco X4 Pro in Laster Blue and Poco Yellow. Both variants look like solid colors with glossy finish, but when they reflect light, the reflection also mimics lasers.

And with all the said, let's inspect the Poco X4 Pro up close.

The 6.67-inch display size has become like the gold standard for the Redmi Note Pro models. So, it's not surprising the Poco X4 Pro utilizes the same 6.67" Super AMOLED screen as the Redmi Note 11 Pro, Redmi Note 11 Pro 5G, and probably whatever Redmi Note Pro Xiaomi launches this year. But we don't mean that as criticism, on the contrary - this OLED panel has turned out to be incredibly good so far, and the Poco X4 Pro screen also appears to be of the same high quality. 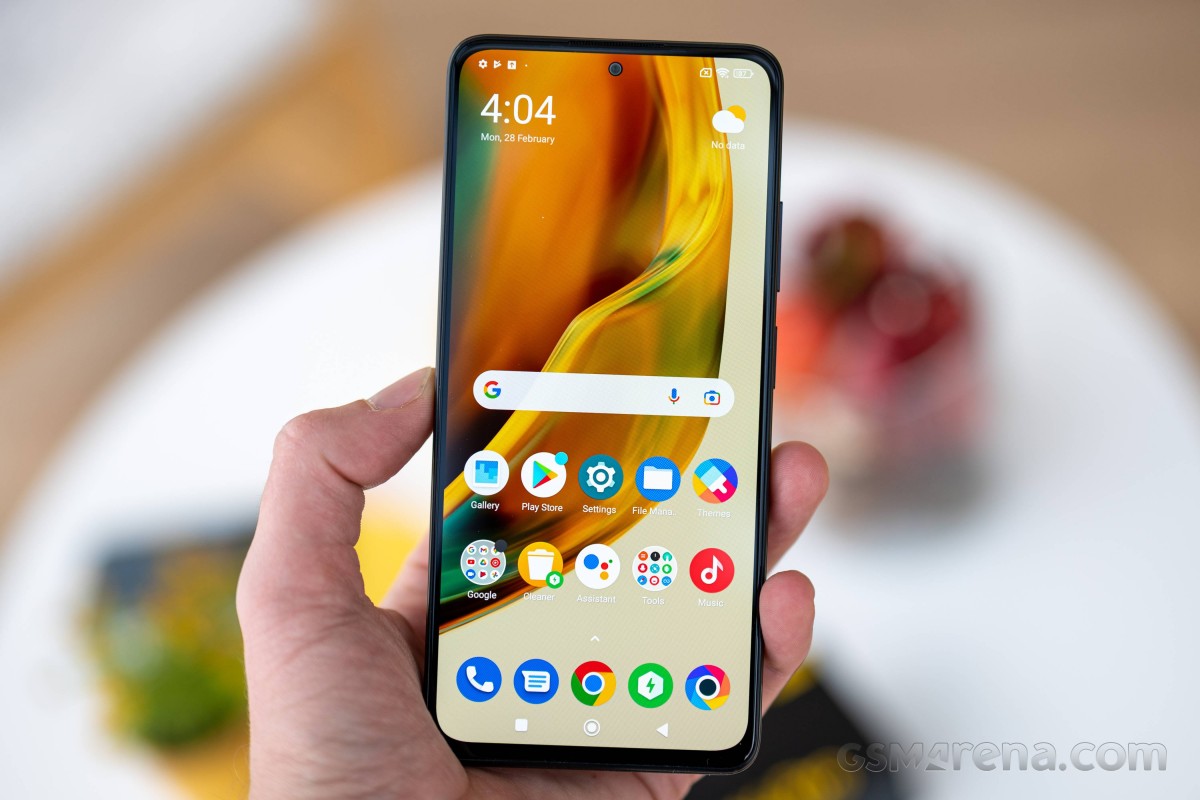 The panel has small perforation centered around the top - this is where you'd find the 16MP selfie camera.

And above the screen, hidden within the thin top bezels, is this thin grille, which hides the earpiece. 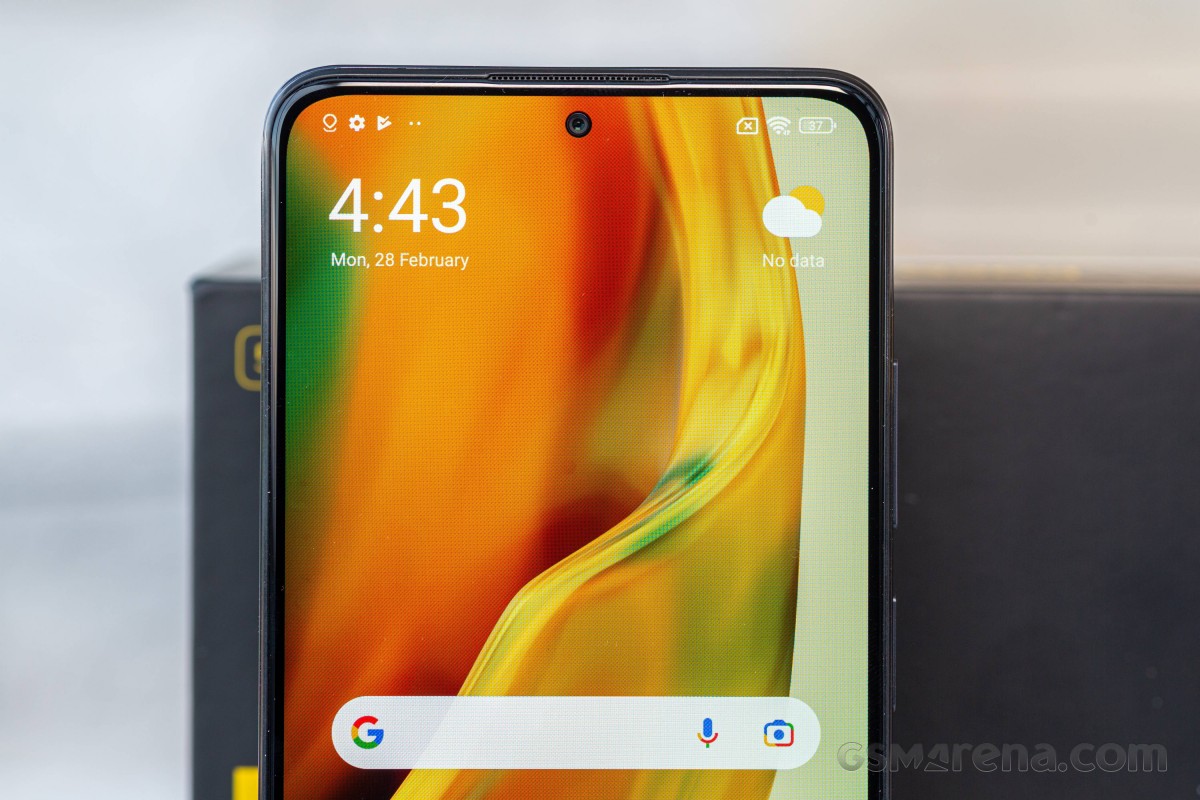 Well, the Poco X4 Pro does come with stereo speakers, and you'd find two dotted grilles on its top and bottom sides. But since the top speaker also doubles as an earpiece, you obviously get three sound outlets when you count the front one. 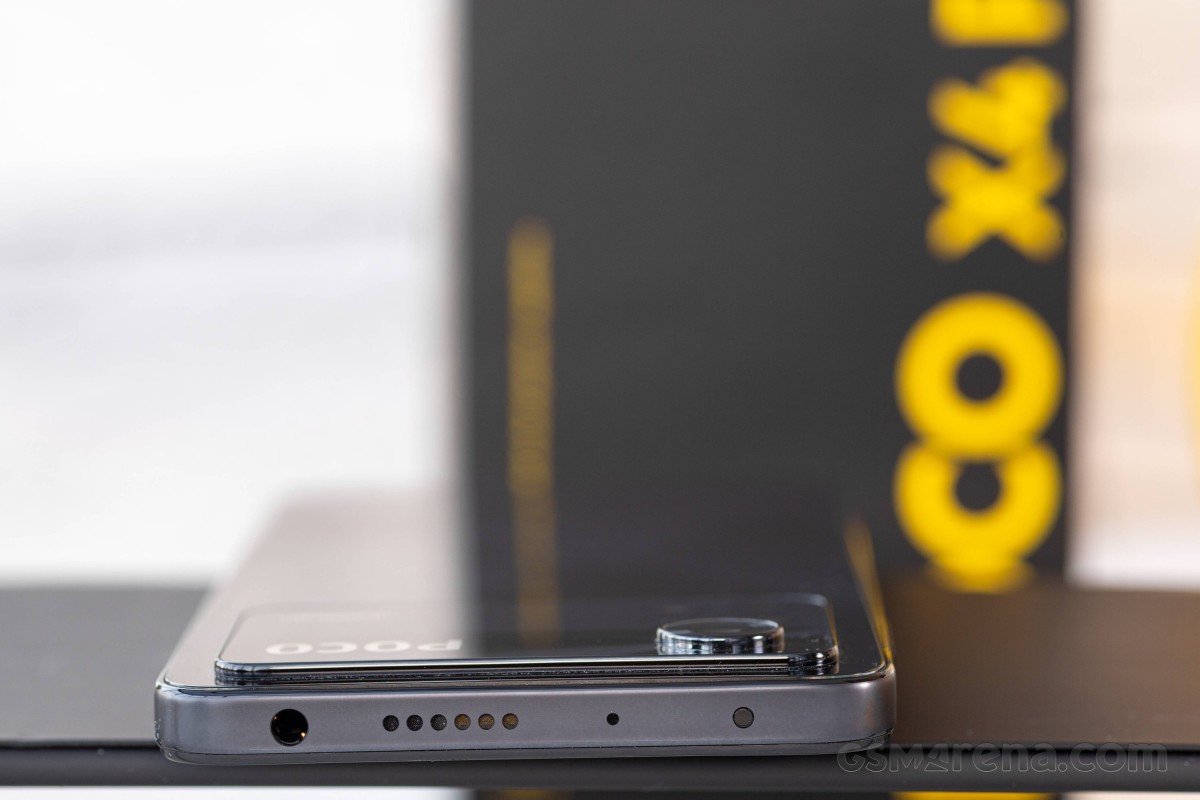 Good news - the output is somewhat directional, and when you are in a call - the voice is coming mostly from the front part. When playing music though, the audio is coming from all three spots.

And while we are talking about the sides, the top also houses the 3.5mm jack, the IR blaster, and a microphone. 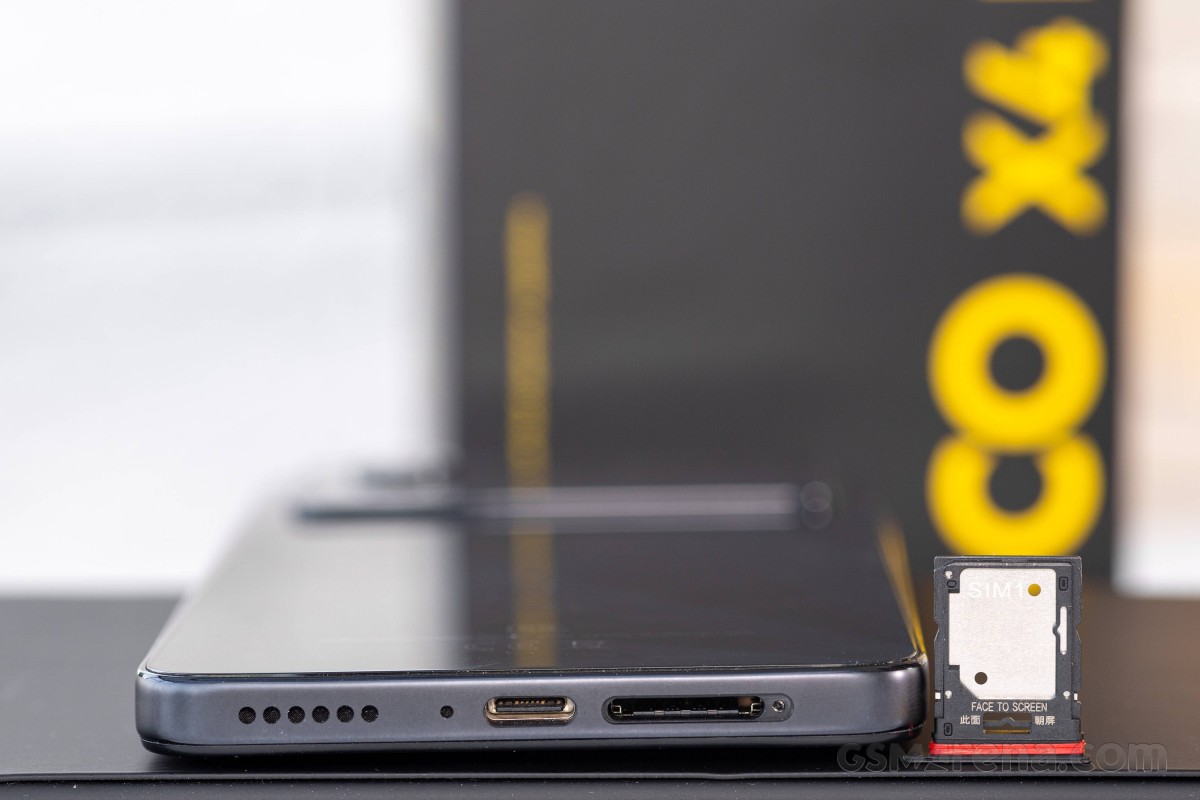 Meanwhile, the bottom of the Poco X4 Pro contains the USB-C port, the primary microphone, and the hybrid SIM/microSD tray, together with the second speaker. The ejectable card tray has noticeably good rubber insulation. 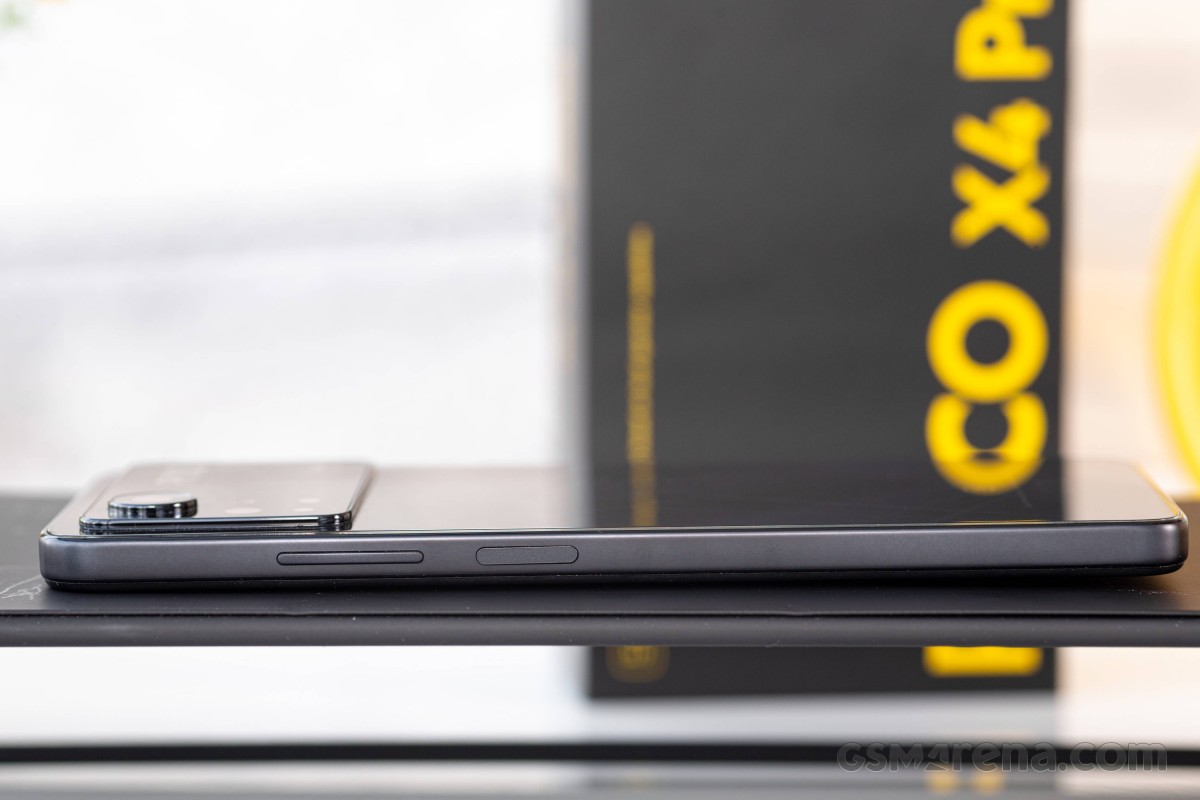 The left side has no controls. The volume and the power/lock keys are on the right.

The power key's surface incorporates the fingerprint scanner - it's always-on and blazing-fast. The accuracy is superb, too. You can set its trigger action to be either a touch or a press. 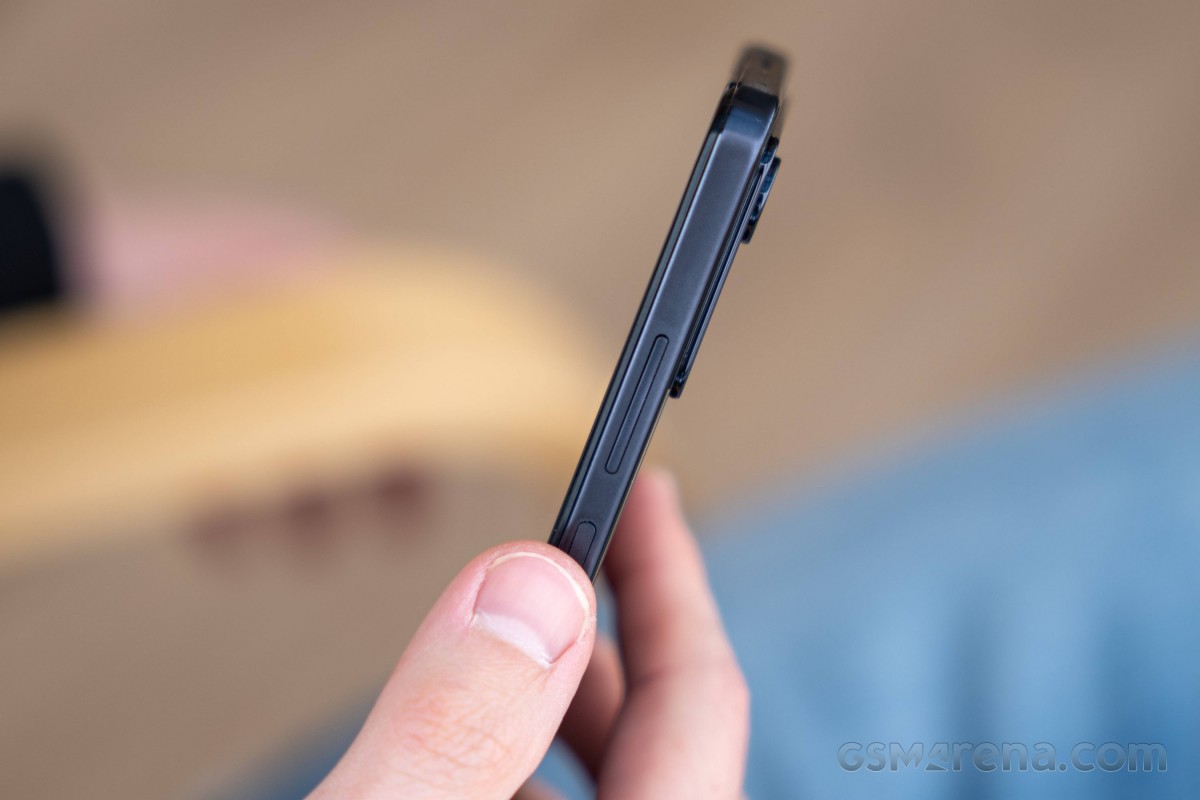 The flat frame is made of thick plastic, has a matching color to the back, but comes with a matte finish that helps for an okay grip.

The back is quite shiny, but in a good way. It contains a massive jutting-out camera island with the 108MP primary surrounded by a thick ring, as well as the flush 8MP ultrawide and 2MP macro cameras. A single LED flash is also around. 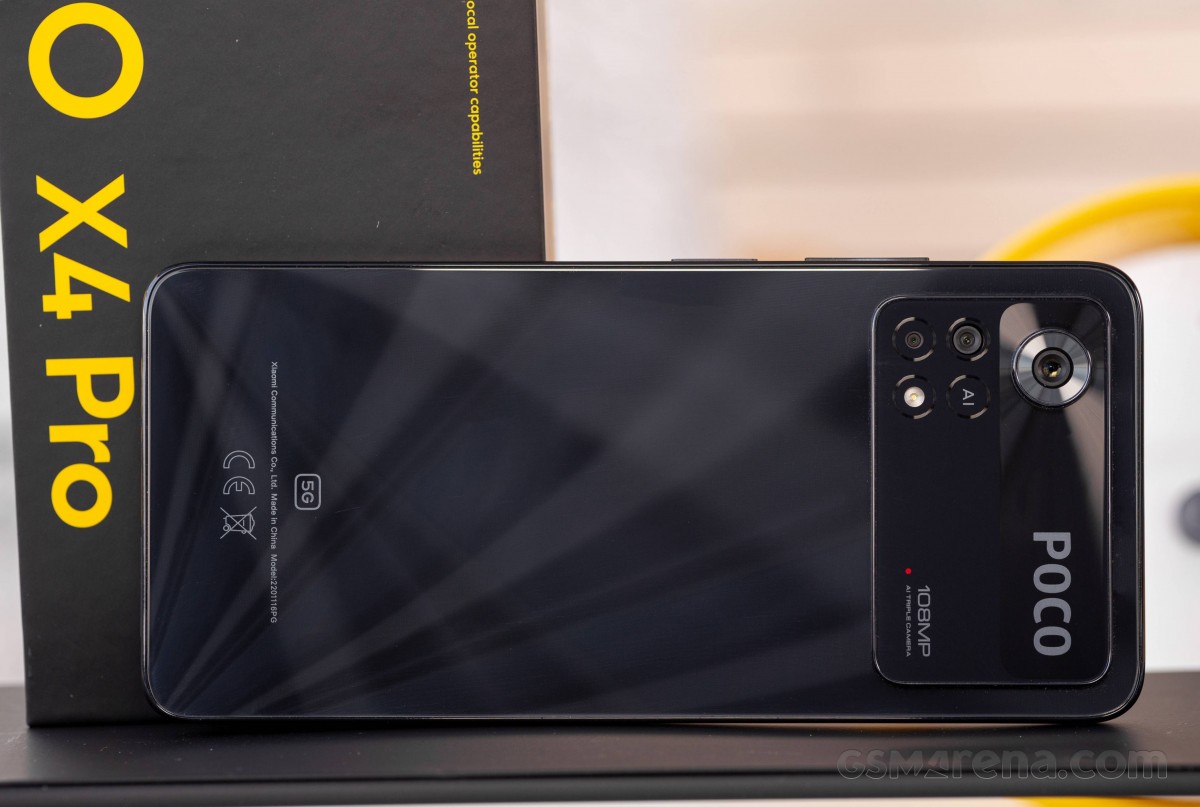 The camera glass is gigantic, but we like it better than on the Redmi Note 11 Pro. Thanks to this shape - the Poco X4 Pro does not wobble when used on a desk, and its rear panel is less prone to scratches.

And, if you look really carefully, you may find that the camera glass actually has two different shades that make for two subtle strips - one holds the primary camera together with the Poco logo, and the bottom one has everything else. 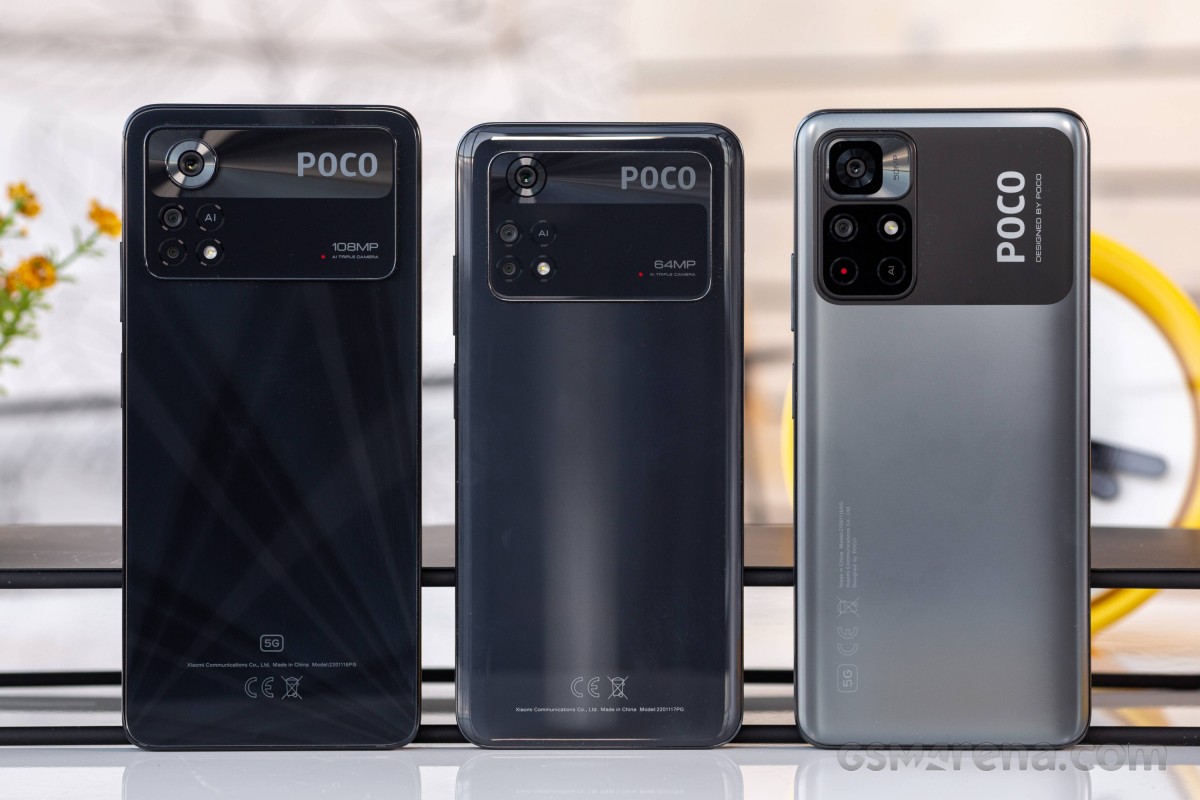 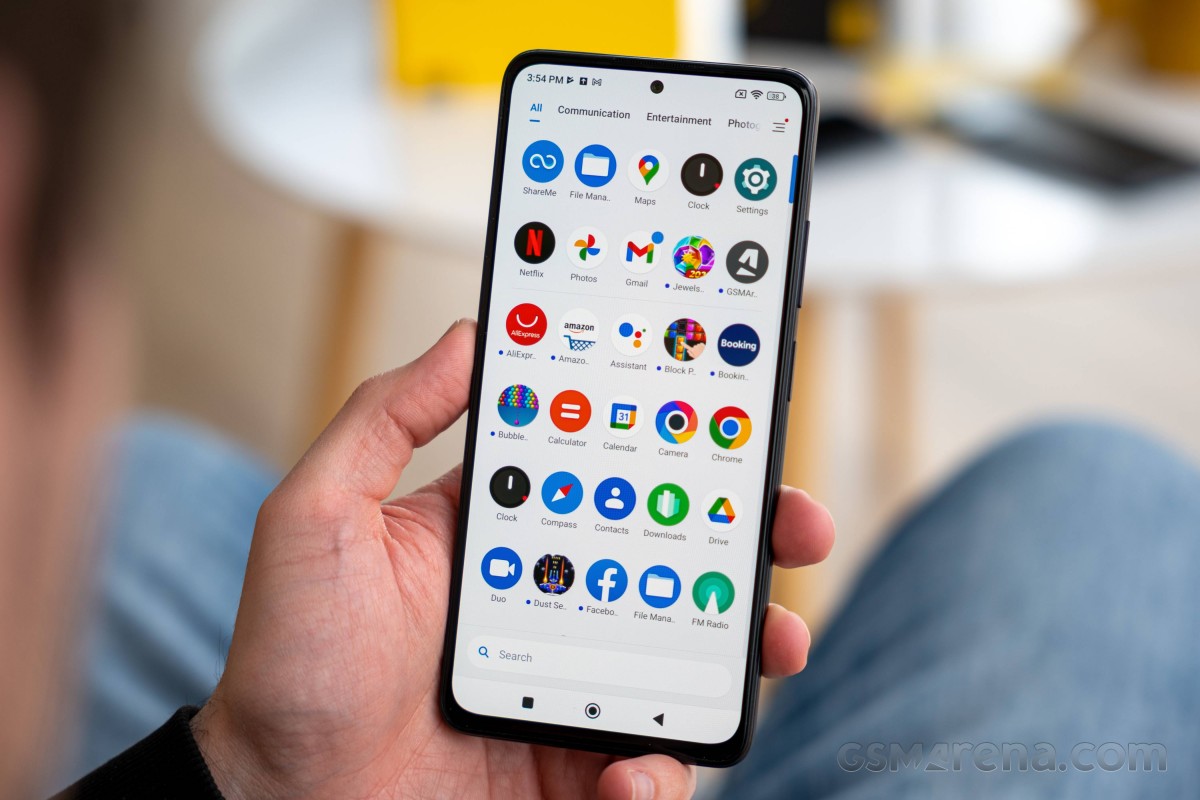 We enjoyed how the Poco X4 Pro 5G handles. It's a phone of a solid build, with secure enough grip thanks to its frame and a cool yet stylish rear panel that keeps its good looks even when it's smudged with fingerprints all over. The basic splash resistance is also a peace of mind we like to have with the more affordable smartphones.

Indeed, we liked the Poco X4 Pro, and we think most people will be happy with its shape, size and design.

That's unfortunate. With the 778G it would have been a proper killer. I suspect it would encroach on the Mii 11 Lite then tho.

thank you so much, you helped me make a great decision,, i almost went with 695,, i was dying for 1200 , again thank you for your comment

Actually the REAL Poco X4 Pro was supposed to get the Snapdragon 778G instead. If you saw the phones most of them have the lower tier 6XX or the Dimensity 8XX series. And people then complaints why those trash are the same.