Realme may announce the Narzo 30 series next week, but one store in particular didn’t feel like waiting and put up a poster on its window, revealing some key specs. Note that the Pro model is joined by the 30A, but the vanilla Narzo 30 is not mentioned at all.

The Realme Narzo 30 Pro 5G will be the first Narzo phone to sport 5G. This is courtesy of the MediaTek Dimensity 800U chipset. Its Mali-G57 MC3 GPU will be pushing graphics to the phone’s 120 Hz display. 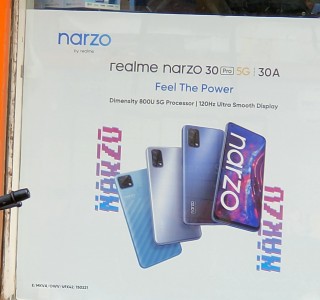 These specs line up with with the Realme Q2, also known as Realme 7 5G in the West. Of course, neither version is available in India yet. The Realme X7, which arrived in India last week, uses the same chipset but has a 60 Hz AMOLED display.

As for the Realme Narzo 30A, that is the phone at the bottom, the one with the wavy texture. The square camera bump with an LED flash in the bottom right corner is a common design element on Realme phones. You can see it on the Narzo 20, aka Realme 7i. Also note the rear-mounted fingerprint reader.

This phone has great specs. The camera, big battery and Dimensity chipset are all pretty good

It's all about preferences. If you want smoothness then u go lcd. If u prefer amoleds, like me for the colour accuracy and brightness and deep blacks, then go for a 60hz one. If you want both then you raise your budget and get a flagship. The op...