Simply put, Project Treble’s purpose is to separate the core of Android OS from the OEM’s modifications to address the wild issue of firmware fragmentation that has plagues Android devices since the platform’s initial existence but is best exemplified by Samsung taking very times to update its flagship phones with major updates.

Thanks to Project Treble, Samsung should be able to push quicker updates for major Android. In addition, a tester at XDA-Developers was able to get a Project Treble Generic System Image running on the Galaxy S9. The Exynos version of the phone was able to boot up with Android 8.0 AOSP and according to the post, Wi-Fi, Bluetooth, NFC, fingerprint, camera and mobile data all work properly. This progress is much more significant in comparison to the AOSP rom that’s available for the Galaxy S8. 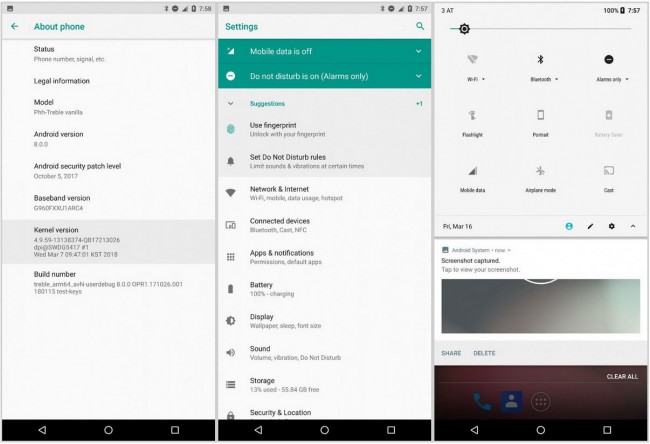 What didn’t work is the Iris scanner, which is likely due to the fact that vanilla-Android does not support such a biometric sensor – at least not at this point in time. Someone might be able to extract the framework needed for the Iris scanner to work and adapt it to AOSP Android. It’s much easier said than done.

Currently, this will only work on an Exynos version of the phone since there is yet to be a way to unlock the bootloader on a Snapdragon version of the Galaxy S9. Aside from that, the actual process to prepare the phone for this Generic System Image is still cumbersome, though it can could certainly be streamlined for future builds of LineageOS or CarbonROM, two popular AOSP ROMs in the aftermarket development communities.

Check out the Source link to read more about the progress of AOSP on the Galaxy S9 – if you’re into that sort of thing.

My s8, Note8, and s9 runs perfectly with Samsung Experience 9.0. No bugs or anything. Samsung software is quick and great, no need for a vanilla rom

Yep now Samsung will take 11 months to make their skin instead of 12 months .. great news for Sam lovers

Best answer I got, thanks for the insight. Unfortunately not many old phones are easy to update by third party developers nowadays. I tried to search for my old exynos note 4 and it has only a very experimental nougat rom, with very nasty bugs...