Qualcomm made a bunch of announcements in Shanghai today. Along with the 14nm Snapdragon 450 chipset and the underscreen fingerprint technology, it also unveiled the Snapdragon Wear 1200 chipset. It will be featured in low-end wearables and single-purpose IoT devices like parking meters and pumping stations. 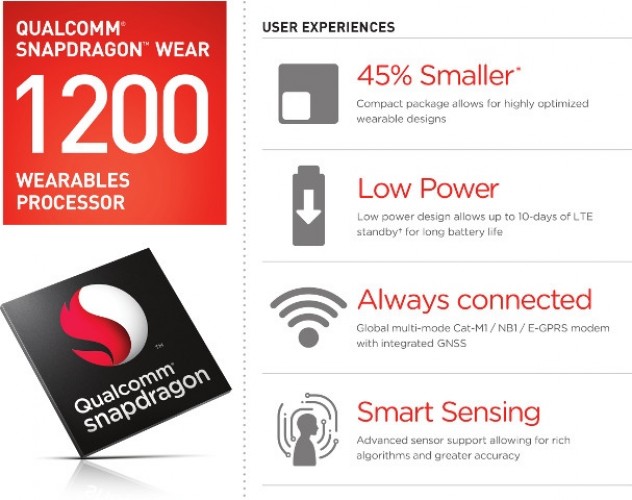 The Snapdragon Wear 1200 evolved from the Wear 1100. It is almost half the size while adding support for LTE Cat M1 and NB1 technologies that allow ultra-low-power electronics to connect to an LTE network with minimal power consumption. The categories max out at data speed between 10 and 50 Kbps, making the data consumption also insignificant.

Wear 1200 supports multiple tracking, including GLONASS and Galileo. Some devices might even have Bluetooth, Wi-Fi and Qualcomm’s rapid charging technology.

The SoC probably would not reach an Android device, but surely we’ll see it in basic fitness trackers. It will be used by IoT devices manufacturers because of its size and enhanced connectivity. The chipset is already available for shipping.

Qualcomm is going with TSMC for 7nm Snapdragons, not Samsung