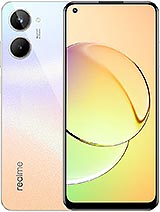 in Italy it seems to have NFC

They made a phone without NFC in 2022. Shame

Meow, 11 Nov 2022Great and is among the best mid range phone!Yeah, indeed is great, can't complain about it....I mean just look at the immense downgrades from the 9 and 8 series...i dont even know with which one to start, I mean Im speechless, this is real "evolution". Such a great phone

Do is have gyro eis for video recording ???

Meow, 11 Nov 2022Great and is among the best mid range phone!in your dreams

Chaibens, 13 Nov 2022Wow !! Thnx man for the advice, I almost changed it with Sa... moreyou are downgrading so much stuff if you do.

Realme's phones were good af back in 2019-2021 but now they just sell phones with budget specs, the realme 9 was still good until this came out ,like, I'd rather buy the realme 6, 7 and 8 literally still the best phones you can buy

why realme , OPPO , oneplus has lower chin ? its so awful !
dont like the lower chin design at all.

Selfish Realme, even a simple EIS in video has removed in all cams why such selfishness ????👎❌, Realme 8 do more better for same price, unacceptable vonlontaty downgrading and conserving same price as it's predecessor fooling customers, go to the hell realme.

Meow, 11 Nov 2022Great and is among the best mid range phone!yup, great in being the worst.

One of the greatest potatoes to ever hit the "Mid-Range" segment.