Oppo made quite a splash on the mobile scene with the original Realme 1, mainly for its extremely budget price tag. Now, just a few months later, it is already clear that the Chinese OEM intends to ride the PR wave and release a Realme 2 successor, of sorts. The handset will launch as a Flipkart exclusive on August 28 and some specs have already been confirmed by Oppo: Snapdragon SoC, 6.2-inch display and a 88.8% screen-to-body ratio, a notch and a large 4,230 mAh battery. 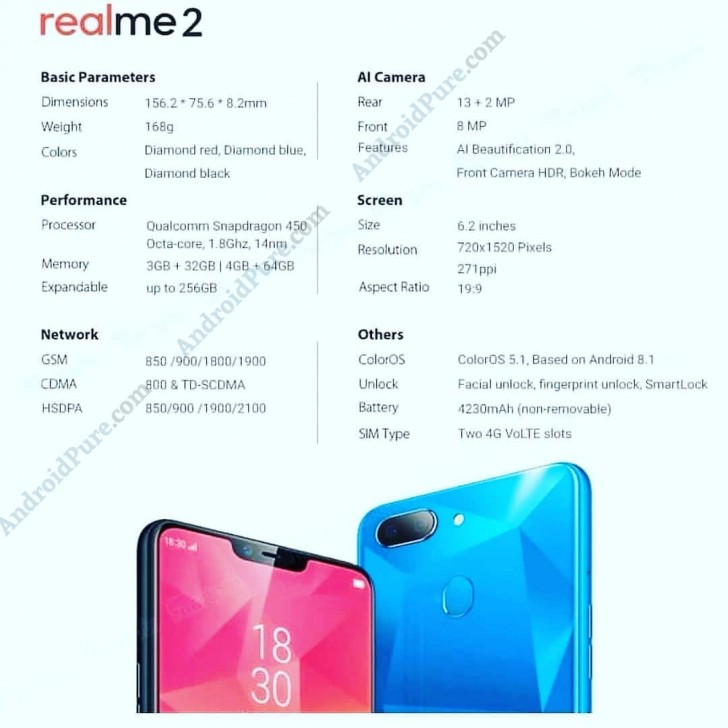 Today brings a fresh new leak, in the form of a full specs sheet for the device. We can't vouch for its authenticity, but it does confirm all the aforementioned specs. Expanding on those, we learn that the display will sport an HD+ resolution of 720x1520 pixels and the chipset will, indeed, be the Snapdragon 450, like other Oppo rumors have previously suggested. Memory configurations include 3GB of RAM, plus 32GB of storage or 4GB, Plus 64GB, both expandable via microSD. Going by these details alone, the Realme 2 does appear to be somewhat of a downgrade, compared to its predecessor. At the very least, it is going to be a very different device.

#Realme2 with @qualcomm_in Snapdragon processor is designed to provide you #ANotchAbove experience with spectacular performance, ultrafast speed, astonishing graphics, and a long lasting battery.
Like if you’re as excited for the launch as we are. pic.twitter.com/33a6LrOv52

Other noteworthy highlights from the specs sheet include measurements - 156.2 x 75.6 x 8.2mm and a weight of 168 grams - quite decent, considering the hefty 4,320 mAh battery. Color options are also listed. The Realme 2 will also, apparently, support 4G speeds and VoLTE on both of its SIM slots. Software-wise, it is said to run on Oppo's ColorOS 5.1 (Android 8.1), complete with some advanced authentication features, like Face unlock and SmartLock, to go along with the fingerprint reader.

The new #Realme2 comes with an amazing notch screen of 88.8% screen-to-body ratio. Be ready for #ANotchAbove experience. Tell us the first thing that you’ll do once you get a Notch Screen? pic.twitter.com/K87AhgPlqV

Frankly, this looks almost identical to the recently launched Oppo A5. All things considered, the Realme 2 offers a handful of upgrades over its predecessor in exchange for a modest price bump - the Realme 1's launch price was INR 8,990 ($128).

Oppo AX5 leaks in hands-on photos, looks a lot like the Realme 2

already its said to b in 10k starting price