Realme is expected to announce its 64MP quad camera smartphone soon. The company has scheduled an event in India on August 8 where it will showcase its camera, but we are unlikely to get more details about the phones until later.

Many are assuming this 64MP quad camera smartphone will be called the Realme 4, but that's unlikely to happen as Chinese smartphone brands skip the number four because it's considered unlucky in their home country.

Well, adding further credence to that speculation, Realme India CEO Madhav Sheth has indirectly confirmed that the company will indeed skip the number four for its upcoming smartphone.

Sheth has changed his Twitter handle to Madhav '5' Quad, confirming that the upcoming smartphone will be called Realme 5 and will come with a quad camera setup. 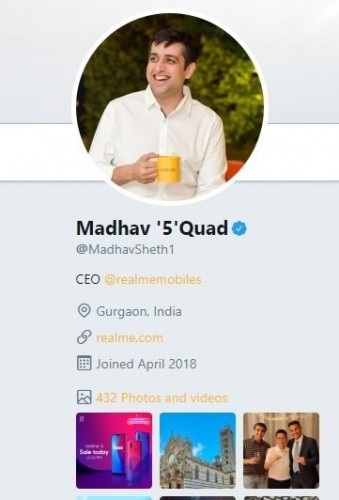 This isn't the first time Sheth has promoted a Realme smartphone on Twitter by changing his Twitter name. The Indian CEO had previously changed his name to "Madhav X" to promote the Realme X in India.

Coming back to the 64MP quad camera smartphone, Realme hasn't announced its launch date yet but we know that it will make its debut in India before it expands to other markets.

Realme 3i unveiled with Helio P60, 4,230 mAh battery and diamond-cut back

LOLs. Instead of making innovation, phone makers have gone back to doing the more the better mantra. Not much different from the screen pixels or camera megapixels war just 5 years ago.

Or call it "Bug eyed monster"