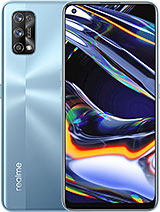 Anonymous, 08 Sep 2020What i need is now to combine this and poco x3 So i have 5... moreMi Note 10 Lite is the closest phone with those specs you mentioned with the exception of 65W charging and expandable memory. 5000 mah battery? Check. 60Hz AMOLED? Check. IMX686? Check. SD732G? Check because the SD730G in the Mi Note 10 Lite is almost identical.

Its 30W charging is not too bad being able to fill that 5260 mah battery in only 1 hour 20 minutes time. It doesn't have expandable memory, but you can now get a 8/128 Mi Note 10 Lite for less money than the Realme 7 Pro.

do these have notification lights, radio, or NFC functio, autocall recording as well as expandable memory?

Realme should have to change camera and add telly photo lense

confuse, 06 Sep 2020realme 7 pro doesnt have 90hz you must be kidding.realme 7 ... morethey trade it for super amoled scree which is nice and better speaker,camera and battery life with its 65watts

It is high time for Realme to reduce and phaseout its commitment to the legacy 4G markets.

hahaaha, i doubt you used a 5G network. i have and its not as great as your think. i can tell that you that 4G will still be relevant for at least 5 years more. even then only if 5g becomes widely available which at least takes 3 more years from now.

4G is better than 5G in terms of everything but the speed and 5g speed is not worth the trade off.

pro version feels like an actual downgrade compared to the standard realme 7...wat

Wished they put the sided finger print in the pro too

What the hell realme is doing, realme 6 pro had gorilla glass 5 protection on front and back while this new model has gorilla glass 3+ plus plastic coating. Downgraded in the sense of build quality.

Aswin1123, 06 Sep 2020I juz dont know for what they all using the sd 720g it is a... moreSD855 (SD855+) is no longer in active production and no longer available at 2019 price. Phone-makers do not have a viable option to use SD855 for their 2020 phones, unless you have a large quantity of leftover SD855(SD855+), which is typically a direct result of much-worse-than-expected sale of your old flagship phones.

Can anybody tell me the sound quality of this phone over headphones because this set has 24 bit chip.

Faker, 06 Sep 2020This is not a Realme but it's Fakeme because they said... moreSD720G is the best new 4G SoC available. (SD732G is not yet available in quantity, and it is not that much an improvement over SD720G.) There is no way forward for 4G phones, because 4G phones are dead in all practical sense. It is time for the smartphone world to move on. Realme will soon reach the decision to take the practical steps to shut down its 4G phone production.