As we've already pointed out, the design has changed a lot coming from the Realme 6 Pro. Gone is the flashy gradient on the back and it's replaced with a two-tone matte finish. It gives the impression of a metal phone from a distance but it's still plastic. And perhaps it's due to the color variant, but this one feels more premium than the vanilla Realme 7 for some odd reason. Both phones feature identical backs so we have to believe it's the color - this one is Mirror Blue while the vanilla 7 we had was in Mist White. 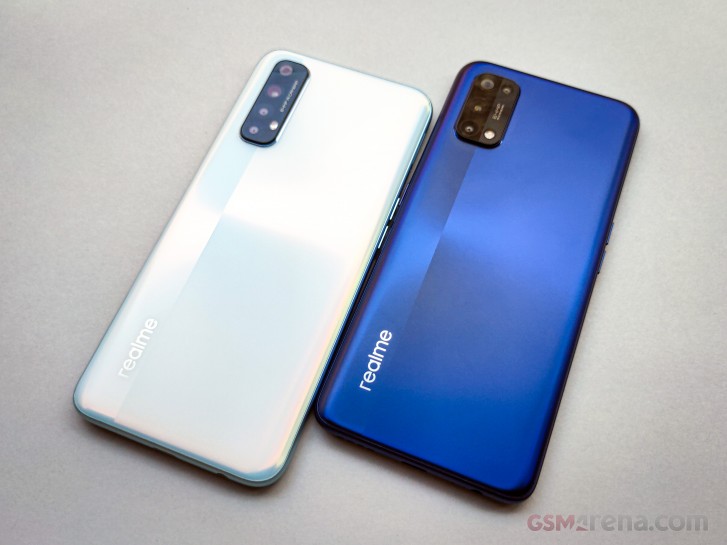 The back panel doesn't just look nice, it also provides a more comfortable and secure grip compared to the 6 Pro. The finish itself doesn't attract fingerprints as much and seems fairly sturdy, so we doubt it will easily pick up scratches. 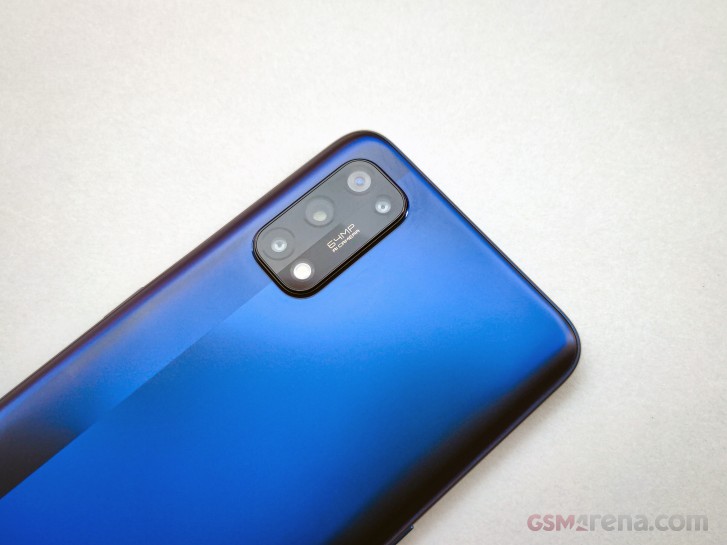 The accented power button is a nice touch while the frame on which it sits is still plastic but the matte finish successfully mimics metal from a distance. 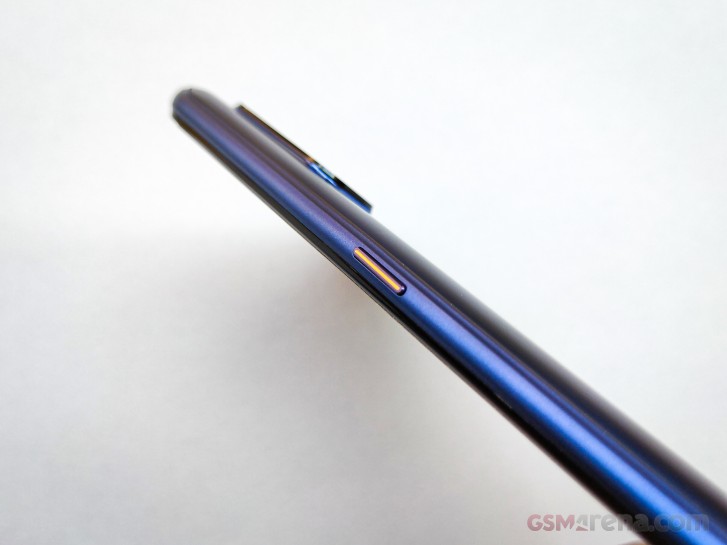 When it comes to ergonomics, the Realme 7 Pro feels like a big improvement over the Realme 6 Pro. The considerably shorter and a bit narrower body and 20g lighter weight make the 7 Pro feel more comfortable to hold and easier to operate with one hand.

The new camera island being shorter frees up some space for your index finger when holding the handset so you won't be smudging the bottom lens as much. 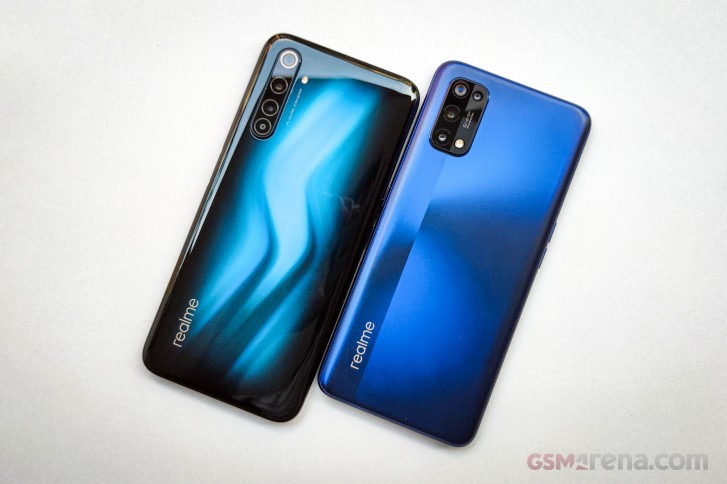 On the front we have some pleasingly thin bezels with the bottom one being somewhat thick. Also, the punch-hole for the front camera is now a lot smaller. The bigger reason is the fact that it houses only one camera, but the fact that it's sitting inside an AMOLED panel also helps, says Realme. The latter allows for less tolerance and finer cutout for the sensor compared to the IPS LCD solution. 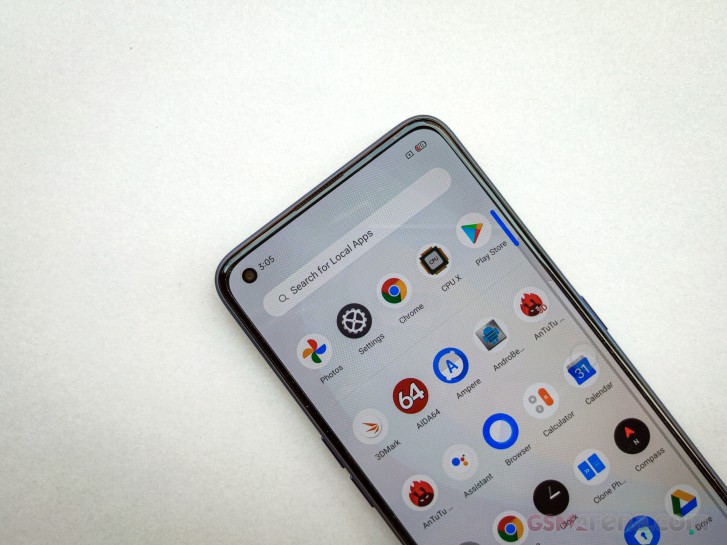 The OLED screen has also allowed Realme to put an under-display fingerprint reader. Our initial impressions aren't great, though. The sensor felt a bit of a hit and miss - fast but would sometimes misread our fingers and refuse to authorize us. 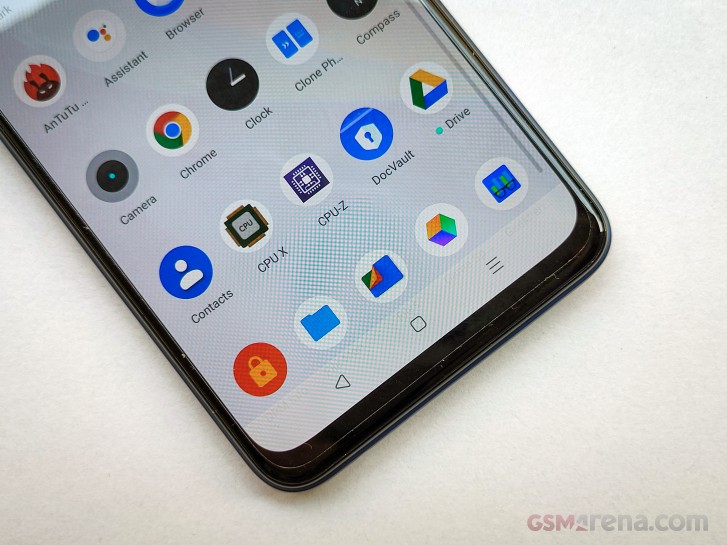 With the chipset remaining unchanged, the biggest change is the new display, which comes with an OLED panel but lower 60Hz refresh rate. The HRR displays are trending lately and everyone is rushing to put them on their phones, so why the move in the opposite direction? 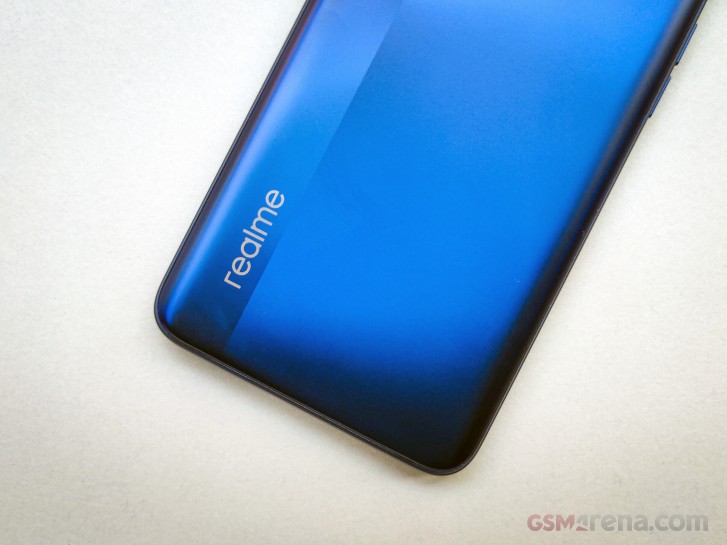 The company has good reasons - its research showed that having an AMOLED panel is more important than having a 90Hz display when the budget can't be stretched to fit in both.

We can definitely see how this is a good point. The difference in image quality between an OLED panel and even one of the best LCD panels is more noticeable than the smooth 90Hz animations, which are lost on a large portion of the users. So for most people the shift from a 90Hz LCD panel to a 60Hz OLED one is definitely an upgrade. Supporting the Widevine L1 standard is a must these days and the 7 Pro is well-equipped. You can enjoy Amazon Prime and Netflix content in Full HD. 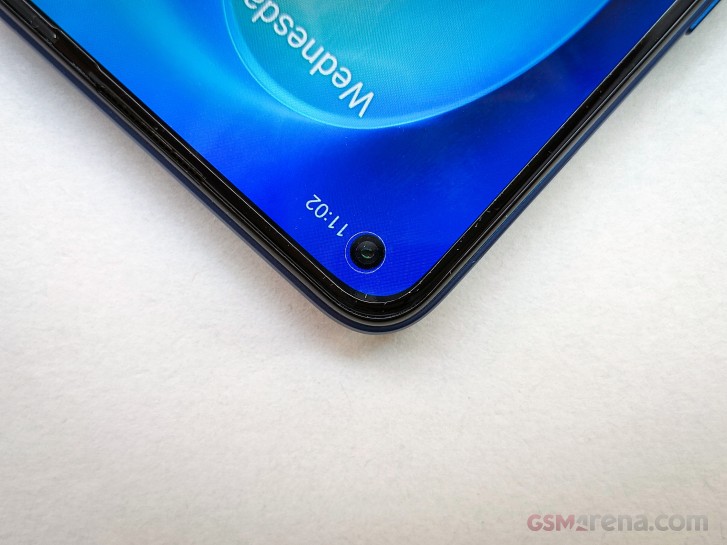 Then there's the matter of size - Realme has reduced the diagonal to 6.4" from 6.6". It certainly benefits handling, though, so depending on how much you like the trend of ever-growing displays you might even consider this an upgrade.

It's a bit harder to maintain the same feeling when it comes to cameras though. Gone is the telephoto shooter, replaced with a depth sensor with questionable real life application and the ultrawide module at the front is no more. The main 64MP camera has received a new second-gen sensor that will be tasked with zooming and offsetting the loss. We'll see how well that goes when we complete our Realme 7 Pro review though.

The other two rear cameras - the 8MP ultrawide and the 2MP macro snappers are unchanged. 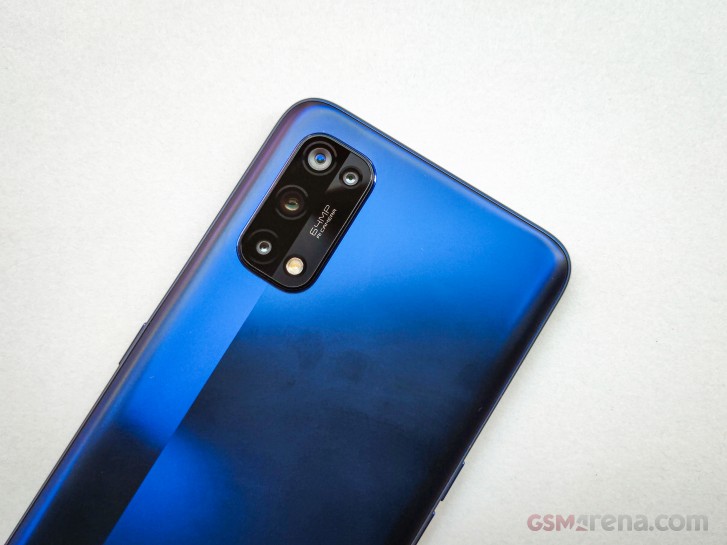 Next up there's the charging boost. Yep, the new 7 Pro is finally on par with the company's flagships and offers even 65W charging capable of topping up the battery from flat to 100% in just 42 minutes according to our initial testing. Not bad for a 4,500 mAh battery. The best part is that the phone and charger are compatible with the 18W USB Power Delivery standard, so you can get decently fast charges even if you don't carry the charger from the box with you. 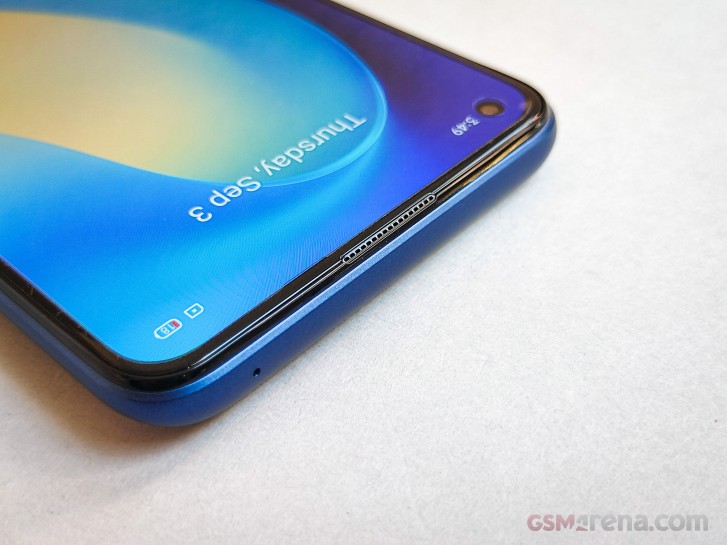 Finally, the Realme 7 Pro is now equipped with stereo loudspeakers with Dolby Atmos tuning. Those are certainly a big upgrade over what the Realme 6 Pro offered, but we weren't able to properly test their performance in the short time we had with the phone.

Which network are you going to use 5g phone on? Reaserwch 5g first then talk instead of making stupid comments.