Realme 8 Pro may have surfaced at the FCC with a 4,500 mAh battery and 65W SuperDart Charge

CEO Madhav Sheth already revealed that the Realme 8 will have a 5,000 mAh battery with 30W Dart Charge, so you’d expect the Realme 8 Pro to go faster. And this could be the proof – FCC documents detailing a Realme RMX3081 have surfaced, which appears to be the Realme 8 Pro 4G.

The docs show that a 65W charger will be used to fill the phone’s 4,500 mAh battery (typical capacity). That matches the specs for the company’s SuperDart chargers and if the Realme 7 Pro is any indication (it has the same battery capacity), a full charge will take only 34 minutes with the battery going from 0% to 43% in the first 10 minutes. 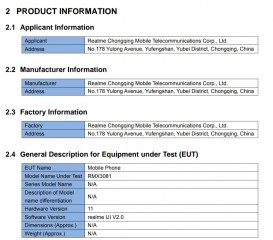 The phone will launch with Realme UI 2.0 out of the box, that is the company’s Android 11-based firmware. Again, this is the 4G version of the Realme 8 Pro, we expect to see a 5G version as well. Unofficial info suggests that the 4G model will be powered by the Snapdragon 730G.

The Realme 8 Pro is not focused on performance – it is all about the camera experience and the other half of Realme’s dual flagship strategy after the Realme GT launch yesterday. The company has already confirmed that the 8 Pro will have a 108 MP main camera based on the ISOCELL HM2 sensor (1/1.52”, 0.7 µm native pixels, 9-in-1 binning). The vanilla Realme 8 and the GT both have 64 MP main cams.

Realme has not set an announcement date for the 8-series just yet.

Global market is wide open for a 5G version of the upcoming realme 8 Pro since its main rival's newest Note series doesn't have that superamoled 120hz refresh rate with 108MP main camera and 5G connectivity offering, which is a shame.

Pls camera can be decent focus on the performance