Two Realme 9 Pro phones will be unveiled on February 16 (tomorrow) and this may be the last teaser before the big show – and, really, it’s all the teasing we need, since the company has confirmed key details of both phones, some of which we’ve only seen in rumored form, others not even that.

The Realme 9 Pro+ will be powered by the Dimensity 920 and aims to be Europe’s first phone with this chip, although this particular teaser hails from Indonesia, where the two Pros will launch tomorrow (and India as well).

The phone will be equipped with a 50 MP Sony IMX766 sensor (1/1.56”, 1.0 µm pixels). Realme is so confident in this camera that it set up a head-to-head comparison between the 9 Pro+ and some of the best Android camera phones: the Pixel 6, the Xiaomi 12 and the Galaxy S21 Ultra. 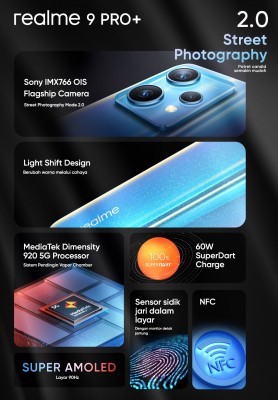 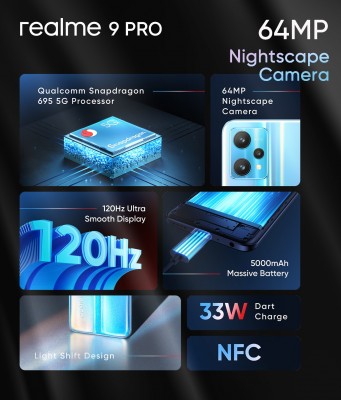 The Realme 9 Pro+ will feature an AMOLED display with a built-in fingerprint reader that has a neat trick – it can measure your heart rate. The screen will use a Super AMOLED panel with 90 Hz refresh rate. On the rear, the phone will have a special color-changing Light Shift design (this wasn’t confirmed, but we expect to see both Pros in three colors).

Finally, the Pro+ will support 60W fast charging, battery capacity is as yet unknown.

Moving on to the Realme 9 Pro, this one will be powered by the Snapdragon 695. Also, as the leaks suggested, it will have a 5,000 mAh battery – with support 33W charging power. This phone too will also have the Light Shift design on its back.

Here, the main camera has an unnamed sensor with 64 MP resolution. On the front, more differences. The display will offer 120 Hz refresh rate, though with no clarification of the panel, it will most likely be an LCD. Both this one and the Pro+ will support NFC and will arrive with Realme UI 3.0 (based on Android 12).

Check back with us tomorrow for detailed coverage of the Realme 9 Pro launch.

It's official: Realme 9 Pro series is coming on February 16

When these two phones will be launched in pakistan?