Realme already brought several new C-series members to its lineup with the C11, C12 and C15 and it looks like we’re in for another model dubbed Realme C17. The device appeared in a Geekbench listing bearing the RMX2101 model number revealing it's powered by the entry-level Snapdragon 460 alongside 6GB RAM - the most in the C-series so far.

It scored a respectable 253 points on the single-core part and 1,248 points on the multi-core test. The same phone previously bagged certifications from Indonesia’s Sertifikasi and TKDN as well as Thailand’s NBTC. 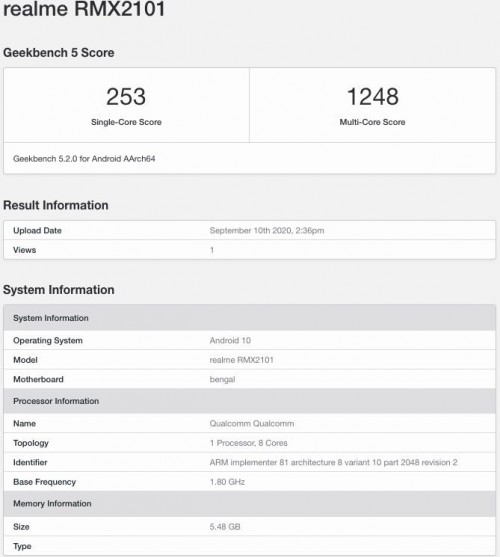 Starting with the Realme C3, all C-series phones come with at least 5,000 mAh batteries which means we’re in for a large capacity cell on the C17 too. It remains to be seen what else the phone will pack but we’ll surely see more leaks in the coming weeks so stay tuned.

Realme C11 hits Europe for €99, early buyers get the Band for free

Over 60,000 Realme C12 phones sold in India, the second batch is coming next week

Realme launched nice features with gaming processors in Realme C12 and C15. Then why does C17 has Snapdragon 460? This is disappointing..

While the previous phones of the C series were powered by Mediatek chipsets, switching over to Snapdragon might just affect the price point of the phone. Should have stuck with Mediatek in my opinion