Last month Realme confirmed it will attend the IFA conference in Berlin for the first time in its history. Today the company laid out its plans for the September 4 event.

Realme will “introduce its latest brand and product strategy” and everything will be live-streamed on YouTube. It is scheduled to begin at 12:25 PM local time, but we’ll hear news only about the AIoT and 5G ecosystem. 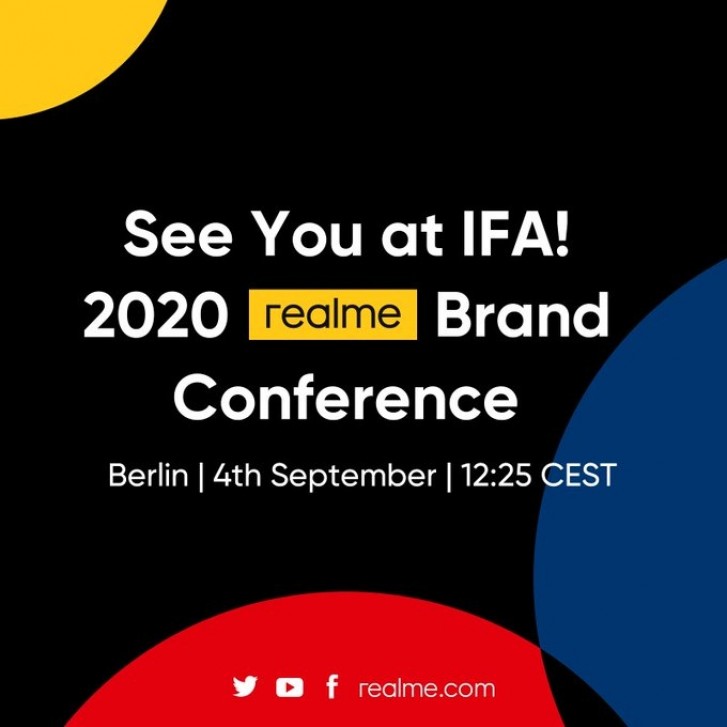 The IFA event will be the first time Madhav Sheth will appear as the newly appointed CEO of Realme Europe, revealing the company's roadmap for 2020 at the Old Continent. The company promised it will keep its strong focus on its globalization strategy while further deepening its localization strategies for various markets - this means Realme smartphones could appear bundled in carrier deals, which is the preferred way to purchase a device in Europe.

One thing the IFA event will lack is new smartphones. However, a Realme spokesperson confirmed that the Realme 7 family will be announced in Europe shortly after that so it's not going to be a long wait.

Realme reports growth in H1 2020, lays out ambitious plans for the rest of the year

It's official: Realme 7 and 7 Pro are coming on September 3

Yes it does. Flagships have the need for more features, that's why they're filled to the brim. While budet phones, they are only fitted with a big battery, a small potato for a cpu and they're ready to go

Reveal brand? Could be 'Narzo' will be announce as they new sub brand.

Realme and Xiaomi models are very much similar in terms of spec... Difference is IR port. Hope they introduce it in new models... Secondly if we compare with intl market models we miss NFC and band options, it is becoming difficult to use phones out ...