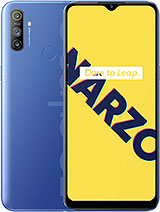 Anonymous, 11 Jun 2020does it have a gyro sensorYes

Prone to prone, 08 Sep 2020Is there any one else whose battery drains out faster after... moreYes but fixed after new update

Is there any one else whose battery drains out faster after A.39 update, Or it's just mine???

Papai, 16 Aug 2020Performance wise which is better Narzo 10A & C3Realme Narzo 10A is actually Realme C3 with additional macro camera and different back design. In some regions, Narzo 10A is sold as Realme C3 (3 cameras).

gustang, 23 May 2020Stingy. Still no gyro, still no 64gb storage. which i think... moreIt does not have physical gyroscope but it does support all the features a phone with physical gyroscope does. It can play 360 videos and even run pubg with gyro.

Performance wise which is better Narzo 10A & C3

Between Realme Narzo 10A & C3 which is better regarding call quality/ internet speed/ Camera?

Rk, 06 Aug 2020I i want to buy this phone but before that i just wanted to... moreYou won't find it in all the newer units and if there is, you can uninstall that easily. Realme has also removed clean master cleaner

I i want to buy this phone but before that i just wanted to know that wheather the banned apps are removed or not like helo app??

How many bloatwares are there in this device. Can it be removed normally or abd is required. plz tell

I have read some best opinion on it. You can see here reviews on Eobi https://eobi.pk/

Anonymous, 11 Jun 2020does it have a gyro sensorNerely every phone has it, even my moto g(2nd gen 2016). So I bet this phone also have gyro sensor.

does it have a gyro sensor

Reyansh M, 01 Jun 2020The battery is solid and will definitely be able to provid... moreAgreed. The combination of 5000mAh battery and Mediatek Helio G70 processor are perfect for a smooth gameplay for long hours

The battery is solid and will definitely be able to provide a decent gaming session.

After i compared it...so this is actually rebranded phone of realme3 3cam version eh... No wonder they dont upgrade the lack of gyro also lack of 64gb version...its the totally the same phone except the name and backdoor. A lil bit more it will be decent phone

Stingy. Still no gyro, still no 64gb storage. which i think is bare minimum for 2020 casual gaming phone. Apps+data+files+photos+songs especially games are getting big... 32gb is far from enough. Too far. Just add those 2 (gyro+64gb storage) and some $$ on it. People wont mind a little extra bucks for gyro and 64gb