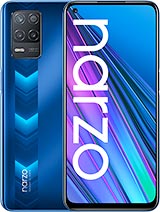 It is true?: Active 4G on both SIM cards - Yes
Information about active bands separately for both SIMs is missing

second microphone for noise cancellation is missing on this phone. produce low sounds on receiver's phone when voice messages are sent through WhatsApp / imo. tested with my another phone. apart from that it is a decent phone.

came with Russian bloatware apps preinstalled though I ordered global version. poor mic quality causes noise when voices message are sent. FM Radio is missing for a phone under 175$ which is absurd.

What UFS is it using?

Is this phone better than Realme 7 5G

The phone features a good looking design that’s not very bland or too loud.

It captures some Decent daylight photographs with punchy colours and average dynamic range.

Davidariyan, 26 May 2021Good not too shabby. Mediocre at best. But what is that? A... moreIt is in their **inese blood. Cant help to stop it. Imitation at its best

It seemd clear, the difference between Realme 8 5G and Narzo30 5G is only the RAM options, in which Narzo30 5g has 6GB and Realme 8 5G has 4GB & 6GB with little more money.

5G-enabled phones are increasingly making their presence felt in the Indian market, which makes sense to some extent since the country is gearing up to launch the next generation of broadband cellular networks.

Narzo 30 pro comes at similar price. why would anyone buy this?

freak, 20 Jun 2021its same as realme 8 5g (rebranded but with change in back ... moreNarzo series is made by BBK to block Poco brand while Realme is made to block Redmi. Mi series play in different segment and price (more expensive, more feature, better spec)..

I don't know what's wrong with Realme Narzo 30 and Realme 8 are exactly the same and I think pricing would be same too then what's the point of launch.