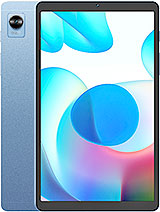 Got this last month. Im not a heavy user, but this is the best for me!

Jemlim, 10 Jul 2022Samsung Tab A8. It's chipset supports it so probably s... moreThe problem with Samsung devices is that they mostly use eMMC or UFS capped at eMMC speeds on UFS supported chipsets

you have to suffer, 10 Jul 2022well then i'll just go for other options then. what t... moreSamsung Tab A8. It's chipset supports it so probably should have UFS.

Jemlim, 10 Jul 2022If you want one, go for the realme pad then. And live with ... morewell then i'll just go for other options then.
what tablet would you suggest me other than this?

you have to suffer, 27 May 2022i want a tablet for video editing. because editing videos o... moreIf you want one, go for the realme pad then. And live with that crappy eMMC.

RishiGuru, 29 Apr 2022On paper Unisoc T616 is a good SoC with performance figures... moreDoes this support native video calling? In this you can have direct video call without internet or wifi if both users have Jio sim or both have airtel sim. All Redmi and Realme phones have this direct native video calling present

does this tablet get software updates (android 12, security patches)?

I'm using this tablet as my "smartphone" for about 2 weeks (bought the 4G EU version). Here is a short review (and sorry, english isn't my first language).

--Build quality, handling--
Feel solid enough. It's slightly too big for daily usage as a smartphone. You can put it in your back pocket, but it's still feel a bit awkward. Between 7,5" and 8" screen, it would have been perfect. The flat back make the tablet hard to pick up when you are receiving a call.

--Screen--
Decent max brightness. Horrible viewing angles. You'll mostly notice the low resolution on small texts, but other than that, it's not a big issue. Despite the low refresh rate, the display is smooth, and there isn't a too big difference with a 120hz panel. Color accuracy is good. OLED isn't really far superior (I also have a galaxy tab S7+). Good for watching youtube, netflix, twitch, or any other streaming services. Also very goof for using maps. Auto-brightness is bad in dark room (always need to manually adjust).

--Camera--
The main camera is horrible. The front camera is even worse. This is the weakest point of the tablet. You'll have to carry something else if you want to take good picture.

--Battery life--
Very good. Endurance rating is slightly above my Asus ROG Phone II. I have average usage of the tablet (whatsapp, texting, music streaming, web browsing, not too much phone call, watching some youtube/netflix videos, reading documents, using maps). I don't do gaming on phone/tablet (I picked ROG PHONE 2 because it was a good phone for a good price). For the last 2 weeks, I only have to charge the tablet 4 times.

--Sound quality / phone call experience--
Clear and loud stereo speakers. Weak microphone (people won't clearly ear you if the tablet isn't close to your mouth). Decent power on headphone jack. There is no earpiece, so whenever you receive a call, sound come from the speakers. No problem if you are alone, but you'll probably need bluetooth headphones or something else.

--Conclusion--
For the price, good experience overall, as a smartphone and as a tablet. Screen is good enough but could be better (full HD). As long as you don't need a good camera and you don't do heavy tasks, the tablet is good enough. I hope that one day, I'll find a device with 8" screen, full hd display, and a better camera. I would gladly pay 400 to 500 € for such device.

Good in a glance, but TERRIBLE DISPLAY SCREEN.
low ppi, low resolution.
can see doted pixel on display.
the saize is just what i want, but REALME destroy this with such terrible display

Jemlim, 27 May 2022This tablet is not much focused on editing, mani want a tablet for video editing. because editing videos on phones is painful to use, sometimes i pressed the wrong button when i pressed the button what i want. i use a redmi note 4 for editing...

you have to suffer, 26 May 2022i'd rather living with helio p22t or g70 on an tablet ... moreThis tablet is not much focused on editing, man

Jemlim, 25 May 2022So would you want hello p22t? That sucks. In fact, it is mu... morei'd rather living with helio p22t or g70 on an tablet than that crappy unisoc that lags in editing.

Anonymous, 29 Mar 2022ipad mini 5’s literally better than thisThat is not comparable, with such a huge price difference.

179 ppi on a tablet? That would give me nightmares to use 🥶

mqondy, 07 May 2022Is it goid or bad, i hav no idea what unisoc chips perfom likethey perform like 2014 mediatek soc if i used them for gaming. so i had to gift for my younger brother