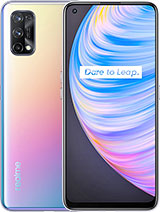 It seems the higher end a phone is, the less likely it will allow 3.5mm audio jack. I swear I’ll never buy a phone that doesn’t include it - until wireless audio quality is on par with cable.

u must accept that, that none of Vivo, oppo phones have Activate on the phone Indicator Led light or even Infrared port
from Low-end to High-end


lets be honest if Realme just remove that Usb type-c port thats using for charging & Add wireless charger instead of it.
here we will have another Meizu ZERO

oh that Meizu Zero, they said win alot of prizes
with Zero Sale & also after a while canceled

Socks, 13 Oct 2020Why would there be an infra red port and an led notificatio... moreEven New

JUST GO & see the prices of phones with SD765 (all makers except some models of vivo, oppo, xiaomi)
they have very high price tag

Anonymous, 13 Oct 2020Buy a 2015 phone.why should someone buy a 2015 phone to grab some ordinary options thats being them in a phone its usual thing

Is it using Sony IMX sensor?

KhizerWali, 13 Oct 2020dimensity chip in 2020? srsly...What are you talking about 2020? They only released the dimensity chipsets this year. You're talking as if it's some archaic rehashed chipset. These new mediatek have shown that they can hold their own with the best sd700 series and the dimensity 1000 is actually outperforming the snapdragon 855 from last year. The only thing nobody knows with these chipsets in relation to established Kirin and snapdragon chipsets is how durable they will be. How will they cope in 6 months to a year.

Anonymous, 13 Oct 2020It's packing 5G, bright AMOLED, fast processor, hi-res... moreTotally agree. The base model is 128gb. That's more than adequate. Lack of headphone jack is annoying too but to be honest I don't find myself using earphones very often anyway. I think that 4300mah is plenty too because with AMOLED, the energy drain is a fair bit less really.

Anonymous, 13 Oct 2020I don't know if they want to sell it or keep it to the... moreIt's packing 5G, bright AMOLED, fast processor, hi-res audio at $230, what more you can expect, dimensity is a highly efficient 7nm, that factors in the battery.

As for the old school SD and 3.5 those are going away no matter what, current internal storage of new phones is massive, no need for SD.

People complaining about the SD card, ok but 128 MB and 256MB are enough for almost anyone, when phones were 4,8,16 MB SD card was understandably necessary.

The 3.5 jack will go away sooner or later, you people better get used to it, high quality usb headphones are available already. Your 3.5 headphones you have now are not going to last you forever.

I don't know if they want to sell it or keep it to themselves. No SD Card, Battery is less than Q2, No Audio Jack. Looks like a cheap iPhone to me.

No audio Jack, No sd card, No nfc, No buy thanks.

samsung had learned their lessons to insert huge @ss batteries with amoled screens and selling them for below USD 150. Though the exynos processor is a joke. The screen and battery alone are worthwhile to pay. These new clowns like realme are still playing the 4000ish battery games.

Bruh this is just a worse Redmi 10X 5G for pretty much the same price. Doesn't even have the jack while the 10X 5G does.

Not even 90hz ? what is the different between this and the realme 7 pro just the chipest ??

Socks, 13 Oct 2020Why would there be an infra red port and an led notificatio... moreno dude