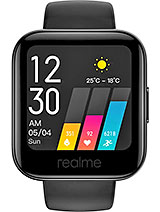 Is this watch support gallery

there's a lot of bugs in the software. it senses touch voluntarily. I can't even do my work properly. Don't know what I'll do with a toy like this.

May i know if buy this watch and not using realme phone
Can call by this watch?
because i heard if using this watch to call just connect through the realme link app

Hajimashte, 05 Nov 2020The realme watch is IP68 rated only, and it SPECIFICALLY sa... moreso then why give it an IP rating in the first place?!

my sister got this watch and i tried it myself, honestly u can do a lot worse for 60 bucks. this is a great watch. Spo2, heart rate monitor, able to control music, read messages and etc in this was really nice and accurate side by side my dad's samsung SMR-800 watch. u r even getting an oximeter for 59 bucks, apple S6 watch has oximeter but for like 10 times the price which is nuts. i highly recommend this if u r getting ur first smartwatch

Hajimashte, 05 Nov 2020The realme watch is IP68 rated only, and it SPECIFICALLY sa... moreHow to connect here in uganda

supermostino9, 25 Jul 2020This Realme Watch was truly a disappointment and a terrible... moreIt is not correct. I am using it and it is working tremendously fine without any bugs. It has an Oximeter and Heartbeat measuring scale which is also working correctly. I fully support this REALME SMART WATCH.

Anonymous, 06 Jun 2020What are you talking about? If they make the bezels thinner... morethey have purposely done that bcoz the screen is only 35mm but to look like an expensive watch when screen is off it looks like a 46mm apple or oppo watch. its a good idea.

supermostino9, 25 Jul 2020This Realme Watch was truly a disappointment and a terrible... moreThe realme watch is IP68 rated only, and it SPECIFICALLY says on their website not to wear while showering or swimming. How can you expect a product to work if you abuse it in such a way?

Aflal , 05 Jun 2020Is this watch can send me notification from social networks... moreNo

Honestly, I strongly suspect this is just one of the generic MTK smartwatches you can buy unbranded from China.... without any really meaningful changes. It's worth noting those have a monolithic firmware, so they're incapable of upgrading with more apps beyond an extremely limited subset, and won't likely get more.

Chinese smartwatches like this one, provided I'm right, are basically the same. $15 to $125. Almost all of them pack some sort of MTK processor, the same monolith firmware (literally the entire thing is one binary, it doesn't actually have separate "apps", and it's often not even properly customized for whatever watch face they throw it on. IE, mine is circular KW18 and it was clearly not redone from the firmware for a square watch.)

My honest recommendation - if you wanna float smart watches and see if it's territory you wanna explore - buy a cheapo $15-$20 offering like the DZ209's. They're... OK, for $15. If you like the concept, go and get a proper one. But these ones with the Chinese sort of aesthetic and branding going about them - they're basically no different in any meaningful ways along the price spectrum.

Perhaps that one I heard OnePlus is rumoured to come out with will be a good price x features, but this one definitely seems like a hard pass. More of the same cheapo chinese ones I've already got.

This Realme Watch was truly a disappointment and a terrible purchase! Full of Bugs that make it unusable as when you bathe in the pool or the sea and the clock goes crazy and resets itself! The battery lasts just over 2 days and the heart rate monitor is completely stared and unreliable therefore useless! It costs little but does not work so it is useless to buy it better an Amazfit bip lite s at the same price. Realme after-sales service is totally useless. Disappointed

Tictech time, 09 Jun 2020Bruh then put the logo on the band. even apple doesn't show... moreYea, they dont...
But they also charge close to 12x the price
I wouldn't be so picky considering the price tbh

Anonymous, 06 Jun 2020What are you talking about? If they make the bezels thinner... moreBruh then put the logo on the band. even apple doesn't show their logo on the front.

Anonymous, 06 Jun 2020Why the HUGE bezels?! What a waste of screen real estate. ... moreWhat are you talking about? If they make the bezels thinner, where will they put their logo?! It's super important that you gotta know you're using a Realme Watch every time you look at the screen! This watch would have been dead on arrival if they didn't have the logo!

Why the HUGE bezels?! What a waste of screen real estate. Take it to the edge!

They have a square inch and a half of room on the face of the watch, and what do they decide is a good idea? Putting their massive ugly logo on it!

Is this watch can send me notification from social networks and someone calling with an option to answer or decline the call from the watch?