Realme unveiled the X3 SuperZoom last week, but kept the vanilla X3 under wraps. The phone does exist, however, it even showed up on the Google Play Console, which posted some of the key specs.

The Realme X3 is powered by the same Snapdragon 855+ as the SuperZoom. It gets less RAM, 8GB instead of 12GB. The Play Console doesn’t say it, but it’s unlikely that this has 5G connectivity.

The display will have a 1,080 x 2,400px resolution. It’s not clear if it will be a 120Hz display like on the SuperZoom, however. The phone will come with Android 10 out of the box, no surprise here. 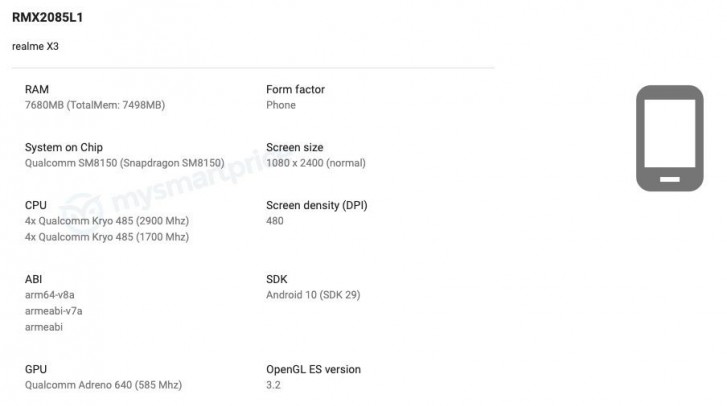 There are three X3 versions (possibly regional variants): RMX2081L1, RMX2085L1, RMX2086L1. They all have the same specs, at least the specs revealed by the Play Console. All three were certified by India’s BIS, other than that there’s not much info on when and where the X3 will launch.

There were rumors of 5G-connected X3 models, but those proved to be part of the X50 family instead. TENAA detailed the RMX2142 (powered by the Snapdragon 765G), which turned out to be the Realme X50m. The “X3 Pro” (RMX2072 with the Snapdragon 865) proved to be the Realme X50 Pro Player instead. The RMX208xL1 are definitely “Realme X3” phones, however.

What's about the display?

Any idea when will it launch in India and at what price point?

has no one noticed that the DPI is absurd and probably wrong for what is essentially a full HD screen? unless they shrunk the phone size. 480 dpi out of a 1080p screen?