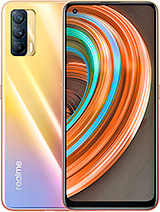 The Realme X7 5G is fairly compact by today's standards. It is an easy phone to use one-handed.

@gsmarena When can we expect a full review of realme x7 indian variant.. ?? Eagerly waiting

I noticed a weird sound (not from speakers), I just want to check if everyone gets it or it's just me.

Whenever I put the phone on table/bed or any plane surface it sounds like something is clicking/tapping inside the phone.

Like there is some moving part inside the phone, probably source seems to me camera.

It happens when always either mobile is on or off. Either inside cover or not.

I googled about this, most results are saying that this might happen due to optical image stabilization (very common issue on Samsung phones). But this device doesn't have any OIS, so I guess that shouldn't be the case.

Other realme X7 owners, please check if the phone does produce the same sounds and let me know ASAP. I'll need to put a replacement order if it's only me.

Trick to reproduce : On a wooden table, put the left side of the device first and the release right side from 3-4 cms should produce the sound.

Realme team, if it's a normal sound, I'm curious to what is producing it.

Ritz 007, 13 Mar 2021Please confirm what sensor is being used on Realme X7 speci... moreIt’s not Sony sensor. It has Samsung sensor not sure which particular version. But selfie is Sony imx471.

Please confirm what sensor is being used on Realme X7 specifically. It is mentioned on realme.com that the X7 Pro has Sony IMX686 but as for X7, there is no mention of the sensor used. So does that mean it has a Samsung sensor (ISOCELL GW1 / 2 / 3)

When is the gsmarena review coming for relame x7 indian version. Waiting.

just realized the fact realme never release the real x7 outside of china. let alone the x7 pro. realme x7 pro is such an amazing phone with great design and specs sadly no jack, no sd slot, no worldwide release. they just keep rebranding and releasing garbage stupid phones for country other than china. i started to hate realme brand.

Realme and poco has beed disappointing with all their rebranding scheme.

Wtf is this am vry disappointed such a good deal without jack? And also sd card?

Its an indian variant of V15 5G, is selling it everywhere under the same name so hard for this stup!d company

Can not believe realme 7 pro is more better than this phone..

Gary paul, 16 Feb 2021Why realme is taking out headphone jacks its such a deal breaker Agree, sd card also, disappointment next...

Syed Shahid Akbar, 12 Feb 2021I am using realme 2 pro for the last 2 years, believe me th... moreWhat's your opinion about this phone, any alternative to this phone

I am using realme 2 pro for the last 2 years, believe me that it's display is super bright, camera and sound is very good, I love my realme 2 pro. Thanks