The Realme X2 Pro recently got the beta version of Android 10-based Realme UI, and now it's the vanilla X that's receiving the newest version of Realme's custom Android skin.

The new beta firmware sports version number RMX1901_11_C.02, but it's only rolling to the Realme X in China. The stable build will start rolling out for Chinese units next month and those who can't wait can enroll in the beta program. Head this way for more details.

The Realme X Lite (aka 3 Pro) will also receive the stable Realme UI next month, while Realme Q (aka 5 Pro) will get it in March. However, users of Realme X2 and X2 Pro will have to wait till April to get Realme UI through the stable channel.

This timeline is for the Chinese units, though, and the stable build of Realme's customized UI for global versions is slated to roll out this month, with the 3 Pro and XT being the first smartphones to get a taste of it. Check out the image below for more details. 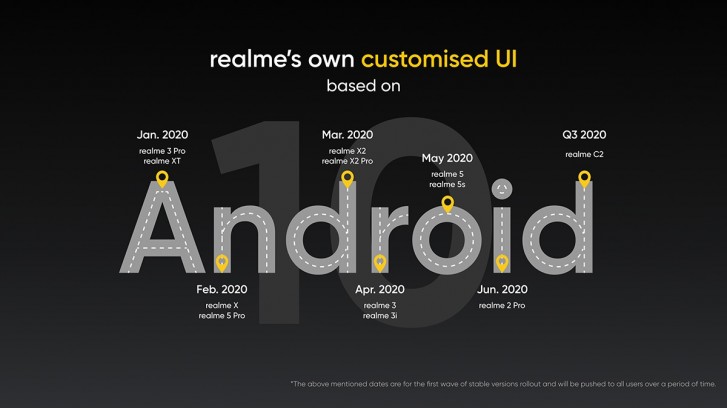 It's about 5 march. And I didn't receive the android 10 update till now. According to image it must be given in February but its march. But no process

does anyone recived yet?