RED teases Lithium 3D camera add-on for the Hydrogen One

The RED Hydrogen One bet big on two things – its holographic display and its module system. We haven’t seen much of the latter, but that’s about to change. The first officially confirmed module is the Lithium camera.

It’s a 3D stereoscopic camera that will feature two image sensors and zoom lenses. The package is much more compact than the typical 3D rig that involves a RED camera, a complicated optical system and a lot of know-how.

The Hydrogen One phone will serve as the display of the system as its H4V display (Holographic 4-View) is able to directly preview the 3D footage. This will allow aspiring filmmakers to adjust the scene and tweak settings in real time. 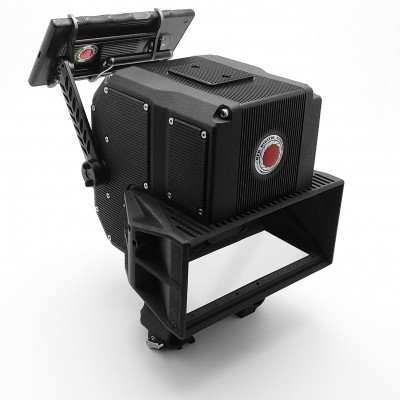 Lithium 3D camera add-on for the RED Hydrogen One

The Lithium camera isn’t targeting casual consumers. The current prototypes weight almost 3kg (6lbs), which is compact compared to pro setups, but still not something you can stick in your pocket.

Expect to see the Lithium later this year. How much it will cost is anyone’s guess at the moment, no details on the image sensors either (considering the weight, we may be looking at true RED sensors).

Everyone saw this coming, Hydrogen One is the cheapest unit & the add-on cost 10 times the device itself. Epic fail....

This is a big joke!..... How and when was the add on bocomes bigger than the phone?! Useless!