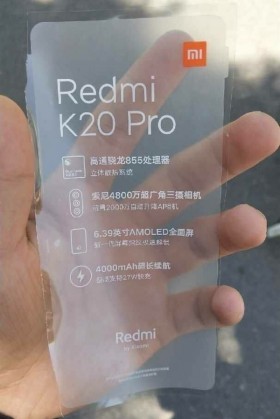 Xiaomi's offshoot Redmi is working on its first true flagship device, which will be powered by the Snapdragon 855 chipset. That much the company has confirmed through Redmi GM Lu Weibing's Weibo posts. We also know, from the same source, that this phone will not be called Redmi X, but something "better" instead.

So how about Redmi K20 Pro? Does that sound like a better name than Redmi X to you? Regardless of what you answer, if today's new purported leak from China is accurate and not just a hoax, that's exactly what you can expect the Redmi flagship to be marketed as. Doesn't really have a great ring to it, but its specs and performance and pricing will probably be much more important to people than the name.

The image to the left is said to show the protective sticker on top of the screen, the one you'll see when you buy a K20 Pro and take it out of the box. This is the sticker that's supposed to be removed before first use, which summarizes the main selling points of the phone you just bought.

So the Redmi K20 Pro is apparently going to have a 48 MP main rear camera, a 20 MP selfie shooter, a 6.39" AMOLED touchscreen, and a 4,000 mAh battery with 27W fast charging support. The main camera and screen size details have been leaked before, but either way you need to take this info with a grain of salt because it's not really confirmed yet. Hopefully Redmi will make this phone official soon.

Redmi confirms its upcoming flagship will have an ultrawide camera, 3.5mm jack and NFC

Jesus Christ. Have you tried to play around in the stock market or pursue a different career?