Redmi is preparing for the launch of the so-called “flagship killer” tomorrow, but before the K20 takes the stage, the brand had another thing to celebrate. It reached 10 million sales around the world of the Redmi Note 7 series, and it managed to do it in just 129 days.

Xiaomi co-founder Lei Jun shared the good news on Weibo, later followed by photos sharing a celebratory cake with all the key executives of the company and its sub-brand. 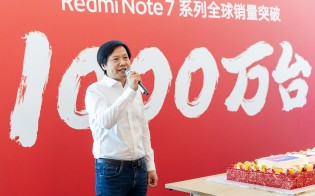 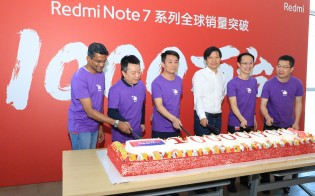 Lei Jun and other Xiaomi executives

Jun said the milestone is a victory and a testament of “holding Xiaomi values, such as high quality and value for your money”. He also reminded the company is ready for the next release, which is of the Redmi K20, taking place tomorrow afternoon local time.

The Redmi Note 7 series includes three phones on paper - Redmi Note 7, Redmi Note 7S and Redmi Note 7 Pro. The differences between the first two are scarce, although there are some - market availability and storage options. The Note 7 Pro, however, comes with a mightier chipset and a proper 48 MP camera with Sony IMX586 sensor.

Redmi Note 7 flies to space, takes photos, and returns without a scratch

Even it failed at jerryrigeverything tests its still a very solid device for affordable price.

I have a Redmi Note 4X, and Xiaomi left it on 7.0 Nougat. The Redmi S2 and Mi A2 Lite, both using the Snapdragon 625, FHD display (with A2 Lite only), and high memory and RAM configurations, are already on ANDROID 8 AND 9. "Xiaomi gives goo...

So, you're stuck with Redmi 1 or what?