Motorola might be about to add a new line to its portfolio as a photo of handset called One Power just leaked. It has no specs or any supporting info to go with it, but it does give a pretty good idea about the design.

The One Power will be the first Motorola phone to feature a notch on its screen and it will have pretty skinny bezels. 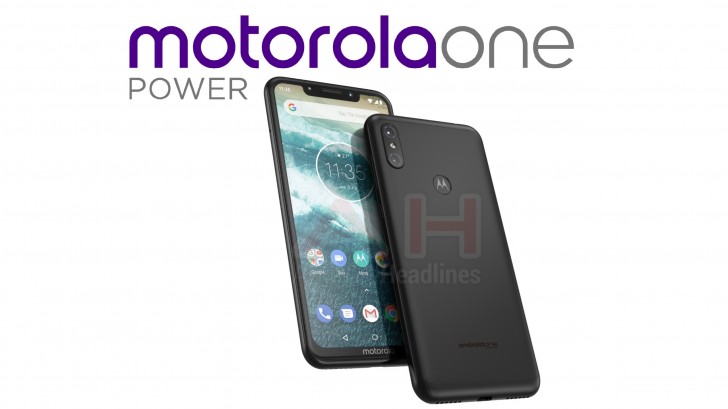 As the name suggests, the device will also be powered by the Android One platform, following in the footsteps of the Moto X4. Another thing the One Power will share with the X4 is a debut to the US, or at least that's what the source says.

As far as the render is concerned, we can clearly see the "Motorola" branding on the display's chin, fairly thin side and upper bezels and a notch housing the usual stuff - earpiece, selfie camera, probably an LED flash as the latest Moto devices all carry that feature. At the back a fingerprint reader and a vertically-stacked dual-camera setup in an iPhone X-like fashion are visible.

Unfortunately, nothing else is known about the device, so we don't really know where will it be positioned - will it be a mid-range device or Motorola's top-shelf offering? We can hope that the One Power will see daylight alongside the Moto Z3 Play on June 6, but it's more likely that it's not that far along in its development yet and we'll have to wait a bit longer.

Motorola G5S Plus gets updated to Android 8.1

Motorola Nexus 6 gets new Android 7.1.1 update for those stuck on Android 7.0

Oreo for Motorola Moto Z Play begins rolling out in US

Ahh, apple didn’t take the m7 design at all. The design for the iPhone 6 came from their 5th generation iPod touch which preceded the m7 (and makes a lot more sense from a design language point of view)