A new report surfaced about Samsung’s next Galaxy Z Flip foldable, particularly about the device’s displays. According to Ross Young, CEO of Display Supply Chain Consultants (DSCC), Google’s Pixel 7 will use a slightly smaller 6.3-inch display (the Pixel 6’s was 6.4 inches), and the Pixel 7 Pro will use the same size panel as the Pixel 6 Pro’s 6.7-inch one.

In addition, panel shipments will reportedly begin starting in May, one month ahead of The Pixel 6’s cycle. In another Tweet reply, it is mentioned that the Pixel 7 Pro’s panel will be LTPO and will feature 120Hz refresh rate just like the current generation.

Believe the Pro will be 120Hz with LTPO again…

The change in screen size corroborates an earlier report that the Pixel 7 would be slightly smaller than the Pixel 6. Also, based on early renders of the Pixel 7 and 7 Pro, the devices will look a lot like the current-gen Pixel 6 devices. 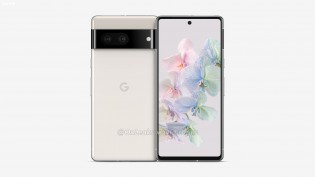 recent report claimed that both the Pixel 7 and Pixel 7 Pro (whose codenames are Cheetah and Panther, respectively) will use a second-generation Google Tensor chip fitted with an Exynos Modem 5300.

It’s still far too early to tell but in recent years Google hasn’t been able to keep much under wraps when it comes to Pixel leaks.

Vanilla Pixel 7 renders surface, the phone will be a bit smaller than the current model

Google adding its transcription feature to the Android app

Everybody wants a smaller phone, but no one's buying them. Pixel 5 and iPhone 12/13 Mini barely sold. The S22 is about the smallest you'll find these days.

It seems google pixel now has very huge screen size which is no longer convenient. The front design is more like samsung phones now which is not a fun of bulky phones. Thanks