Report: the Apple Watch Series 7 will feature a larger battery instead of adding new sensors

Ever since the original Apple Watch was released, Apple has been advertising a battery life of 18 hours. This is just as true for the first model as it is for the current Series 6. However, according to insider reports the company believes that it can get owners of older Watches to upgrade if the new model offers better battery life.

That will be the focus of the Apple Watch Series 7 to the exclusion of new sensors. According to Bloomberg, the 2022 model will introduce a body temperature sensor. That could have been added this year, but Cupertino thought it is wiser to use the room that would have been taken up by the sensor to fit in a larger battery.

The Apple S7 chip that will power the watch will switch to a more compact dual-sided system in a package (SiP) design, again to allow more room for the battery. The new watches will remain the same size as the current models or be imperceptibly thicker. 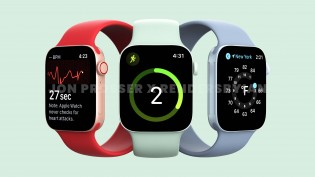 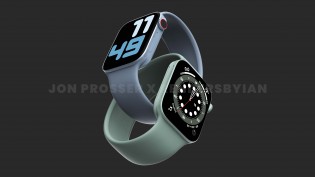 Another thing that has barely changed since the beginning is the exterior design. This is also getting spruced up with hopes that it will draw in owners of older models. The new design can be seen in these renders. The sides will be flat, more in line with the iPhone and iPad designs, the bezels around the screens will be thinner (which may lead to increased screen size) and better lamination will reduce the gap between the display and the protective glass.

The Apple Watch Series 7 is also expected to improve the UWB support. In the following years, Apple wants to introduce blood sugar and alcohol sensors to its watches, though those are still a few years away. Also, Apple will have to balance adding new sensors with the keeping the battery life as once the 2021 model finally improve on the 18 hours rating, future models can’t go backwards.

I hope they make the blood sugar or blood glucose their priority people would not have to wear skin sensors that would be amazing breakthrough for diabetics and insurance would probably support this and cover it. That would be a + for Apple $$.

I hope they make the blood sugar or blood glucose their priority people would not have to wear skin sensors that would be amazing breakthrough for diabetics and insurance would probably support this and cover it. That would be a + for Apple $$.

try spending time in a hospital. everyone there is wearing an Apple Watch