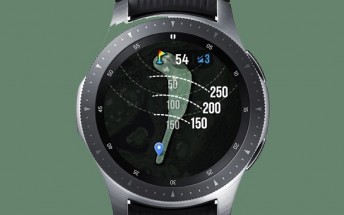 The Galaxy Watch Golf Edition is a follow-up to last year's Gear S3 Golf Edition and is only available in South Korea initially.

The watch itself is essentially the same as the vanilla Galaxy Watch plus the smart Caddie app that makes navigating through golf courses a lot easier. Additionally, the app can do record and shot tracking so you can track your progress. The Smart Caddie contains information about 60,000 golf courses around the world and Samsung says the battery life will be just enough to get you through 54 holes (or three full rounds).

Well i agree with you but phone covers everything. And for that mail issue if its something important you will grab your phone either and reply on that email. SDifference is that you will save 15 seconds of life each time you have to check your ...

Like I said watches can't replace phones. But to be able to check emails, messages or even answer call without getting phone everytime is great. Additional features what many people are using are step, distance counter, heart rate measuring. Again...

Man try reply on mail on watches :-) Well thats not possible so convient or not its useless. You still have to grab your phone from pocket and reply. Thus the facts.