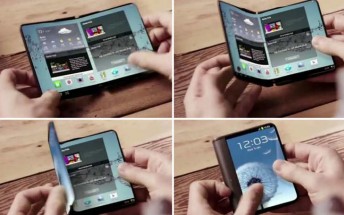 Last we heard, there were reports that Samsung showcased its foldable display phone - rumored to be called Galaxy X - to a selected few back in January at this year's CES show. Now, the company's CEO DJ Koh has provided a little more info on the project.

In an interview after unveiling the hot new Galaxy S9 series smartphones, the executive said they are working to ensure that the handset isn't just a gimmick. "I need complete confidence that we're delivering the best user experience when we're launching a new category," he said.

Koh didn't offer any details on the device's launch time frame, and also refused to offer more info on the phone, saying he'll do that when time comes to show off the handset. During the interview, he also revealed the Bixby-powered smart speaker will arrive "later this year."

Samsung and worth? Man i dont have that kind of nightmares and i hope i never will be. The day a Samsung will sell reasonable phone for a reasonable money will never come. Samsung ceo is ruled by the greed and customers pay their greed like is ...

Dont forget to expect 2000 price tag and another 1500 for repair at service.