Last month the Samsung Galaxy A21 passed through Geekbench, revealing key specs in the process. And now, a Samsung device which is likely the Galaxy A21s has been spotted on the benchmark database with a few of its specifications.

The Galaxy A21s, bearing model number SM-A217F, is powered by the unannounced Exynos 850 SoC. It runs Android 10 and has 3GB RAM onboard. However, there will likely be more RAM options that are yet to be confirmed. 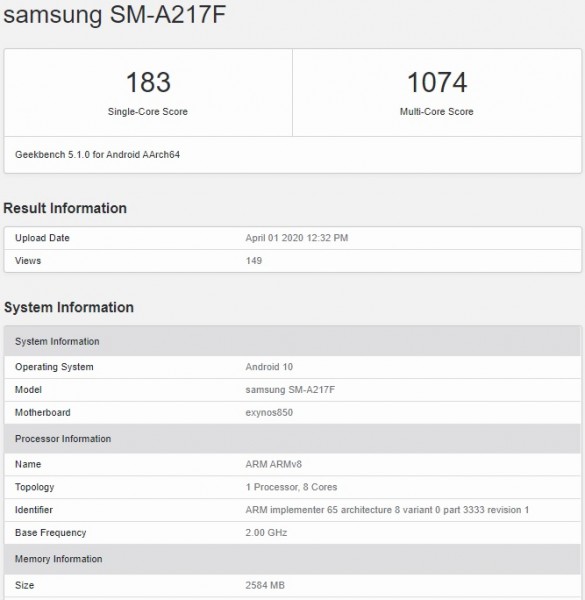 Geekbench doesn't reveal any other specs of the Galaxy A21s, but a report by SamMobile claimed the smartphone will come with 32GB and 64GB storage and have four color options - Black, Blue, White, and Red.

The report also claimed that A21s will pack a 2MP macro camera.

We don't know when Samsung will unveil the Galaxy A21s, but we'll likely hear more about it in the coming weeks.

Samsung mobile division plans to build its own foldable glass

I have to agree with you.

LOL, another phone using useless 2MP macro camera just so they can claim having an extra camera.

Exynos is not that bad, snapdragon is superior in the high end. But in the low end they are both good.