The display on the Galaxy A22 5G isn't particularly impressive on paper. This is one of the notable areas of downgrade compared to the vanilla A22, which gets a Super AMOLED 90Hz, HDR-capable panel instead. 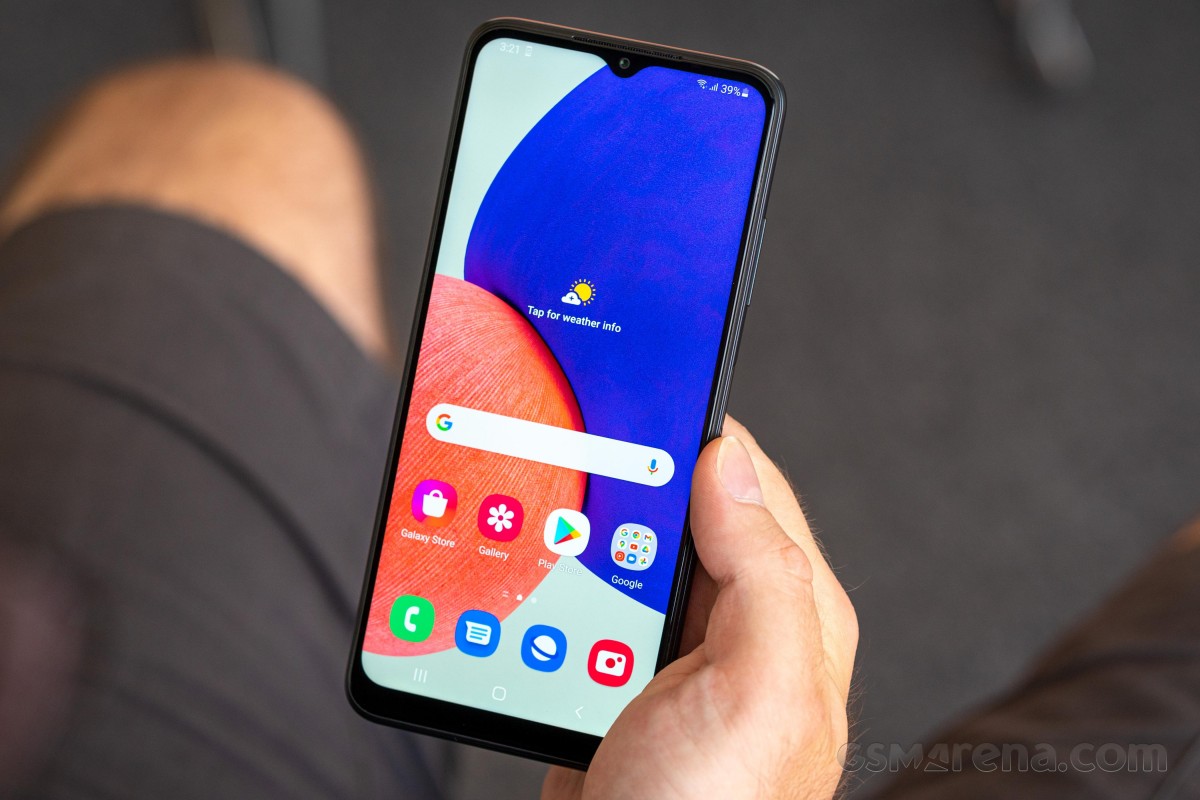 Furthermore, the A22 5G arguably has its bigger-brother A32 5G beat in the display department, as well, mostly due to its higher resolution and 90Hz native refresh rate. The arguable bit is mostly coming down to maximum brightness, where the A32 5G has a slight edge. To be fair, though, neither panel is particularly bright in the first place, with the A22 5G managing a maximum of 385 nits in our testing, with no max auto mode beyond that. Usable, but mostly a struggle outdoors. Contrast is very decent, though, since the A22 5G has nice blacks.

Since we are already comparing panels, it is also worth noting that the slow pixel response times and spearing we noticed with the Galaxy A32 5G is nowhere to be found on the A22 5G. It does much better in this respect, in both 60Hz and 90Hz modes.

Colors on the Galaxy A22 5G are far from accurate, even more so than what we measured with the A32 5G. Samsung clearly seems to be targeting the sRGB color space but failing with color accuracy rather badly. Greens and particularly blues are badly misaligned. And not just oversaturated, which we would understand, as a desire to deliver more "pop". No, the default color profile is just cold and bluish overall.

Unfortunately, there is no way to tweak colors either. Just like many other cheaper Samsung models, the A22 5G lacks color profiles or any fine adjustments.

There is no HDR support on the A22 5G. Software reporting confirms this fact as well, and so does the Netflix app. On the upside, we are quite happy to see Netflix offering FullHD as its maximum resolution. Actually, the A22 5G has the highest L1 certification, meaning that, theoretically, high-resolution streaming is possible with services like Netflix.

This has its positives and negatives, for sure, the latter mostly boiling down to the battery-wasting potential in certain situations, like watching video.

On the other hand, if you are aware of how the logic is set up and are remember to toggle down to 60Hz for things like movie watching sessions - everything else remains simple and straightforward. 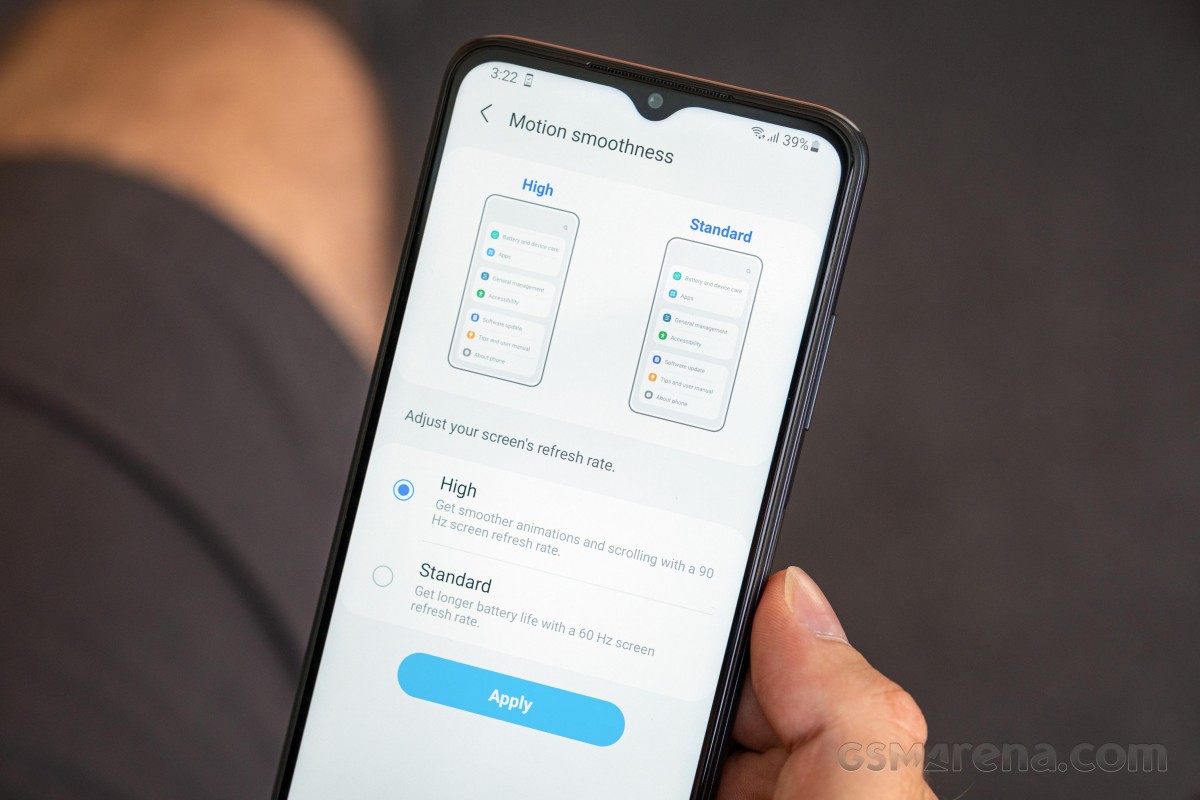 Both Chrome and the Samsung browser, which we tried, take full advantage of the 90Hz refresh rate of the display, as verified by the Blurbusters UFO test.

Samsung never promised any automatic refresh rate switching. Plus, having such logic implemented in a poor way has been known to cause issues with utilizing high refresh rate modes on other devices, especially for gaming. With this simple binary system in place, we managed to get a noticeably smoother (higher than 60fps) experience from pretty much every high-refresh-rate-supported game we tried.

The only situation we managed to find where the A22 5G switched down to 60Hz on its own was in the camera app. This is perfectly expected, since the camera viewfinder is one of those Android UI components that traditionally requires 60Hz to function properly. The same is typically true for the Google Maps UI, though, oddly enough, the A22 5G runs that at 90Hz, without any noticeable issues, at first glance.

The Galaxy A22 5G has a beefy 5,000 mAh battery. It also has a fairly beefy profile, in relative terms, measuring 9mm, compared to the vanilla Galaxy A22's 8.4mm. Pretty much exactly the difference in thickness between the Galaxy A32 5G and its vanilla counterpart. Both of the 5G variants also have a bit of hollow space underneath their rear panels, which all adds up to us being a bit salty that Samsung didn't cram a bit more juice into them. Never mind, 5,000 mAh is plenty for sure. 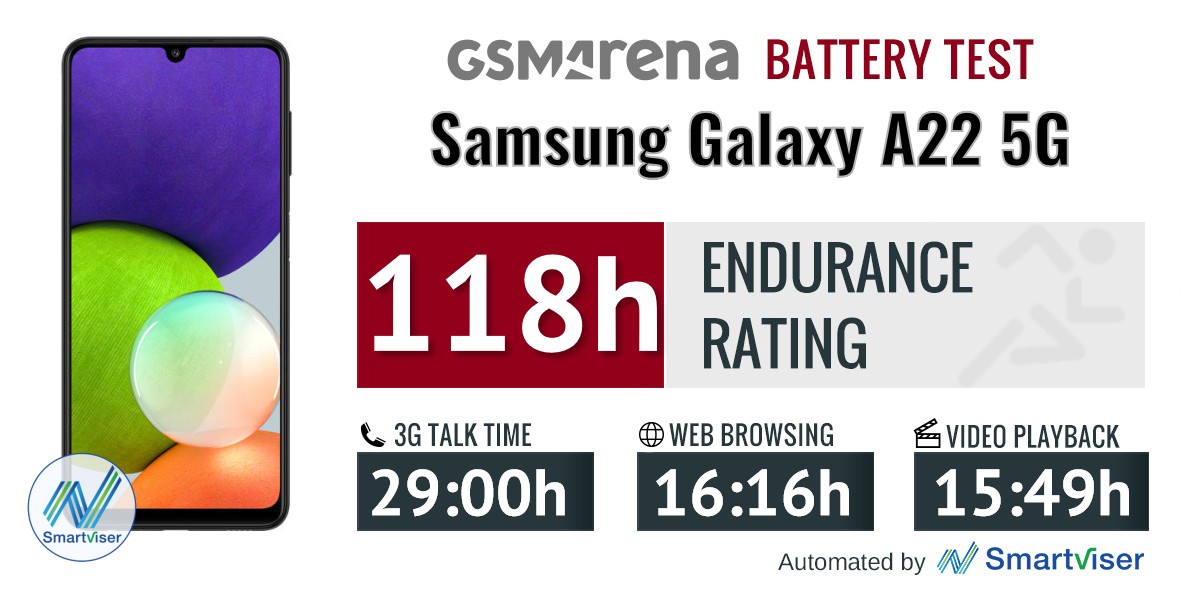 Let's talk numbers, though. In our proprietary test routine, the A22 5G managed a respectable 118 hours of total endurance. Not too shabby and looking at our battery database, about what we would expect from a Dimensity 700 chipset and a 5,000 mAh battery.

However, this score is near the bottom end of that scale, alongside the Realme 8 5G. We have seen notably better battery endurance from the same hardware combo on Xiaomi devices, like the Xiaomi Redmi Note 10 5G and the Poco M3 Pro 5G. Not by much, but overall, it does seem that Samsung falls a bit behind in on-screen scenarios.

It is important to note that as per our testing methodology, the 118 hours total endurance score was achieved by running web tests at the maximum 90Hz refresh rate of the Galaxy A22 5G, whereas the video portion was specifically running at 60Hz since that makes the most sense overall.

Here is the A22 5G running its web browsing tests at a fixed 60Hz to the tune of a bit over 30 minutes of extra endurance in that test, which was enough to bump total endurance up to 119 hours. 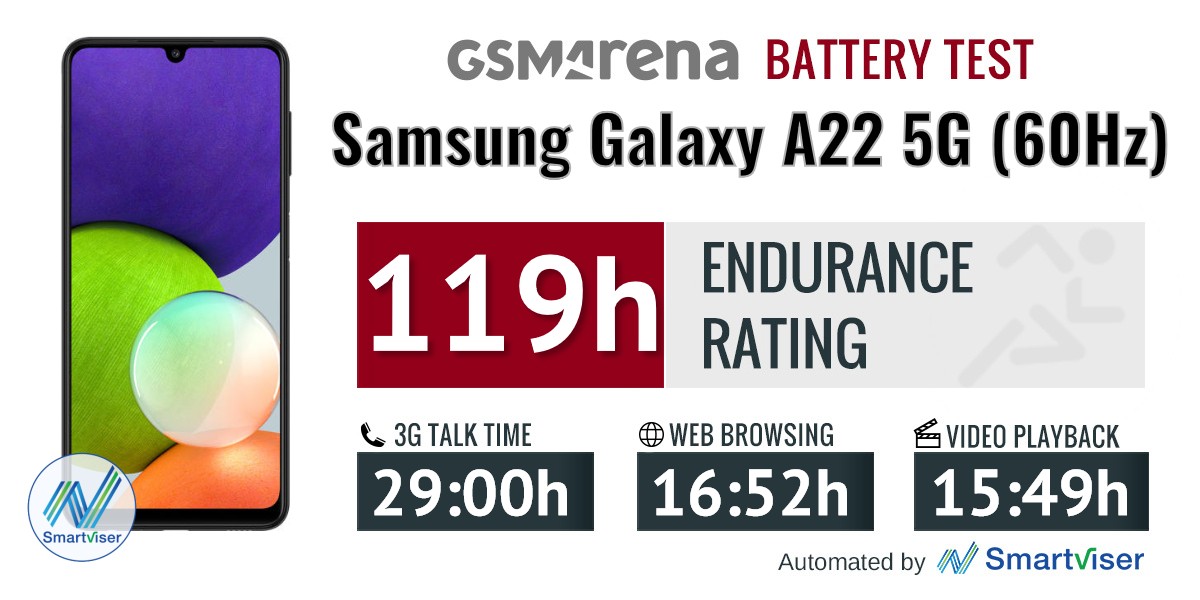 For charging, the Galaxy A22 has the familiar, old Samsung-staple that is 15W Adaptive Fast Charging (based on Quick Charge 2.0). You get a matching charger in the box. Nothing special overall. In fact, the Galaxy A22 5G has one of the slowest charging rates around, compared to its competitors. Using it, the A22 5G charges from flat to full in 2:29h, with 23% showing in the battery indicator half an hour into the process. Right around what we would expect from 15W AFC on a 5,000 mAh battery. At least you get faster charging than lesser Galaxies like the A02s and A12, if that counts for something.

On the flip side, the speaker on the A22 5G is a bit louder than that on the vanilla A32. Enough so to push it into the Average rating. To be clear, overall, that is still not impressive, but at least Samsung seems to have managed to make good use of the extra space inside the body of the A22 5G.

Frequency response is pretty similar on all three. That is to say, not overly impressive either. The Galaxy A22 5G doesn't have any built-in equalizers or optimizers for its loudspeaker. There is Dolby Atmos under audio settings, but that is just for headphones.

It is potentially worth noting that if you are willing to forego 5G connectivity, most competitors at this price point, like the Redmi Note 10 Pro and Poco X3, tend to offer a stereo speaker setup.

I am also disapointed about not having smart view

My a22 5g radio is not displaying on screen