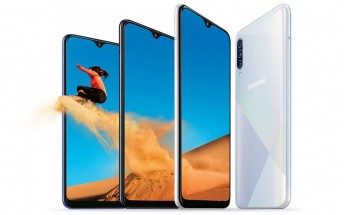 A few days ago Samsung launched the Galaxy A30s in India, and it seems like this phone's European debut is on the way too. Belsimpel, one of the largest phone retailers in the Netherlands, has listed the upcoming A30s today, and that thankfully gives us pricing information.

In the Netherlands, it looks like you'll be able to purchase one for 299 unlocked. Three colors will be on offer: white, black, and green. The retailer has the model with 4GB of RAM and 64GB of storage. Whether the other two versions of the phone (3/32GB and 4/128GB) will be sold in Europe or not is unclear - as are their prospective prices. Obviously though if they do make it to the continent then the lower-end one should be cheaper.

Note that Belsimpel's listing does give us an indication of how Samsung is going to price the brand new A-series device in the Eurozone, but there are sometimes variations between specific markets.

As for a release date, the retailer says to expect a shipping time of 2-4 working days if you order online, but that might not be very accurate since Samsung hasn't made the A30's presence in Europe official yet.

It has been available in Ukraine for some time now, for 6699 uah.

This phone only sales for $200 in my country.