The Samsung Galaxy A31 has bagged Bluetooth certification, hinting at an imminent launch.

The A31 is listed on Bluetooth SIG's website with model number SM-A315F/DS, and other than confirming Bluetooth 5.0, the listing doesn't reveal any other specs of the smartphone. 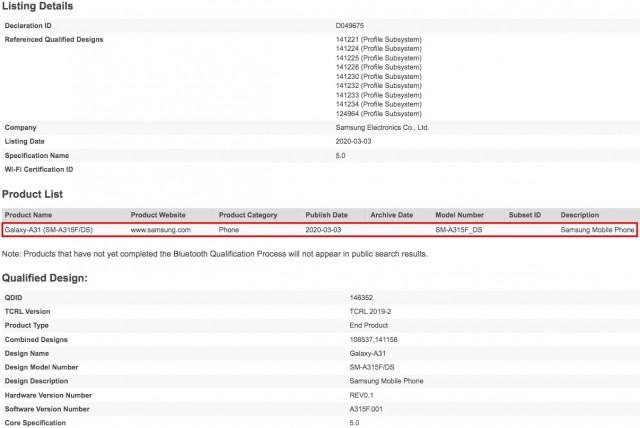 However, according to Geekbench, the Galaxy A31 will run Android 10 out of the box and have 4GB RAM onboard. It will be powered by MediaTek's MT6768V/CA, which could be the Helio P65 SoC.

Rumors have it that Galaxy A31 will come with 64GB of base storage and a 5,000 mAh battery under the hood. For photography, the A31 will have a 48MP main camera on the back accompanied by a 5MP macro unit. It's unclear, though, if there will be a third camera as well since the Galaxy A30 comes with a dual camera setup on the back.

What size looks like A40 Samsung what next A100 lol

Lol, anyone would be tired with a low end device smh…