Samsung Galaxy A50, Galaxy A30, Galaxy A10 specs leak in full

Samsung is reorganizing its entry level and mid-range lineup and renaming the A series is part of the ongoing efforts. The Galaxy A10, Galaxy A30, and Galaxy A50 should arrive any time soon with better specs and bigger screens. We know that because a specs sheet of the trio leaked today, revealing all but their prices and availability. 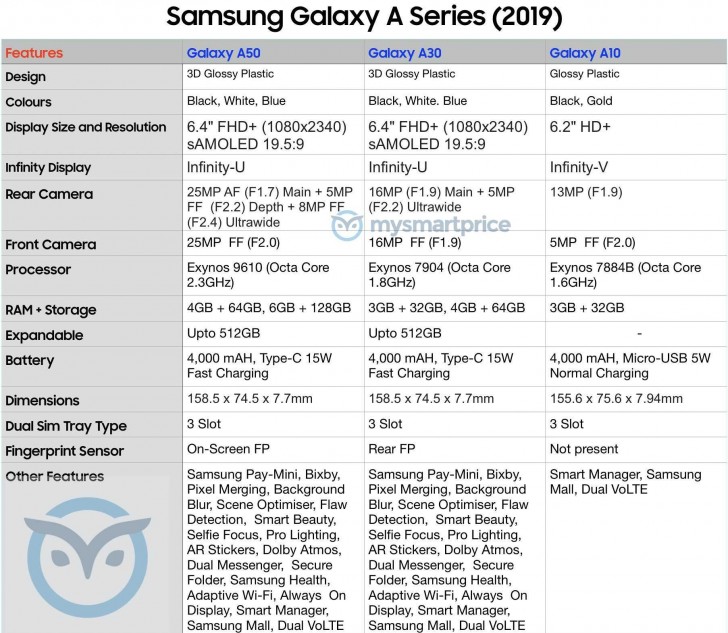 Starting from the top, the Samsung Galaxy A50 will have a tall Super AMOLED screen with Full HD+ resolution and a fingerprint scanner underneath. There will be an Infinity-U notch for the 25 MP FF f/2.0 selfie camera. The rear will host a trio of cameras - 25 MP f/1.7 main shooter, 5 MP depth sensor and 8 MP ultra-wide snapper.

Then we have the Samsung Galaxy A30 - it has the same body as the A50 but comes with dual cameras (16 MP + 5 MP wide-angle lens) and Exynos 7904 chipset. Sadly, the fingerprint scanner goes on the back, despite keeping the Super AMOLED. Memory is also slightly more conservative - either 3/32 GB or 4/64 GB. The notch of the Infinity-U display will host a 16 MP f/1.9 selfie camera.

The Galaxy A10 will be the most affordable of three. It will have a Glossy Plastic body in either Black or Gold and will offer Exynos 7884B chip on the inside, coupled with 3 GB RAM and 32 GB storage. It will lack storage expansion slot, even if the dual SIM tray line says “3 slot” for some reason. A 6.2" Infinity-V display with HD+ resolution will occupy the front.

The camera of the Galaxy A10 is listed with a single 13 MP f/1.9 shooter, lacking plenty of trendy features like AR Stickers, Smart Beauty, Scene Optimiser, etc. We won’t be surprised if it follows the Galaxy J2 Core and arrives with Go Edition of Android. Unlike its bigger brother A30 and A50, this phone will have a regular micro USB port with regular 5W charging. 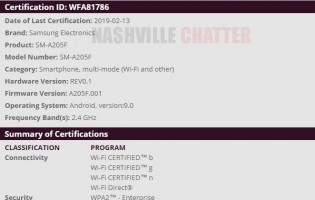 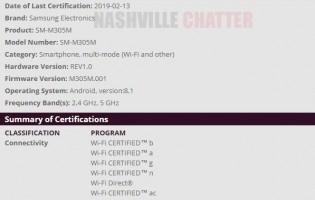 Although the specs sheet suggests three Galaxy A smartphones, we received a tip that the Wi-Fi Alliance approved two more - Samsung SM-A205F and SM-M305M. This means the Galaxy A family is likely to have a fourth member named Galaxy A20, while the Galaxy M30 will join the already introduced Galaxy M10 and Galaxy M20. The Wi-Fi certification is giving much in terms of extra info, but at least we know the OS will be Android Pie.

The best are from Samsung

Just one word BIG oh why so big zamzung.