The Galaxy A51 has a 6.5-inch Super AMOLED display with 1080 by 2400 pixels in a tall-for-a-Samsung 20:9 aspect ratio. It's an Infinity-O panel, meaning it's got a punch hole for the selfie camera, as opposed to a notch of any sort or shape. The A51 and A71 were the first non-flagships in the company's lineup to adopt that approach, with the Lite S10 and Note10 following. 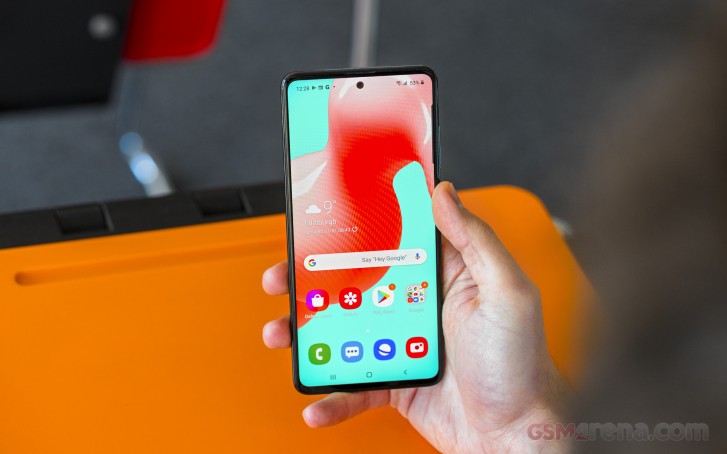 Infinity-O or otherwise, it's still a Samsung OLED display and behaves in much the same way we've come to expect from those. We measured a maximum brightness of 636nits when the Adaptive brightness toggle was engaged and 413nits if you take over control of the slider. Minimum brightness was 1.8nits.

Color rendition is handled familiarly - the Natural/Vivid approach Samsung introduced recently. Natural aims to reproduce sRGB content truthfully, and we measured a very good average deltaE of 1.8, though 100% Green was particularly off with a deviation of 5.4.

The Vivid mode offers a 5-position cool-to-warm slider, and we were particularly impressed with the spot-on whites and grays at the warmest setting, which yielded an overall average deltaE of 2.7 when examining color swatches against their DCI-P3 targets. The mid-point on the slider will get you slightly worse average deltaE of 3.3 and not as accurate whites - moderately shifted towards blue to the tune of a deltaE of 4.

The Galaxy A51 has a 4,000mAh battery inside, same capacity as the model it replaces and pretty much par for the course in the segment. Despite using the same chipset, the A51 does come with a slightly larger display and a different OS, so we expected at least some difference in the battery life, and indeed that's what we got.

We clocked 13 and a half hours on the web over Wi-Fi, a full hour more than what the A50 managed. Then again, we're witnessing an hour and a half drop in video playback to 14:22h - still a respectable number. The 22-hour call time isn't spectacular, but it'll do. In the end, the Galaxy A51's overall Endurance rating adds up to 86 hours. 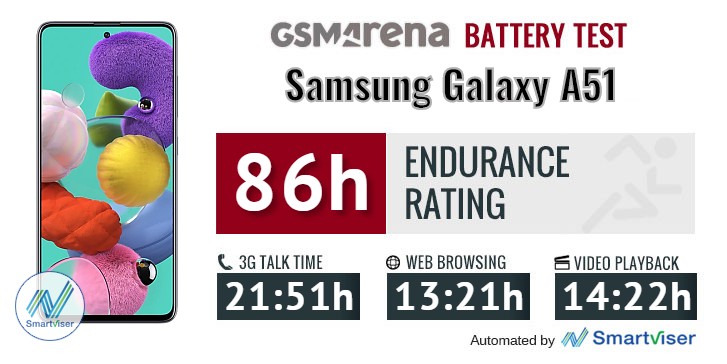 Our battery tests were automated thanks to SmartViser, using its viSer App. The endurance rating above denotes how long a single battery charge will last you if you use the Samsung Galaxy A51 for an hour each of telephony, web browsing, and video playback daily. We've established this usage pattern so that our battery results are comparable across devices in the most common day-to-day tasks. The battery testing procedure is described in detail in case you're interested in the nitty-gritty. You can check out our complete battery test table, where you can see how all of the smartphones we've tested will compare under your own typical use.

Using the supplied adapter, the Galaxy A51 charges from flat to full in 2:14h, which won't win it any contests, but is fairly decent. At the 30-minute mark, we were looking at 35%, and that too isn't praiseworthy.

Next up - testing the quality of the output through the audio jack. The Samsung Galaxy A51 put in a spirited performance with an active external amplifier, getting top marks while maintaining downright impressive loudness.

The volume remained high with headphones, and we got a bit of extra distortion and a moderate amount of stereo crosstalk. All things considered, it’s an excellent showing by the mid-ranger, though. 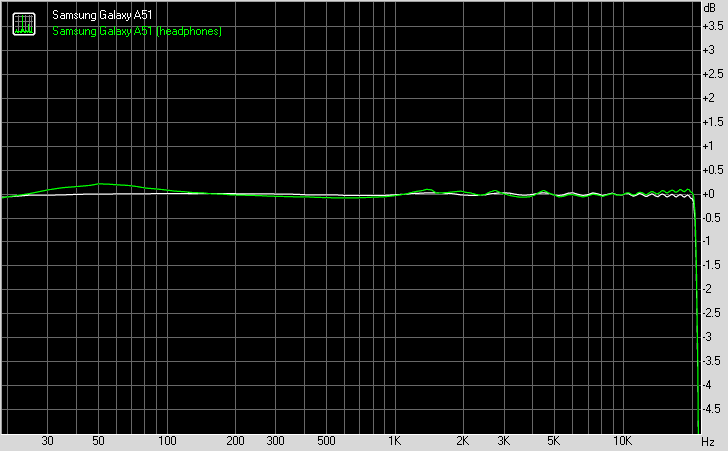 we have same problem I got phone restart while gaming 3x and not it got frozen on logo and now now power.

I bought samsung A51 on july 2019. Now it has a motherboard issue. Its getting over heated and shutting down. After that i have to wait more than 3 days to on my phone. This is a manufacturer fault. But those problems comes after ends of warranty. I...