As opposed to other Galaxy A members, the A60 adopts a standard IPS LCD panel instead of Samsung's crisp Super AMOLEDs. So don't expect those neat deep blacks. However, the results from our tests suggest that panel here isn't bad by any means. There is sufficiently high resolution of 1080 x 2340px with an extra tall 19.5:9 aspect ratio. The display can also get pretty bright. 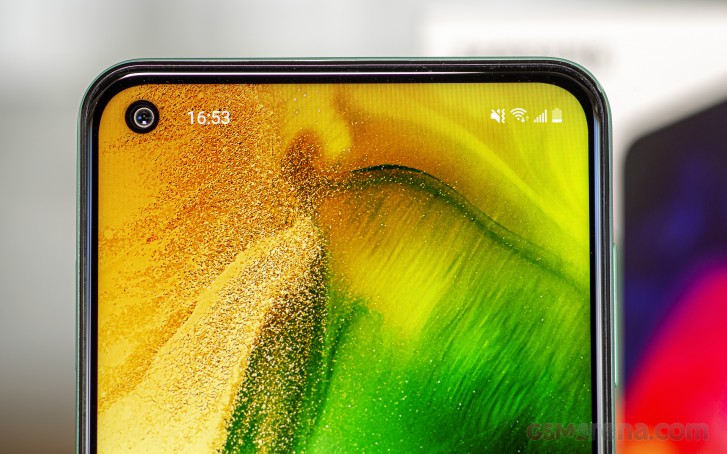 We've measured a maximum 485 cd/m2 with the brightness slider cranked up to max but when we toggled the auto brightness on, we got an impressive 661 nits. That's more than enough to deliver good reading conditions under a direct sunlight.

An interesting fact: the Galaxy A60 doesn't seem to have a dedicated ambient sensor - perhaps there wasn't enough space left on the top bezel so the handset is using the front-facing camera to measure the surrounding light and control the screen's brightness. So perhaps it's a good idea to keep the camera clean to get the best possible readings.

Anyway, while the panel can get really bright, it fails to meet our expectations in terms of color accuracy. And there are no options to switch modes or fix it manually. The average dE2000 is 7.3 while the max dE2000 is 12.9. You'd notice blue-ish whites and grays right off the bat and some overblown colors like blues, reds and yellows.

It looks as if Samsung tried to tune the display to appear more AMOLED-like but failed to make it accurate enough in the process. Moreover, there's a visible halo around the punch-hole and around the bottom notch on white or light gray background. It's not something everyone would notice but it's a common thing among cheap LCDs making us wish for an AMOLED panel even more.

The Samsung Galaxy A60 comes with a reasonably-sized 3,500 mAh battery on board, which according to our tests appears to be pretty much on par with the competition in terms of endurance. There are a couple of smartphones out there sporting bigger and more enduring batteries but the majority of devices are in the same ballpark.

The overall endurance rating is 86 hours with excellent standby and 3G talktime scores. The web browsing test returned good numbers as well but the video playback score is somewhat underwhelming. Regardless, we can say for sure that the battery life is dependable at the very least. 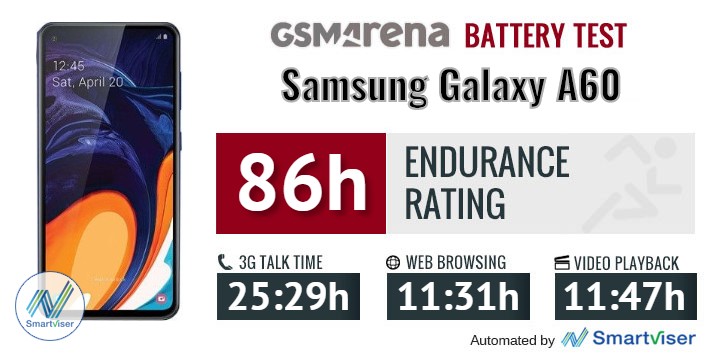 Our battery tests were automated thanks to SmartViser, using its viSerDevice app. The endurance rating above denotes how long a single battery charge will last you if you use the Samsung Galaxy A60 for an hour each of telephony, web browsing, and video playback daily. We've established this usage pattern so that our battery results are comparable across devices in the most common day-to-day tasks. The battery testing procedure is described in detail in case you're interested in the nitty-gritty. You can check out our complete battery test table, where you can see how all of the smartphones we've tested will compare under your own typical use.

When it comes to charging, however, the A60 isn't a record-breaker by any means. With the included 15W (Quick Charge 2.0-compliant) charger, the handset managed to retrieve just 40% in 30 minutes from a completely dead battery.

The Galaxy A60 has a single-firing bottom speaker that doesn't get too loud. According to our tests, it's about average but in the recent year, only a handful of phones scored below Very Good so Average is hmm, not as Average as it used to be. Similarly to the Galaxy A30 and M30, for example, the maximum volume is rather unsatisfactory.

As for sound quality, it's about average (for real this time). And by average we mean it does as well as other midrangers with a single speaker.

The Samsung Galaxy A60 put in a solid performance in our audio quality test. When hooked to an active amplifier it delivered perfect scores for accuracy and demonstrated above average loudness.

Volume remained at the same levels with headphones and generally the damage was very little, which is impressive for the price range. All we saw was a minor decrease in stereo separation with all the other readings remaining unchanged.