The Galaxy A lineup has been known for its AMOLEDs (A for AMOLED, get it?) and the Galaxy A70 is no different. But the A70 not only has the cool panel, but it's also impressively large with a 6.7" diagonal - the biggest screens on a Galaxy this year and the same size as A80's and S10+ 5G's. 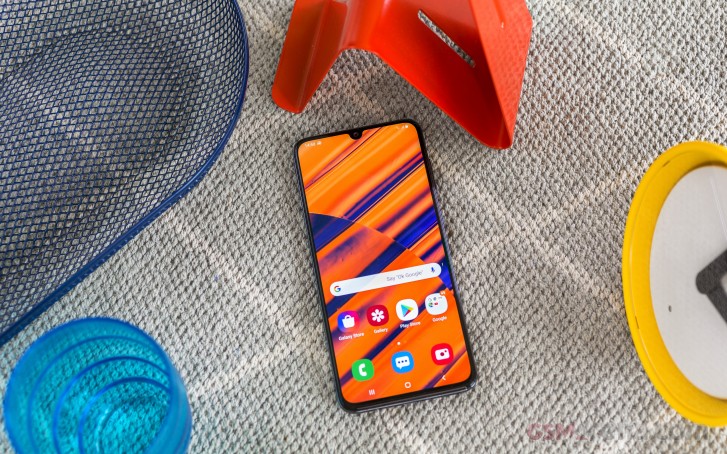 The A70 packs the so-called Infinity-U panel, meaning it has a U-shaped cutout at the top for the selfie camera. But notch or not, the Super AMOLED screen is of the usual high-quality we've grown to like. We measured about 407 nits of maximum brightness in manual mode, and 607nits in Auto brightness with the ambient light sensor is exposed to bright light.

We also measured a minimum brightness of 1.8nits - a pretty great result.

As we've come to expect from Samsung Super AMOLEDs, the display on the Galaxy A70 is capable of accurately reproducing different color spaces depending on content and selected display mode. The Natural mode stays accurate to sRGB with an average DeltaE of 1.8, while Vivid adheres to the DCI-P3 color space with an average DeltaE of 3.9. There is no Adaptive mode as before, nor are there the AMOLED Photo and Cinema. The Vivid option do offer manual control over the red, green, and blue hues.

The Galaxy A70 has a large 4,500mAh battery inside, an increase over the 4,000mAh cell inside the A50. It supports 25W fast charging thanks to USB Power Delivery, and the provided charger replenishes 42% of the depleted battery in 30 mins.

In our testing, the Galaxy A70 achieved excellent results. We clocked 13+ hours on our Wi-Fi web browsing script and 17+ hours of looping videos in airplane mode. The 3G talk time is over a day and a half - an excellent score as well.

Adding to the mix the very good standby performance the Galaxy A70 posted an overall Endurance rating of 103h. 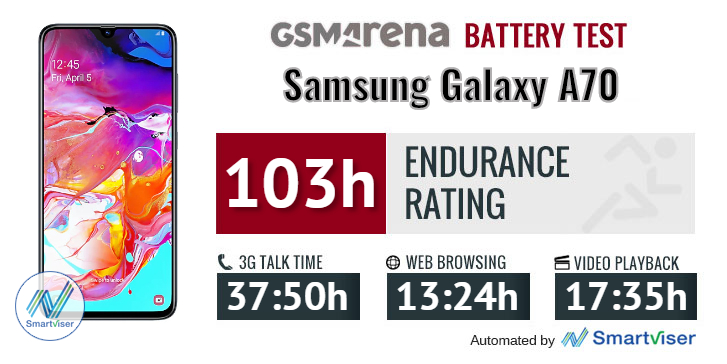 Our battery tests were automated thanks to SmartViser, using its viSer App. The endurance rating above denotes how long a single battery charge will last you if you use the Samsung Galaxy A70 for an hour each of telephony, web browsing, and video playback daily. We've established this usage pattern so that our battery results are comparable across devices in the most common day-to-day tasks. The battery testing procedure is described in detail in case you're interested in the nitty-gritty. You can check out our complete battery test table, where you can see how all of the smartphones we've tested will compare under your own typical use.

The Galaxy A70 has a single loudspeaker located on the bottom. It scored a 'Very Good' mark in our three-pronged test when it comes to loudness, but it's sound quality is rather average - not as poor as A50's, but not as rich and clean as the best in the class.

The Samsung Galaxy A70 delivered an output of perfect accuracy when hooked to an active external amplifier test as is to be expected from any half decent phone these days. When headphones came into play, we got some intermodulation distortion and an average amount of stereo crosstalk.

Loudness was just above average in both cases so all in all we’d say the audio output won’t win the Galaxy A70 many new fans, but it won’t be held against it either.

Yah ..It's true. My phone is not charged...When I go Samsung service center, mother board is gone. I don't know how...and why it's not charged. No answer and simply says that to change motherboard at cost of 12,500/. Now again I chan...

But is it dangerous even with a normal mount of water??? Or do i have to stay indoors everytime it is a little bit of rain outside? And what if its snowing?... Ive been there before..

Good phone during all of its life time .. !---->> but it SUDDENLY DEADS with NO way to RECOVER DATA!!!! Worst experience ever .. when all your 3 years memory are lost for no reason (Not chocked neither touched by water) So don't be ...