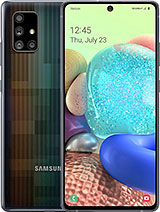 Whats the meaning of UW in this??

Billy, 24 Dec 2020UW is a different kind of 5G, that Verizon uses. You need t... moreI'm glad mine is factory unlocked means I can use it with any service including Verizon other then gsm such as AT&T n t-mobile as well..

Mr bean, 16 Nov 2020Why there is no NFC in this A series. Samsung, you are very... moreYes it has NFC look in the search and it will pop up

Anonymous, 23 Dec 2020this is the Verizon only version "UW" I just orde... moreUW is a different kind of 5G, that Verizon uses. You need the UW to get their 5G working... but for now 4gLTE is easier received and plenty fast.

Anonymous, 19 Dec 2020Can this phone be used in Europe? I believe this is a Veriz... morethis is the Verizon only version "UW" I just ordered mine and i don't really get why they have their own version but hey to each their own. the specs are damn near same except screen i believe.

Anonymous, 20 Dec 2020You're wrong. Damn it.Since my phone is factory unlocked. I can use any where in the qorld n im happy that thos processor is Qualcomm wich is alot better coss in euroup n asia? They're still using the exynos wich is in the house for Samsung..

Anonymous, 19 Dec 2020Can this phone be used in Europe? I believe this is a Veriz... moreYou're wrong. Damn it.

Can this phone be used in Europe? I believe this is a Verizon only version. Please correct me if I am wrong.

Why there is no NFC in this A series. Samsung, you are very strange

I don't see moaners about nfc like there are in motorola one fusion+ comments. For Samsung its a big fail, for Motorola it's a compensation for good performance budget phone. So if nfc is so important to you here is better place for trash talk about it.

I recently purchased this phone to replace my Note 8 on Verizon's network. I have to say this phone is nice. It is faster than the Note (at least in the ways I use a phone). I am still adjusting to the in-screen fingerprint reader, and I do miss having that on the back of the phone. It was much easier to unlock on the back.

My only complaint is that I am unable to use the built-in FM radio. I used Nextradio on my Note 8 to listen to local stations without using data. I'm supposed to be able to do that on this phone, but I have yet to find an app that can access the radio. Nextradio's says it can't access the radio and that I need to contact my provider (Verizon) to ask them to give access. That was useless. Verizon doesn't really offer any support of this nature.

I have to say that the screen is very clear, and the Gorilla Glass 3 seems just as good as what was on the Note 8.

I do miss the wireless charging. I tried a plug-in adapter, but you have to get the phone positioned exactly on the charger to make it work. I will stick with the super-fast charger that came with the phone.

Overall, I am impressed with this upper mid-range phone. For the features and price, it is hard to beat.

okizen, 04 Aug 2020Why for the USA only? They must surely make the Samsung Gal... moreThere are international versions of the Galaxy A71 5G. This phone is the Verizon exclusive version that has the UW (ultra wideband) symbol attached to it since I can only conclude that Verizon has a different 5G network compared to other carriers like AT&T or T-mobile/Sprint.

I received an offer to make a trade-in from my T-carrier with ZERO cost to have a brand new A71 5G.

After reading all reviews and posts like this, I decided to decline the offer and keep my S10e that is way better than this A715G.

In case you have curiosity to understand what I mean, just make a COMPARE right above between S10e and A71 5G. You will see the big advantage of the S10e against the A71 5G.

PS: T-carrier website has horrible reviews about A71 product. Better to read before changing.