The Samsung Galaxy A71 5G UW for Verizon is official and you can pre-order it today at a promo price of $15 a month for 24 months on an Unlimited plan. This works out to $360 while its regular retail price is $650. This means that after the promo period is over, the handset will go up to $27.09 a month, which makes the whole $650.

Starting on July 16 you will be able to pick up the phone from any Verizon location. The carrier dubbed this “the most affordable 5G Ultra Wideband smartphone”, by the way. You can get up to $250 in credit towards the new phone by trading in an old handset (and you’ll need to sign up for a Premium Unlimited plan).

UW stands for Ultra Wideband, which is what the carrier calls its mmWave network. Currently, there’s coverage in 35 cities – for more details, check out the coverage map. mmWave can hit speeds over 1 gigabit per second, but is limited to only the densest urban areas as the signal can’t travel very far. 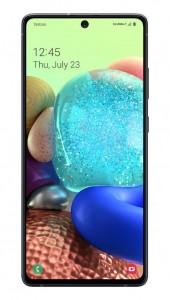 To that end, the Galaxy A71 5G UW will also be able to connect to Verizon’s low-band 5G network – this won’t be much faster than current 4G networks, but has significantly wider coverage than mmWave (the carrier is aiming for nation-wide coverage). The low-band 5G network will be activated later this year.

There’s not much more to say – there’s no official confirmation that the phone switched to the Snapdragon 765G, but it most likely did as the Exynos 980 used in the regular Galaxy A71 5G does not support mmWave.

The rest is unchanged, including 6.7” Super AMOLED screen, the 4,500 mAh battery with 25 W charging and the cameras. There’s four of them on the back, starting with the 64 MP main cam, 12 MP ultra wide one, a 5 MP macro camera and a 5 MP depth sensor. The selfie camera on the front has a 32 MP sensor.

So where exactly is this $360 deal? I'm not seeing it anywhere.