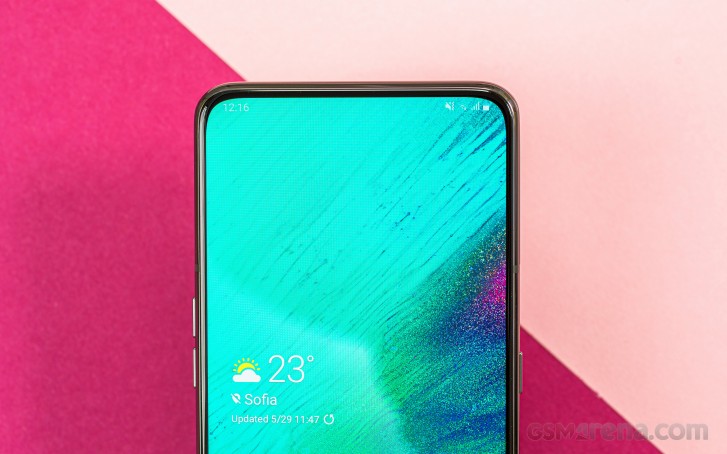 We measured a maximum brightness of 405nits when controlling it manually with a healthy boost to 607nits when the Auto takes charge under bright lighting. Those are fairly standard numbers for the better OLED displays, and virtually identical to the results we got out of the A70.

The minimum brightness of 1.9nits is also close to the A70's result and perfectly adequate for night-time viewing.

The default color mode out of the box is Vivid, with an average deltaE of 4.4 and a maximum of 9.7 when examining color swatches against DCI-P3 targets - not too impressive. Whites and grays are reasonably accurate, however, with deltaE values around 3. You do get the option to tweak the colors with sliders but we didn't get truer P3 rendition.

Then there's the Neutral mode, which is tuned for the sRGB color space and renders it with spectacular overall accuracy (average deltaE of 1.4) with the sole exception of 100% green (deltaE of 5).

Update, June 26: We're fairly positive the out-of-the-box color mode was Vivid on the unit we reviewed before, but now it's Neutral. Default or not, it's not as neutral as it used to be and we recorded an average deltaE of 2.3 when shooting for sRGB reproduction - not remotely bad, but not as good as the 1.4 we measured on the first unit. Switching to Vivid, we measured an average deltaE of 3.7 when against DCI-P3 targets - this result is actually an improvement over our previous test.

The Galaxy A80 is powered by a 3,700mAh battery - not small in absolute terms, but kinda smallish for the screen size and smaller than the power pack of the A70 (4,500mAh).

We're not too pleased with the longevity numbers we got out of the Galaxy A80, particularly in the web browsing test - just 9 hours on our web script is a low result which we hadn't seen in a while on a Galaxy. For comparison, the A70 can last 50% longer to 13:24h, while the Zenfone 6 manages a whopping 15:42h. Even the unremarkable 10:10h of the OnePlus 7 Pro is better.

We're not ones to talk on the phone all that much, but the Galaxy A80 is good for a whole day and then another hour of just that over 3G. The other phones we mentioned can do 10-12 hours more, if that's your thing.

Update, June 26: We figured it couldn't hurt to redo our battery tests to account for any improvements Samsung might have done in the time between our review and the market launch of the device. Indeed, that turned out beneficial in the web browsing test where we measured a small bump bringing the time to just under 10 hours. There was also a notable improvement in the standby performance. Meanwhile, the results for 3G voice calls and video playback remained virtually unchanged. In the end, the Galaxy A80's Endurance rating now stands at 90 hours. 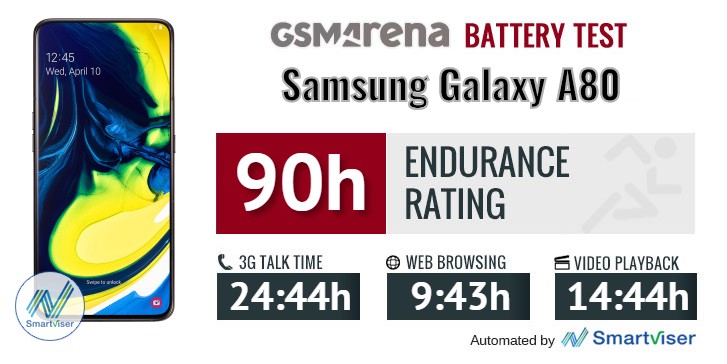 Our battery tests were automated thanks to SmartViser, using its viSerDevice app. The endurance rating above denotes how long a single battery charge will last you if you use the Samsung Galaxy A80 for an hour each of telephony, web browsing, and video playback daily. We've established this usage pattern so that our battery results are comparable across devices in the most common day-to-day tasks. The battery testing procedure is described in detail in case you're interested in the nitty-gritty. You can check out our complete battery test table, where you can see how all of the smartphones we've tested will compare under your own typical use.

The Galaxy A80 supports USB Power Delivery at up to 25W. We didn't get the full retail package, so we couldn't test with the bundled charger. Extrapolating from the A70's 42% at the 30minute mark, we speculate the A80 will be able to get to around 50% in as much time thanks to its smaller capacity. We'll be sure to update this section once we get a hold of a proper charger.

Update, June 26: Speculation's out the window - the bundled 25W PD charger takes 1:36h for a full charge from flat with 55% showing on the battery indicator thirty minutes into the process. Not record breaking numbers, but pretty good ones still.

The Galaxy A80 has a single loudspeaker on its bottom and with no conventional earpiece stereo sound is out of the question anyway. It's putting out reasonable decibels, ranking in the Very Good category as our ratings go.

We have no complaints about the quality either - there are no issues at high volume and there's a decent amount of bass.

Update August 21: We finally got hold of Samsung’s official USB-C to 3.5mm audio adapter and were able to test the audio output of the Galaxy A80. Keep in mind that if you purchase a different adapter you might get somewhat different results.

When hooked to an active external amplifier, the Galaxy A80 delivered output of the expected excellent accuracy, while its loudness was just above average. The headphones performance was almost identical, which is an achievement of its own.

All we observed was a minor decrease in stereo separation. Had the volume been higher this would have been one of the best performers around. Actually it still may be, as long as you don’t use a particularly high impedance headphones that you plan on pushing to very high volumes.

Oh please, "get with the times braah" my bottom. You don't even get stable internet connection on rural areas. Not all new things are great, some so-called "outdated" features still work a million times better.

Couldn't agree more. My mum's hometown has a terrible internet service, so having an offline FM Radio functionality is deeply welcome.