Reviews of not yet announced smartphones usually come from Russia, but this time around we've got just such an occurrence from China. The upcoming, much-rumored, oft-leaked Samsung Galaxy A8 has apparently been reviewed by one Chinese website today.

As you can imagine, this means a lot of live, hands-on pictures have been made public. You can see some of them below (click the thumbnails for the full-size files). 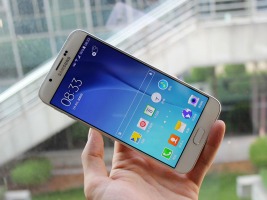 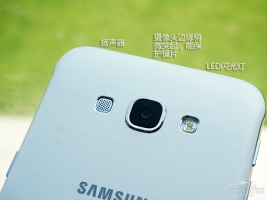 The Samsung Galaxy A8 has been rumored to launch as the Korean company's thinnest handset to date. These aren't the first live images of it we've seen so far. In fact, there was also a hands-on video recently. And the phone also starred in a promotional brochure in South Korea just a few days ago. 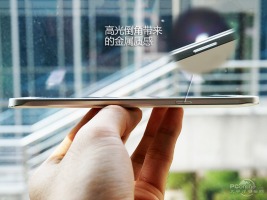 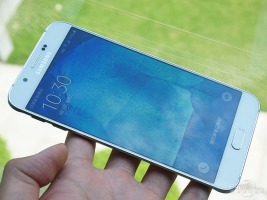 Today's Chinese review also brings us a neat recap of the A8's specs, along with a confirmation that it does indeed feature a fingerprint sensor in its Home button.

The phone has a 5.7-inch 1080p Super AMOLED touchscreen, and Qualcomm's Snapdragon 615 chipset is on board, paired with a 1.5 GHz octa-core Cortex-A53 CPU. The A8 has 2GB of RAM, support for microSD cards, a 16 MP rear camera with LED flash, a 5 MP selfie snapper, 4G LTE connectivity, and a 3,050 non-removable battery.

As you can see, compared to the A7, the A8 has a much more rounded design and smaller bezels. Now that the cat's fully out of the bag, perhaps Samsung will make the Galaxy A8 official soon.

Galaxy A8 is really a great smartphone for this generation.It has 16mp of camera,4th generation Gorilla glass,16/32GB phone memory etc.