Samsung Galaxy A8 to come with a 5.5-inch screen after all

The Samsung Galaxy A8 is the most recent member of the A-series, yet to become official. It's position at the top of the lineup led to suspicions that a 5.7-inch screen would be used, but a GFXBench listing aims to refute that claim.

According to the entry on the benchmark's website the Galaxy A8 will come with a 5.5-inch 1080p display, the same as the one used in the Galaxy A7. The device will bring a few of the specs up a notch, compared to the A7 and the 16MP camera is one such improvement, confirmed by the listing. 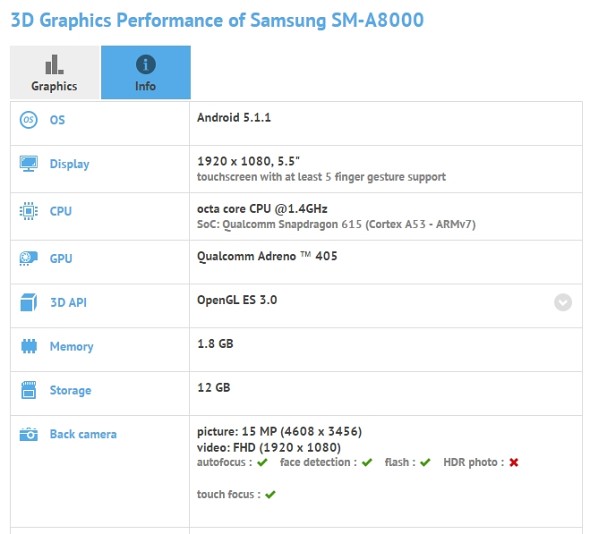 The rest of the specs are very much in line with previous info and include a Snapdragon 615 chipset, though its processor is clocked somewhat unusually at 1.4GHz. 2GB of RAM are on board and internal storage is 16GB, of which 12GB are left to the user.

Obviously, the benchmark doesn't reveal if the Galaxy A8 will come with a fingerprint sensor as suggested before. However, with such modest changes over the A7 elsewhere, the key feature would make sense to justify the higher model number.

Should have dual sim capacity and separate memory card slot.

jesus , they could've expand the momery to 32GB or increase the battery capacity at least .