After Zauba and Geekbench, the Samsung Galaxy C7 Pro has now been spotted on AnTuTu. The benchmark listing reveals that the device sports a full HD display, and features a 16MP rear as well as front camera unit. 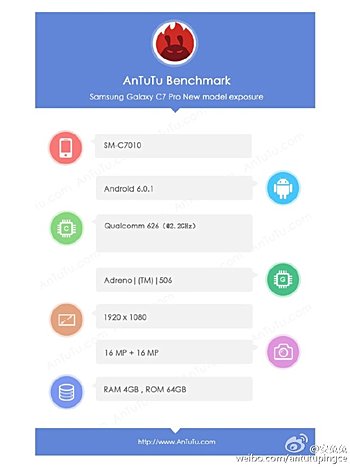 The other specs that are revealed by AnTuTu - including Snapdragon 626 SoC, Android 6.0.1, and 4GB RAM - are inline with what Geekbench had revealed. The phone's Zuaba listing, in case you missed, revealed a screen size of 5.7-inch.

The Galaxy C7 Pro, along with the Galaxy C5 Pro, is currently rumored to be unveiled sometime in December.

Another trash phone, not worth to buy. Rather choose china brands instead like oneplus, meizu,huawei or oppo.