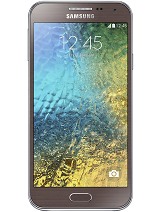 bought & use it right away in mid 2015, battery lasted for an hour in mid Dec 2020. It comes w/ a defective charger, prompting me to use a substitute. the graphics were nicely sharp & crisp though, while playing music isn't loud.

Anonymous, 17 Mar 2020It has been over 5 years since I am using this phone it is ... moreHolymoly mate i've been using it for 5 years and the wifi cant be used now, i've got problem too with its small rom just 16gb and small ram too for nowadays application

It has been over 5 years since I am using this phone it is a great phone.

ever medrano , 05 Jun 2018 I have this phone for 3 years, for me it is one of the be... moreBeen using this phone since 2016 up to now but it’s the best phone I have ever found. Battery gets low as time goes on. Congrats sumsung for this good phone

I am using this phone from last 4 years , excellent resulit in photos and video but its battery become low and its storage is also 16 GB. but it that era this mobile was the king of all mobiles. I love it .

I have been using this phone since 2015. Very good one from Samsung. But it's RAM is not enough these days. I have to upgrade my phone. I'll definitely miss this. Samsung should bring this phone back with E5s or something like that series with more RAM, Camera, and Battery.

I have been using galaxy E5 For 3 years it's nice but it's incopatible with some games and it's storage is very small just 16GB i wnna pay another device such as A10s or A10 it's self i hate gslaxy E5 So mutch.😠😠😠

I have also been using the E5 since 2015. I purchased a Smartwatch and needed to upgrade my phone so I purchased another phone I had so many problems with it I went back to my E5. I think it's one of the best phones Samsung ever made. When I bought it, I bought a spare in case this one ever goes out.

I have been using this phone since 2015 and its one of the best phone in terms of durability and performance. No lag or heating issue.

I've been using this phone for 4 years, and i am so surprised about its durability. I dropped my phone countless time and it's still running good, although its kinda laggy (well, it's 4 years old phone after all).