Samsung is preparing to launch a Galaxy F22 smartphone that is rumored to also arrive under the name Galaxy A22 in non 5G markets (because we already have Galaxy A22 5G for countries with the next-gen network).

The phone has appeared on the Google Play Console, confirming its key specs - Mediatek Helio G80 chipset and 4GB RAM. The latter could, of course, relate to just one of the phone's versions and other trims may be available. 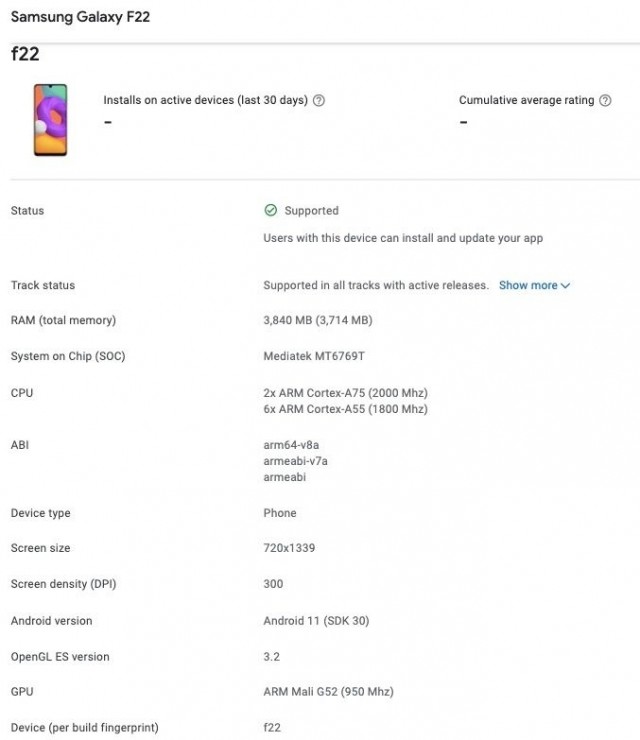 The new affordable smartphone will come with Android 11 out of the box, and looking at the single image, it will have an Infinity-U screen with a notch for the single selfie camera.

The listing also reveals the display resolution of 1,336 x 720 pixels and it's likely an LCD, given the fact the fingerprint scanner is on the side.

Previous leaks revealed a 5,000mAh battery with 15W fast charging and four cameras on the back, including a 48MP main one and an 8MP ultrawide snapper.

At this point, it's not even logical to keep track of Samsung's release. The probably launch a new device every week. With minute difference in specs each time.

The fact that the fingerprint scanner is on the side dosen't mean it will be and LCD screen, the Galaxy A22 has a Super Amoled screen with side mounted fs !