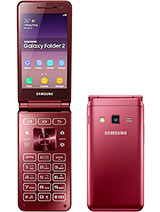 Anonymous, 07 Jul 2020It's called t9. The number buttons double as letters a... moreWhy would you include your age in that correction? Anybody old enough to use Google can answer that.
I'm 9 btw

It's called t9. The number buttons double as letters and you sometimes have to press multiple times. By the way, I'm 13.

I've used mine on and off for about a year now. I mostly use it when I just want to reduce social media use and focus on other things. great phone.
However, I can never get used to the T-9 pad, since I use a regular smartphone most of the time.

FOLDER 2, 04 May 2020How do I type letters in the phone keys? Can you just type ... moreYour question shows your age. You should have seen how people type letters using the phone numbers... Epic!

How do I type letters in the phone keys? Can you just type numbers how do you change the letters? Letters I can only type in touch screen but not keys

Waiting for galaxy folder 3 since 2017

FOLDER 2, 27 Apr 20201.How to do a screenshot on this phone? 2.How do you type ... morei downloaded Button Mapper app on google play, from there create a new action.
i made flashlight: hold UP on the d-pad
i made screenshot: hold center on d-pad

flashlight always works.
screenshot, 90% since center on d-pad is usually "OK" function globally on the phone.

This does not have a headphone jack.

Anonymous, 27 Dec 2019Can't find one without being way too overpriced.Hello,

If still interested in the Folder 2 I just posted one on EBay. Used for 2 days and placed back in box. Pristine condition and comes with screen protector.

There is list of signs of Samsung Galaxy Folder 2:

Can't find one without being way too overpriced.

I just got the phone and I love it for its small size and still having most features. the only con I have is there is no send key when texting/whatsapp using t9. you still have to touch the screen to send. Unless i'm missing something.

Germantas, 06 May 2019I just trying to imagine how you can play PUBG on this Jes... moreI doubt if people who buy this phone would do that in the first place.

j8user, 07 Aug 2019exactly. would trade my J8 for this if they would ship one ... morethis phone worth more than yours lol

mirileh, 06 Aug 2019Is there any way to open the phone WITHOUT it answering a c... moreYes. Go to the phone icon then press the 3 dots on the upper right corner then choose settings. Press Answering and ending calls then disable the open folder to answer.