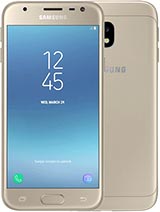 if this specifications remain official launch,than it will be a good budget mobile

samsung launches it in 2017. at that time various mobiles with better specifications will be emerged. then this mobile will be useless to buy.

MS, 22 Nov 2016Once again another similar phone release. Design has not ch... moreNo one needs to hear that! LOL
dont make comments on the phone when you havent tried using it yet. When it releases, buy one then tell us about your experience, that would be more reasonable!

People, please do not compare it with 2016 model, because it makes no sense. The only fair comparison can be made between this new phone and other companies' new releases at the same price range, because it is obvious that releases from every company are getting better at release date price point.

Once again another similar phone release. Design has not changed for ages, from the way it looks in this photo, it reminds good old S4, which is not good anymore today. I liked S4 back in the day, but that design is too old now and it is relatively boring and ugly. Samsung should really for once dare to change their idea of button alignment in front of device (or just put them out).
Camera has unreasonably low resolution.
Performance might be slightly better, but still weak, it will not significantly change user experience, but finally no more S410. The amount of RAM seams reasonably good.
Resolution is reasonable for the chip, amoled is a big plus, although they tend to save up on screen protection in J series phones.
Overall there is no way that I would consider buying this or recomend anyone to buy this phone, it is repugnant, nothing special in performance, has seriously outdated design. Much much better options out there, for example companies like xiaomi or huawei are making better releases by far, i hope people will soon finally understand that.

Huge upgrade over the 16 model where it still had the A7 chipset.Nice to see a good device.

AnonD-389018, 20 Nov 2016Why oems don't prefer to work on latest OS instead of that ... moreDecisions like this are to meet bloated cost reduction strategies, in this case it's selling a phone with the worse version of an older OS. After Lollipop 5.0 debuted OEM's were still releasing Kit Kat 4.4.2 devices such as on TracFone or Straight Talk, when they were aware of the "Man in the Middle" exploit was fixed in Kit Kat 4.4.4

Why oems don't prefer to work on latest OS instead of that they release new phones with older operating system? They need to learn.

jZ, 18 Nov 2016Why Samsung still sports the old microusb connector?because its th most widely used connector,us c isnt evn on 15% of devices being used out there

the chipset is very good for this 720p device... the other specs are also lokks pretty well as a budget phone.... hope it will be good.

It is a lot more high end than j5 prime

Problem is OS Android 6 only.. This phone will be avaivable late Q1 2017 and Android 7 nougat will be everywhere by then.

If it cost no more than 150 euro with taxes , then it will be great phone. Best for gaming.

lneam, 18 Nov 2016For the selling price it's 99% good. It lack's "compass" se... moreCompass is more likely than not, to be absent on a Samsung low to mid end device. Even the C-series lacks the Gyro sensor.